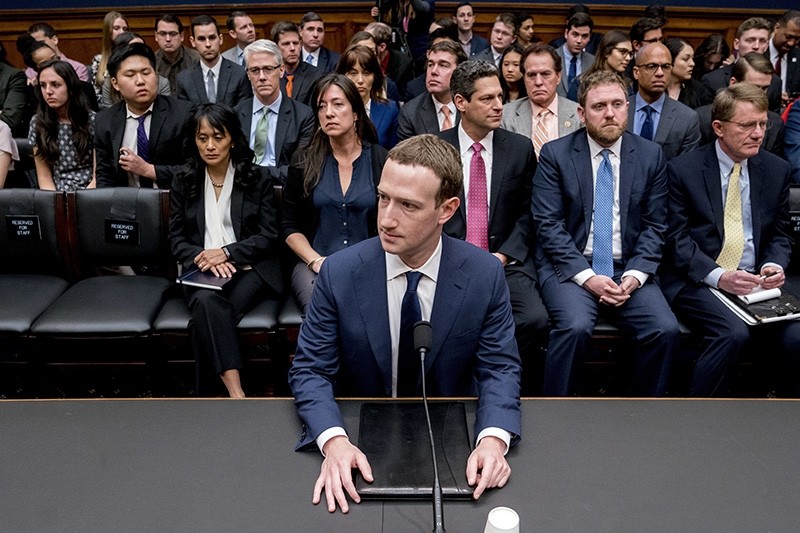 Facebook CEO Mark Zuckerberg arrives to testify before a House Energy and Commerce hearing on Capitol Hill in Washington, Wednesday, April 11, 2018. (AP Photo)
by Compiled from Wire Services Apr 18, 2018 12:00 am

The world's largest social network is under fire worldwide after information about nearly 87 million users wrongly ended up in the hands of the British political consultancy, a firm hired by Donald Trump for his 2016 U.S. presidential election campaign.

European Parliament President Antonio Tajani last week repeated his request to Zuckerberg to appear before the assembly, saying that sending a junior executive would not suffice.

"All political groups stressed the absolute need of your personal presence, as was the case before the United States Congress," Tajani wrote, calling the parliament a "key decision maker" in regulating the world's biggest economic area.

Zuckerberg's presence there would send a "decisive signal" that Facebook would cooperate to protect citizens in the digital market, he added.

"The millions of Europeans affected by the Cambridge Analytica scandal deserve a full and thorough explanation from Facebook's top manager," said the letter.

"This case is too important to treat as business as usual," Jourova told an assembly of lawmakers.

"I advised Sheryl Sandberg that Zuckerberg should accept the invitation from the European Parliament. (EU digital chief Andrius) Ansip refers to the invitation as a measure of rebuilding trust," she said.

Earlier this week, Zuckerberg met with European Commission Vice President Andrus Ansip, who told him that accepting the parliament's invitation would help fulfill his pledge to rebuild trust in Facebook.

Facebook did not respond to a request for comment. Zuckerberg fielded 10 hours of questions over two days from nearly 100 U.S. lawmakers last week and emerged largely unscathed. He will meet Ansip in San Francisco on Tuesday.

Another European lawmaker Sophia in't Veld echoed the call from her colleagues, saying that the Facebook CEO should do them the same courtesy.

"I think Zuckerberg would be well advised to appear at the Parliament out of respect for Europeans," she said.

Lawmaker Viviane Reding, the architect of the EU's landmark privacy law which will come into effect on May 25, giving Europeans more control over their online data, said the right laws would bring back trust among users.