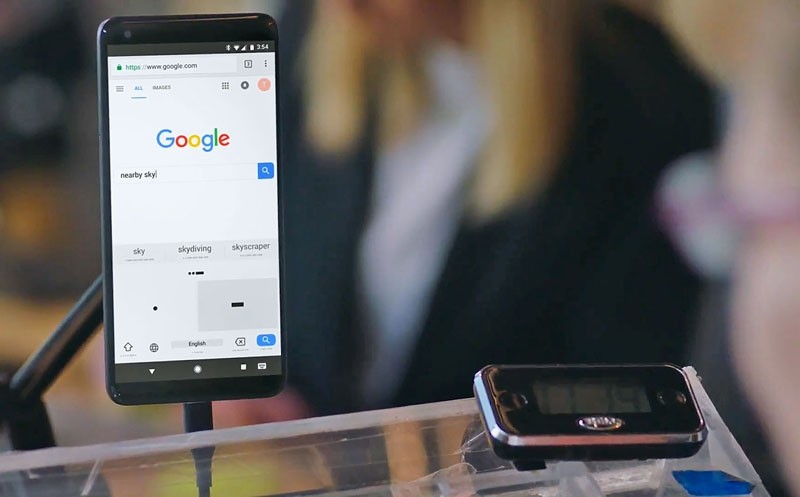 Driven by artificial intelligence (AI) and machine learning, Google's virtual keyboard application, Gboard can change the lives of the people with disabilities.

At the Google, I/O 2018 developer conference, joined by thousands of Android developers, Google partners and journalists, solutions developed for people with disabilities were under the spotlight.The story of Tania Finlayson, a developer of the project that now allows the use of Morse code on Gboard, inspired everyone at the event.

Finlayson and her husband, worked with Google to develop a system that now allows Morse code inputs on Gboard. This is expected to help people with disabilities communicate. Ultimately, the most important thing that keeps them going is the ability to communicate with other people.

Finlayson has a special condition that makes it impossible for her to communicate verbally. She found a great way to write sentences and talk to people using Morse code. Her husband developed a special device that recorded head movements and turned them into Morse code. The device adds a short signal when the left button is pressed and a long signal when the right button is pressed. This device later turned the text to speech. With Gboard, however, which uses AI and machine learning, the application has become even more powerful.

Gboard allows you to replace the keyboard with two areas for short and long signals. There are multiple word suggestions on the keyboard, just like on a normal keyboard. The solution also uses a Morse poster to make learning the code easier.

About change many lives

Finlayson said she was very excited about Gboard as it had the potential to change many lives - especially for people with disabilities.

"I get excited when I think about what people can do. From small, fun games to new instructional tools, to full-fledged communication applications based on Morse code, it is invaluable," Finlayson said.

"I already asked my husband Ken to send his own message! Whatever you do, big or small, we want you to send the codes that you have prepared. You never know even a small piece of code can change the world for newcomers to Morse code."

Three Turkish ventures are now exploring San Francisco, which stands right at the heart of the technology and venture ecosystem, under the leadership of Google and the Entrepreneurship Foundation in collaboration with Information and Communication Technologies Authority (BTK), General Mobile and Turkish Airlines (THY).

Special projects and competitions that enable young entrepreneurs to explore the world can change the way they look at the world. Google is supporting the use of mobile applications in the field of social entrepreneurship in Turkey, especially by university students.

The Android Academy, with the slogan "Start writing the future," organized an event to encourage the entrepreneurial spirit of university students studying in the software field. In the event, a number of projects that bring innovative solutions to social problems competed.

The program was organized to promote applications that generate technological solutions to social problems in citizen interaction, smart cities and accessibility using Android. It attracted a total of 120 projects. The top three projects will receive mentoring, in addition to an entrepreneurship ecosystem tour of San Francisco.

Let smart assistant get your appointments

With artificial intelligence (AI) and machine learning, Google Assistant makes can now make an appointment with the hairdresser or a restaurant reservation. Google Assistant app will also be available in Turkish this year.

It is available in more than 40 car brands and can be used in more than 30 languages and 80 countries. It is expected to be in Turkey until the end of the year. Google Assistant offers six new voice options. In addition, Google Home and Google Home Mini will be available in seven new countries, including Spain, Mexico, Korea, the Netherlands, Denmark, Norway and Sweden.

The fact that Google Assistant understands complex and long sentences and answers accordingly give an important idea about the future. We will start testing a new ability in Google Assistant to help you make reservations, schedule hairdressing appointments, and get your working hours via mobile phones. Strengthened by a new technology called Google Duplex, Google Assistant can call restaurants or hairdressers and understand complex phrases, quick talk, and long words.

The assistant continues to serve while using Google Maps in the car. Google Assistant can be used while your hands are on the wheel and your eyes are on the road. This will give it the ability to send text messages or play music and podcasts while the navigation screen is open on Google Maps.

The Loud Steps Project received a full note from The National Federation of the Blind (NFB), which is considered the most important organization for the visually impaired in the U.S.

Realized by Türk Telekom in collaboration with Boni Global in 2014, the project aims to help visually impaired individuals move freely inside buildings. The Loud Steps application helps blind and hearing-impaired individuals find out where they want to go or where they are at the moment inside huge and complex structures like shopping malls, airports, campuses and holiday villages free of charge with their cell phones, without the need of any assistance.

In addition, all GSM operators can benefit from the application used in hospitals, municipalities, ministries, mosques and libraries. The Loud Steps Project is noteworthy with its ability to use a Wi-Fi-based location technology solution.

Everything is under control

The Loud Steps will be incorporated more into the lives of the visually impaired in the future.

NFB has more than 50,000 members and affiliates in 50 U.S. states, as well as in Washington and Puerto Rico. Paul Ponchillia, a visually impaired retired professor at the NFB, said the tests show that the Loud Steps will be more involved in the lives of the visually impaired people in the coming years.

"Seeing how Loud Steps make our lives easier in enclosed spaces gives me hope. When I get into a building using the Loud Steps, I feel that the building is under my complete control," Ponchillia said.

The Loud Steps stands out as a user-friendly application with the inclusion of Apple's feature to accurately identify and position indoor environments designed for the visually impaired with iOS 11 and released at the end of 2017.

Currently serving in many different cities around the world, the Loud Steps once again demonstrated how ambitious it is in the global market with its project in the NFB. The Loud Steps application was awarded first prize in the "Best Use of Mobile for Accessibility and Inclusion" category at the GLOMO Awards held under the Mobile World Congress (MWC).