Vodafone longtime CEO to step down as company returns to profit 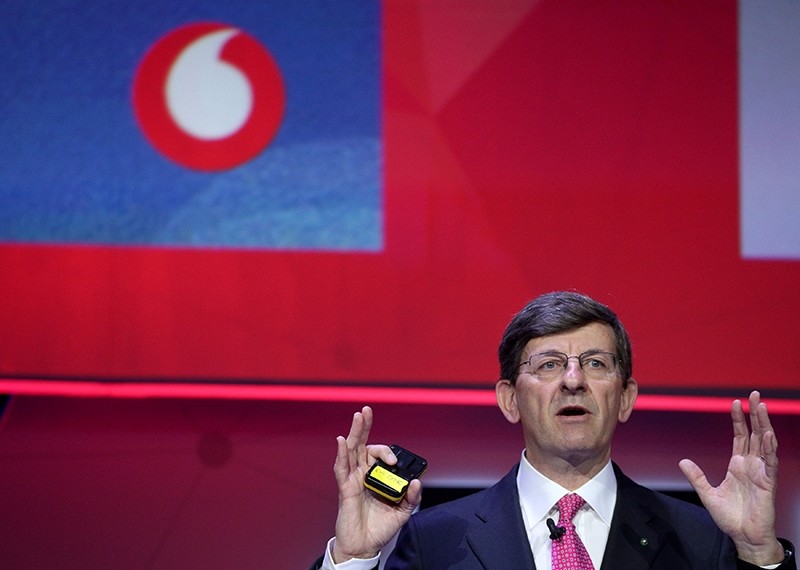 Vodafone Chief Executive Vittorio Colao delivers a keynote at the Mobile World Congress in Barcelona, Spain, Feb. 26, 2018. (Reuters Photo)
by Compiled from Wire Services
May 15, 2018 12:00 am

British telecoms giant Vodafone on Tuesday announced a return to annual profit, as it revealed that long-serving chief executive Vittorio Colao will step down later this year.

Vodafone, which also announced its full-year results, said CEO Vittorio Colao, who spent 10 years reshaping the group into a digital communications powerhouse would be replaced by its current finance director Nick Read.

The announcement comes less than a week after Vodafone unveiled a deal to turn it into Europe's largest cable and broadband operator by buying assets from U.S. peer Liberty Global.

"While the succession news may have caught the markets off-guard, it appears to be an orderly change within the group," Accendo Markets analyst Artjom Hatsaturjants said as Vodafone's share price dropped 2.6 percent in London morning deals.

Vodafone on Tuesday posted net profit of 2.4 billion euros ($2.9 billion) in the 12 months to the end of March, which compared with a loss after tax of 6.3 billion euros in 2016/17, the group said in a statement.

A slight drop in revenue to 46.57 billion euros was offset by lower costs compared with one year earlier.

The turnaround pointed to a "year of significant operational and strategic achievement and strong financial performance," Colao said.

Vodafone -- the world's second-biggest mobile phone operator by subscribers after China Mobile -- last week announced a deal worth 18.4 billion euros for some of Liberty's European assets.

The deal will see Vodafone become the second biggest player in eurozone powerhouse Germany, while it will acquire Liberty operations also in the Czech Republic, Hungary and Romania.

Vodafone said it was close to gaining regulatory approval for the planned merger of its Indian operations with Idea Cellular.

By creating India's largest telecoms operator, Vodafone is seeking to reverse its troubled fortunes in the country, where the company's revenue slumped 18.7 percent during its last financial year.

"It is game on for Vodafone, as its ability to react to a challenging environment whilst positioning itself for the future begins to reap rewards," noted Richard Hunter, head of markets at Interactive Investor.

Announcing Colao's departure, Vodafone said that during his decade at the helm, group-wide mobile phone customers had doubled to 536 million across 25 countries.