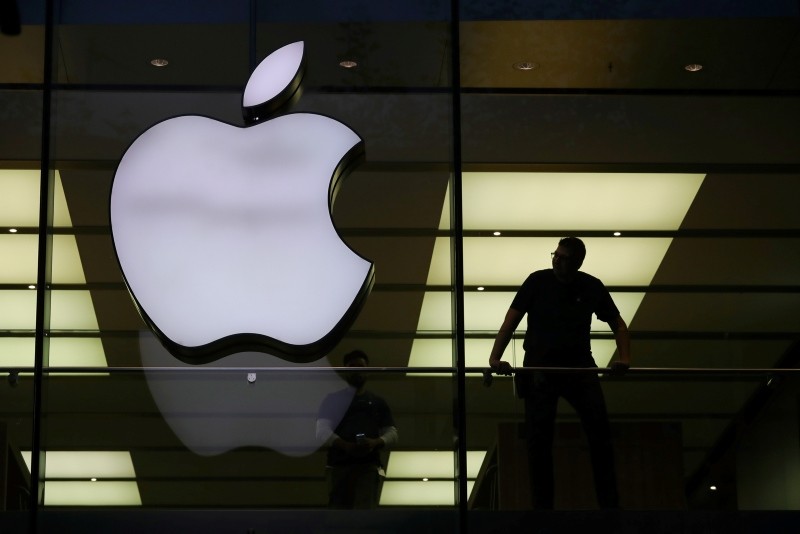 A silhouette next to an Apple during the sale start of the new iPhone X at the Apple store Grosse Bockenheimer Strasse in Frankfurt, Germany, October 3, 2017. (EPA Photo)
by Aug 01, 2018 12:00 am

Apple Inc on Tuesday posted quarterly results that topped Wall Street targets and forecast revenue in the current quarter above expectations, driven by sales of higher-priced iPhones and revenue from services like the App Store, Apple Music and iCloud.

Apple posted third-quarter revenue of $53.3 billion and profits of $2.34 per share, compared with analyst estimates of $52.3 billion and $2.18 per share, respectively, according to Thomson Reuters I/B/E/S.

The average iPhone selling price hit $724, beating analyst expectations of $694, according to data from FactSet. Apple Chief Financial Officer Luca Maestri told Reuters that the high selling prices were driven by sales of the company's costlier recent models, including the $999 iPhone X. Maestri said the iPhone X was the quarter's most popular model.

The world's most valuable technology company also forecast revenue of $60 billion to $62 billion for its fiscal fourth quarter, which will include early sales of soon-to-be-announced phone models, beating the $59.6 billion analysts expected, according to data from Thomson Reuters I/B/E/S.

As smartphone buying has plateaued, Apple has extended its iPhone line with both pricier and cheaper versions, from the iPhone X to the lowest priced $349 iPhone SE. It has also soothed investor concerns with a $100 billion stock buyback program and promises of growth from services such as streaming music and video, where Apple faces competition from rivals including Spotify Technology SA and Netflix Inc .

But several of Apple's services do not face strong rivals. Maestri told Reuters that sales from Apple Care, the company's warranty offering, were up 27 percent versus a year ago, though the company did not disclose a dollar figure for sales.

Apple was largely spared in last week's tech sector sell-off when shares of Facebook Inc, Twitter Inc and Netflix fell sharply on concerns about their future growth. With a market capitalization of $938.7 billion at market close on Monday, Apple is tickling at the title of world's first trillion-dollar company.

Apple's biggest selling products do not yet face duties stemming from the U.S.-China trade disputes, but President Donald Trump has threatened hundreds of billions of further tariffs whose product categories have not yet been enumerated.

But one of the categories potentially affected by tariffs is the Apple Watch, which is one of Apple's growth drivers. Maestri told Reuters that the company's so-called "wearables" business - which includes the Apple Watch and its AirPods headphones, among other items - has generated $10 billion in sales in the past 10 quarters and saw sales increase 60 percent in the most recent quarter. "We are not able to catch up to demand yet and continue to add capacity for the AirPods," Maestri said.

Apple's margins are facing pressure as it moves to put pricier components, such as OLED displays that show more vivid colors, into its products. The company said it expects gross margins of 38 percent to 38.5 percent in the fourth quarter, compared with analyst expectations of 38.3 percent, according to Thomson Reuters I/B/E/S. Analysts are also closely watching Apple's operating expenses, which have been increasing as its research and development costs outpace its revenue growth.

Apple said it expects operating expenses of $7.95 to $8.05 billion in the fourth quarter, compared with analyst estimates of $7.8 billion, according to Thomson Reuters I/B/E/S.