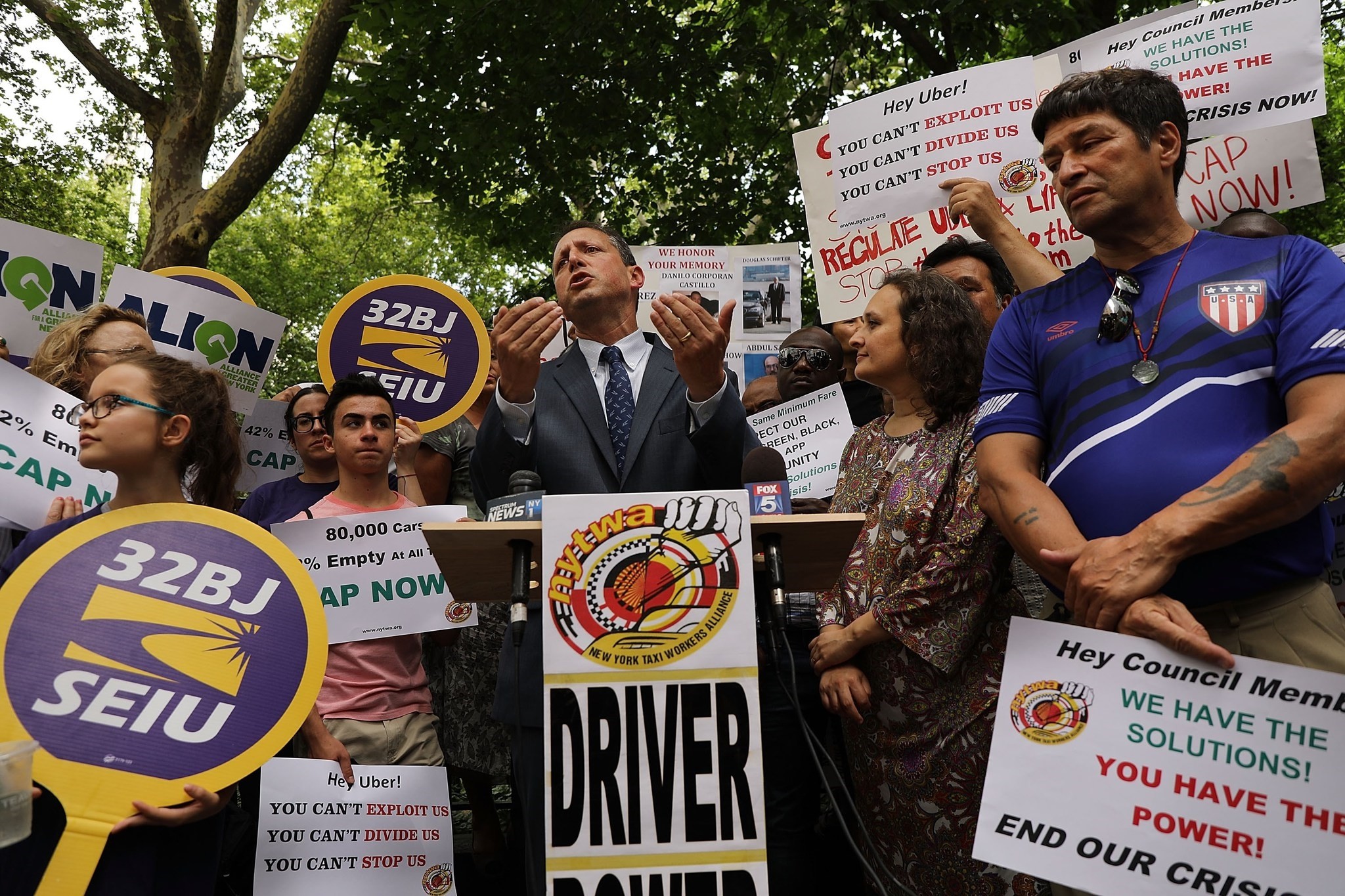 Councilman Brad Lander speaks at a rally in front of City Hall in support of a proposed city council vote on a 12-month cap of For Hire Vehicles in Manhattan on July 31.
by Aug 07, 2018 12:00 am

Taxi drivers around the world are worried about their livelihoods as Uber and other apps continue to grow. New York is the first U.S. city to make moves to legally cap the number of cars on the streets from ride-hailing apps in a vote due on Wednesday

The yellow cab driver swerves to the right and straight across two lanes of traffic to pick up the man who has appeared on the corner of Manhattan's 16th Street and 6th Avenue before driving swiftly away with him.

"It's very dangerous, but he's hungry," says taxi driver Richard Chow, as he observes the risky maneuver. Traditional yellow taxi drivers often have to make do with short trips - maybe a few dozen blocks uptown or downtown. If they're lucky, a customer will be going to another part of the city or the airport. On a very good day, they might get another customer for the way back. They are suffering and their main problem is competition from Uber, Lyft and other taxi app services that have flooded the streets of New York in recent years. Chow knows - his brother Kenny Chow, who had paid 700,000 dollars for his taxi license, disappeared on May 11 and was pulled out of the water beneath the Brooklyn Bridge two weeks later. It was the fifth suicide of a New York taxi driver in five months. A sixth committed suicide in June. In the past, many immigrants took New York's exam and registered themselves as drivers. A license was a privilege, says Nino Hervias, who came to New York from Peru in 1980.

"We weren't getting rich or richer, but we were okay," he remembers. After 30 years you could retire with dignity, Hervias says. A taxi in New York was the American dream on wheels. And taxis became part of the city's culture. Hailing a yellow cab was considered an iconic part of being in New York. Cabbies were more than just drivers - they were tour guides, therapists, philosophers or commentators on the political climate. But the golden age of yellow taxis is fading. Around 80,000 drivers are now working for Uber, Lyft, Juno and Via on New York's streets, compared to 13,500 regulated yellow cabs.

In July 2017, market leader Uber reported for the first time that it made more trips in a day than the taxi industry. A New York City taxi medallion, the essential license needed to operate a yellow cab, was worth up to 1.3 million dollars in 2013. That price has been dropping as Uber has grown. As part of a set of proposed laws, no new licenses for Uber and co will be issued for a year, in a bid to cool down the market. This would be the first regulation of its kind in a U.S. city. New York's City Council is due to vote on the proposals tomporrow. Some 75 million customers in more than 65 countries use the services of Uber, which started as a startup in San Francisco. Today it has 16,000 employees and three million drivers. Some countries have banned the service, in others it has been limited.

Uber is trying to mobilize support against the looming legal restrictions in New York, its most important U.S. market. A new ad shows people - primarily ethnic minorities - failing to hail a yellow taxi on the street and then climbing happily into an Uber.

"If the New York City Council gets its way, all of this could disappear," a voice says, as the app's screen shows the little Uber cars dropping off the map. What the taxi union NYTWA doesn't mention is that many drivers for Uber and similar services are living on the breadline too. In the US, Uber drivers earn an average of 11.77 dollars per hour, or 13 dollars in New York, according to the Economic Policy Institute. To put that into context, an average one-bedroom apartment in Manhattan or Brooklyn costs around 2,500 dollars. Newcomers often have false hopes, says Sohail Rana, who has been driving for Uber for almost five years and trains beginners at the IDG union to interact with customers.

"If you're a new driver, you will not survive," he says.