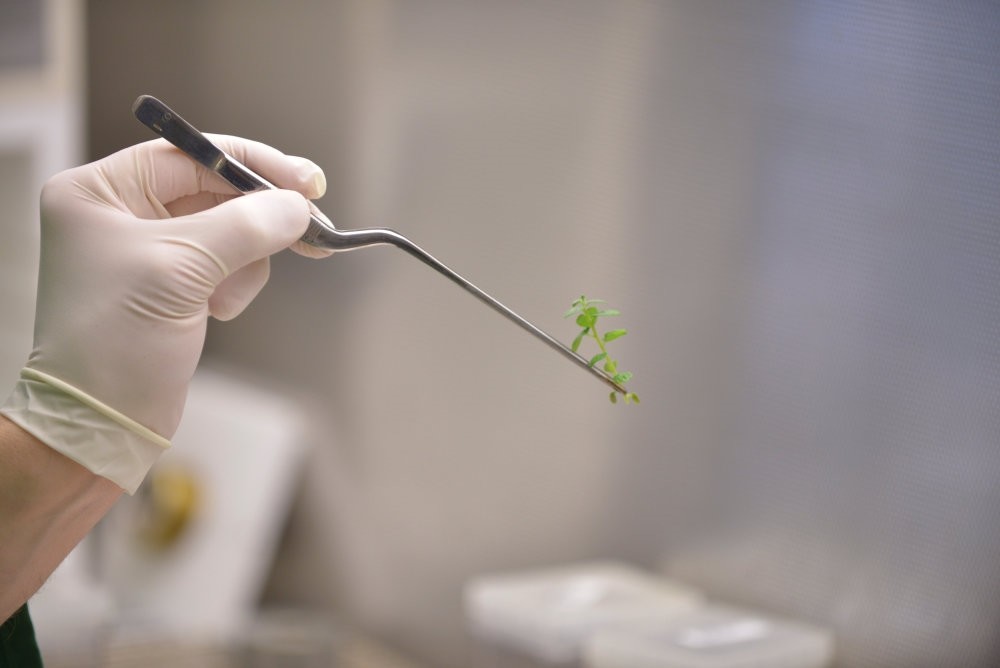 A research scientist examines a soybean plantlet in New Brighton, Minnesota.
by Aug 11, 2018 12:00 am

Seed development giants face a wider field of competition from start-ups that are advancing their own gene-edited projects. Biotech firms hope the technology can avoid the ‘Frankenfood' label

In a suburban Minneapolis laboratory, a tiny company that has never turned a profit is poised to beat the world's biggest agriculture firms to market with the next potential breakthrough in genetic engineering - a crop with "edited" DNA. Calyxt Inc, an eight-year-old firm co-founded by a genetics professor, altered the genes of a soybean plant to produce healthier oil using the cutting-edge editing technique rather than conventional genetic modification. Seventy-eight farmers planted those soybeans this spring across 17,000 acres in South Dakota and Minnesota, a crop expected to be the first gene-edited crop to sell commercially, beating out Fortune 500 companies. Seed development giants such as Monsanto, Syngenta AG and DowDuPont Inc have dominated genetically modified crop technology that emerged in the 1990s. But they face a wider field of competition from start-ups and other smaller competitors because gene-edited crops have drastically lower development costs and the U.S. Department of Agriculture (USDA) has decided not to regulate them. Relatively unknown firms including Calyxt, Cibus, and Benson Hill Biosystems are already advancing their own gene-edited projects in a race against Big Ag for dominance of the potentially transformational technology."It's a very exciting time for such a young company," said Calyxt CEO Federico Tripodi, who oversees 45 people. "The fact a company so small and nimble can accomplish those things has picked up interest in the industry." Gene-editing technology involves targeting specific genes in a single organism and disrupting those linked to undesirable characteristics or altering them to make a positive change. Traditional genetic modification, by contrast, involves transferring a gene from one kind of organism to another, a process that still does not have full consumer acceptance.

The USDA has fielded 23 inquiries about whether gene-edited crops need regulation and decided that none meet its criteria for oversight. That saves their developers years of time and untold amounts of money compared to traditional genetically modified crops. Of those 23 organisms, just three were being developed by major agriculture firms. Supporters of gene-editing say it allows a higher level of precision than traditional modification. Biotech firms hope the technology can avoid the "Frankenfood" label that critics have pinned on traditional genetically modified crops. But acceptance by regulators and the public globally remains uncertain. The Court of Justice of the European Union ruled on July 25 that gene-editing techniques are subject to regulations governing genetically modified crops. The ruling will limit gene-editing in Europe to research and make it illegal to grow commercial crops. The U.S. Food and Drug Administration, however, plans to regulate gene-editing in both plants and animals. Activists who have long opposed genetically modified crops remain suspicious of any sort of tinkering with DNA. The new technique raises risks of creating undesired changes in the food supply and warrants increased regulation, said Lucy Sharratt, coordinator of the Canadian Biotechnology Action Network.