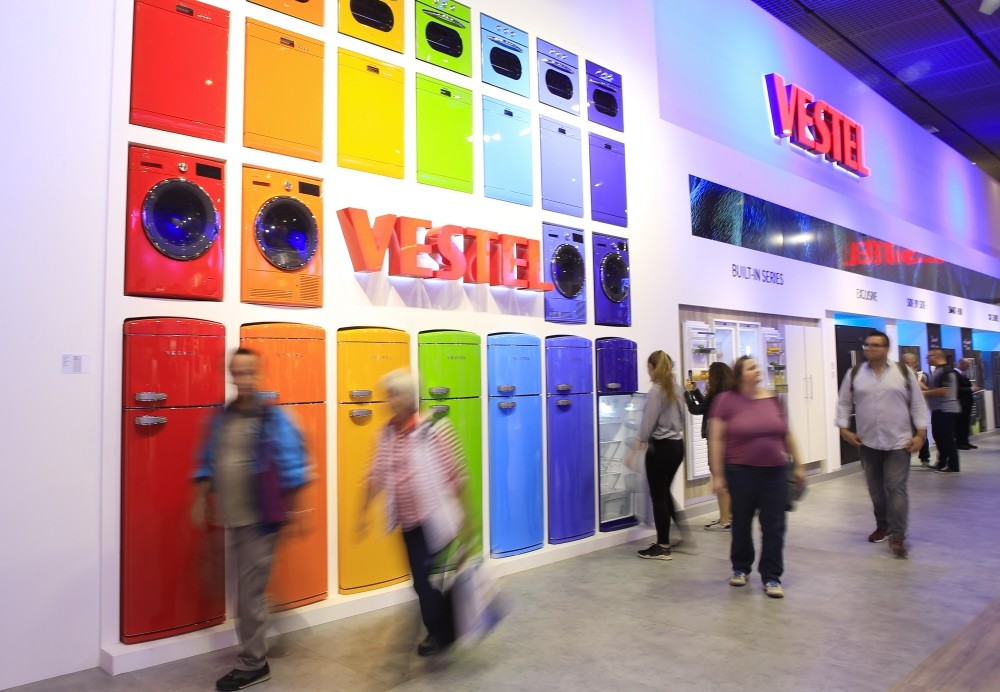 Smart technologies that make consumers' lives easier are being rolled out, with some brands making dishwashers that use artificial intelligence and washing machines that help extend fabric life

The days when engineers thought that the consumers would always share their agendas are now behind us. Technology fairs have now become events to introduce consumer-oriented products and services. This year's IFA Berlin, one of Europe's largest consumer electronics events, has shown that home appliance makers, like Turkey's Arçelik and Vestel, have come a long way. They have proved themselves in the global market with some innovative technologies – it is now possible to change channels with voice commands or as the house gets crowded, the appliances can increase the air circulation and even open windows. Vestel's dishwashers now use artificial intelligence (AI), while some of its washing machines eliminate the need to use detergents. They also produce smartphones that can easily trump any major phone makers.

For example, with innovative technologies in washing machines, engineers previously preferred to get laundry done in a more efficient manner by allowing the drum of the machine to rotate faster and quieter. But this was not what aunt Ayşe wanted, one of the customers Arçelik listened to at the customer-focused innovation center, Garage. She asked the company to rotate the drumless frequently and thereby wash clothes faster. Listening to this demand, Arçelik developed a technology called AquaTech, which can be extended the lifespan of fabric by up to 30 percent.

Let's save the dresses

Explaining this change, Oğuzhan Öztürk, executive vice president of Arçelik Production and Technology, said: "I am an engineer. We engineers learned that the customers' expectations were different by listening to them, while we previously focused on saving water, rotating faster and washing faster." Pointing out that consumers prefer washing machines with the greatest amount of time-saving and washing their fabrics with good performance without wearing them out, Öztürk noted that they experienced a wonderful example of consumer-focused innovation at Arçelik Garage. "At this point, we developed AquaTech, which offers a quick and precise wash in the light of the consumer's demands. This technology can cut the washing time by 50 percent, while also ensuring the most delicate cleaning of the laundry," he added.

In other words, the engineers are aiming to protect aunt Ayşe's handmade fabric. For this reason, they learned to use the power of the water and the pressure of the network. This technology allows the water to meet the detergent as soon as possible.

Vestel also fulfilled her desire to cut down on detergent consumption. A latest Vestel dishwasher can wash without using any detergent. This new and innovative dishwasher uses electrolysis technology and is a candidate for a new washing standard in its segment. Hydro Charge technology offers both eco-friendly and economical washing options. Vestel BrilliART Dishwasher is equipped with 13 sensors allowing top level detection, setting the washing cycle in accordance with the level of dirtiness, protecting itself from voltage fluctuations, and compensating for waterline fluctuations. Another feature of the machine is the one-button operation on the front display. The acrylic door design without a handle also makes BrilliART stand out.

The signature of a master chef

Consumers can now have small home appliances that are extremely durable and robust, like the ones master chefs use. Arçelik's Grundig brand of small household appliances will carry famous Chef Massimo Bottura's signature next year.

Bottura said he uses Italian brands before but this was the first time he has put his own signature on a Grundig product. "I do not follow trends. I create them," Bottura says, without shying away from using expressions that show that he is the Steve Jobs of the kitchen.

There are five products in the matte black series which are produced in limited quantity bearing Bottura's signature, namely the kitchen mixer, toaster, coffee machine, power blender and hand blender.

Describing how they develop the products, Bottura said, "I use products I want and like to use. I have been working with the Grundig brand for a long time to perfect its products. I pay attention to the simple, robust, powerful and easy handling of the products. My Maserati car and my clothes are also black. So, I preferred black." An Italian Professor I met at MIT in Boston earlier used the term "making an impact in society" as a success criterion. Bottura is also undertaking works that will have a social impact when doing his job with passion. The series was prepared by Bottura, who also founded the "Food for Soul" initiative against food waste, with the slogan: "Cooking is an act of love."

"The kitchen has a special place in my heart. It is not just a need, but it also means love, creativity and memories. I grew up in Modena. I used to hide under the kitchen table while my grandmother was making tortellini when I was a child. As the flour poured out around me, I used to watch out for a moment when my grandmother was not looking and swallow the tortellini from the table without her seeing it," Bottura said. "One of the most important lessons I learned from my grandmother is to respect food and not waste anything. I hope that this special series, which I am delighted to prepare with Grundig, will inspire you to reduce waste and increase creativity while cooking at home. Cooking is not a job but an act of love," he said.

Stating that they are no different from global giants in smartphones, Vestel Group Chairman Turan Erdoğan said that they are excited about President Erdoğan's support for the Vestel Venus phones.

"We are working with global giants to make smartphones an export product. In terms of quality, we have no difference from world giants. You cannot understand by looking at the parts on the phone. All of the world's giant brands are buying parts from each other," Erdoğan noted. "We are still in the beginner's phase. But we have shown that we are serious about this. In order to create depth, there must be experienced companies in the field of supplier industry, just like in automotive or home electronics."

In the past weeks, Türk Telekom announced cooperation on the Vestel Venus series phones. The Z30 is the latest product of the series introduced at IFA 2018. The Z30's notched 6.18-inch screen is the product of the large screen, small frame concept launched with the iPhone and followed by other smartphone brands. The curved 2.5D glass on the touch screen and the curved 3D glass on the backside, which surrounds the metal body on both sides, make ergonomic grip comfortable without dropping the phone. The Z30 has a high memory capacity (64 GB) that allows users to carry photos, videos and songs. Moreover, this capacity can be increased with a tiny microSD card. Featuring a 2.5 GHz 8-core MediaTek processor and 4 GB RAM, the Z30's rear dual cam features Phase Sensing Auto Focus. So, the phase of taking blurry pictures comes to an end. However, it is possible to use the portrait photo option to blur the background and give the feeling of a professional photo. The 16 MP front camera allows selfies to always look great. The Z30 also features Face Unlock, which removes the keylock feature to activate the phone.

Samsung has gained loyal users with its Notebook series for the last seven years. Moreover, a significant portion of these users did not give up on Samsung despite the Note 7 crisis. We now have experienced a long journey with the new Galaxy Note 9. The Note 9, which we thought would not cause worry with its battery, did not mislead us. Although let me warn you about open applications; they do effect battery performance.

Watching videos on a 6.4-inch screen and looking at photos is another pleasure of the Note 9. The internet speed and capabilities are also very good. The phone has no problems with gaming and graphics performance. I also do not have to look for the home key any more.

The camera shoots beautifully in low light and even in video shooting mode it affected minimally. The S Pen is simple but very practical to use as a smart remote control. It is a great tool for presentations and selfie photo shoots.

What I dislike in the Note 9

The phone is tough to grip and you constantly drop it, so never use the phone without a case. Not getting rid of Bixby, which does not have support Turkish. It causes unfair prejudice without experiencing this service. Samsung is insisting on pushing Bixby. The virtual key and the home key are too close together. So sometimes when writing, the application is accidentally closed.

The long-awaited Google Pixel 3 is expected to be released on Oct. 9. The Pixel 2, which stood out with the camera algorithm, carries the same for the Pixel 3. Chinese company Huawei will introduce the Mate 11 in the second half of October. The Leica lenses will once again point to the height of digital photography the phone allows users.