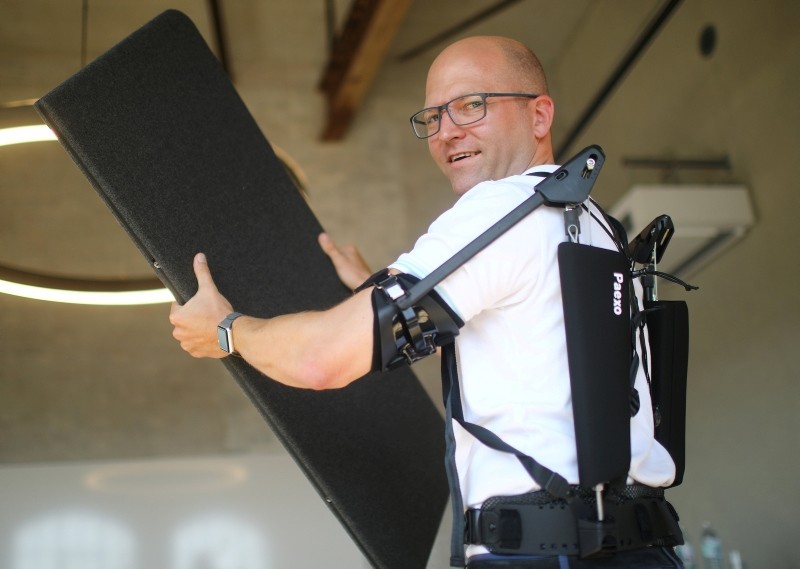 Soenke Rossing, Head of Industrials unit at German prosthetic limb maker Ottobock, presents an exoskeleton of the company during an interview with Reuters in Berlin, Germany, August 23, 2018. (Reuters)
by Sep 11, 2018 12:00 am

The 99-year-old firm, which started out making prosthetics for World War One veterans, is seeking to tap new growth opportunities ahead of a possible stock market listing.

The family-owned company has tested the 'Paexo', a wearable upper-body exoskeleton designed to ease the physical strain of repetitive overhead assembly work, on 30 workers at a Volkswagen plant in Bratislava.

After 80 percent of workers said they would recommend it to colleagues, Ottobock is talking to Volkswagen about using the Paexo in series production, said Soenke Roessing, head of Ottobock's Industrials unit.

VW said it was in final consultations about rolling out the exoskeleton in series production.

Exoskeletons were developed for medical and military use. But as workers age, sales of exoskeletons for industry are forecast to rise to $1.76 billion in 2028 from $67.29 million this year, according Rian Whitton, an analyst at technology market intelligence firm ABI Research.

This corresponds to more than 126,000 units in 2028, against around 3,900 this year, as companies seek to make workers more productive and protect them from injury.

Ottobock plans to launch the Paexo on Thursday. Beyond the automotive sector, it is targeting the aerospace, shipping and construction industries as well as tradespeople, and is running pilots at over 20 sites in Europe, Roessing said.

Since then, Ottobock, which had sales of 927.4 million euros ($1.08 billion) in 2017, has revamped its management with Naeder appointing Oliver Scheel as CEO, the first non-family member to run the company.

Ottobock began by developing exoskeletons to help people with partial paralysis or spinal injury walk again. Its move into industry is part of a broader bet on bionics - using mechanics to augment human strength.

It will not be alone. A host of new start-ups, including Dutch firm Laevo and California's SuitX, are racing more established players in the defense and engineering space, such as Lockheed Martin and Panasonic.

Ottobock's closest competitor, Iceland's Ossur, has teamed up with Fiat Chrysler's robotics specialist Comau and plans to launch an upper-body exoskeleton in December.

Other car companies are testing the technology too.

Audi is rolling out a "Chairless Chair" exoskeleton made by Swiss start-up Noonee that allows workers to sit instead of standing at its Ingolstadt factory.

It has also tested upper-body exoskeletons from Laevo and is planning a comparative study with Ottobock's Paexo and Levitate's Airframe later this year.

Patrick Schwarzkopf, managing director of the VDMA Robotics + Automation Association, said the scramble to develop exoskeletons underscored a trend towards closer interaction between humans and machines in factories.

"An exoskeleton is probably the most intense form of human-robot collaboration. In a way, your arm becomes a robot arm because it has reinforced strength," he said.

Schwarzkopf sees exoskeletons competing with inexpensive collaborative robots, or "cobots", which can work alongside humans, for example placing a tire on a vehicle while leaving the worker to screw it into place.

A cobot can cost as little as $10,000, although they typically cost two to three times that. Ottobock's Paexo is priced at 5,000 euros.

The Paexo is a 'passive' exoskeleton that works by transferring the weight of the raised arms to the hips through a mechanical cable technology that takes the stress off a worker's shoulders.

The backpack weighs 1.9 kilograms and gives the user's arms a feeling of weightlessness akin to floating in a swimming pool.

Roessing said the Paexo was the lightest of its kind and can be worn for eight-hour shifts, allowing workers to hold heavy tools or screw in parts overhead without strain. To make his point, he wore the Paexo throughout an interview with Reuters.

Juergen Klippert, an expert on the future of work at the IG Metall union, said exoskeletons ostensibly provided relief. But it was unclear whether a worker's joints would be burdened by holding heavy tools for prolonged periods.

Ottobock plans to make its exoskeletons "intelligent" by adding sensors to help workers correct their posture and tell them what part to place where in the assembly process. Prototypes to support the back and hand are also in development.

After colleagues kept asking to borrow the 'Paexo' for the weekend to do home renovations, Roessing now wants to launch a simplified version for the price of a good power tool.