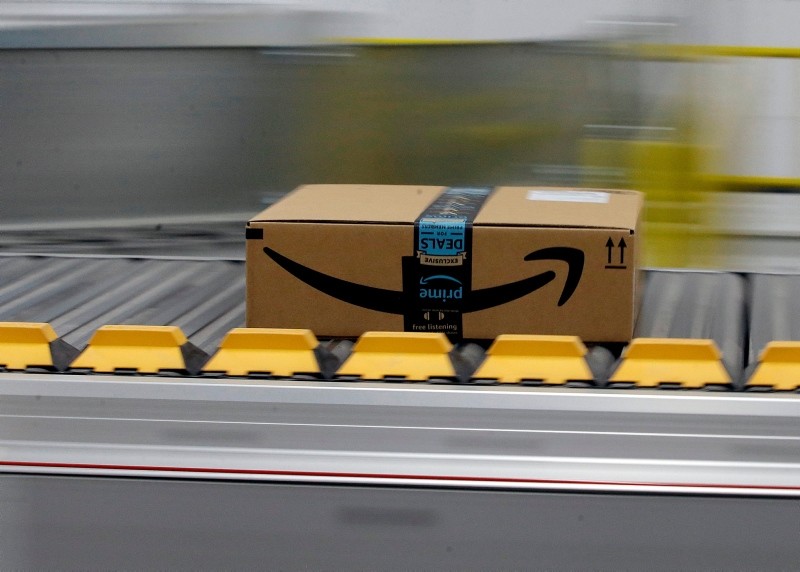 In this Feb. 9, 2018, file photo, a box for an Amazon prime customer moves through the new Amazon Fulfillment Center in Sacramento, Calif. (AP Photo)
by Daily Sabah with Agencies Sep 19, 2018 12:00 am

Amazon.com Inc. said Wednesday it had launched activities in Turkey, offering products across 15 categories to customers across the country.

"We are committed to building our business in Turkey in the coming months by expanding our selection and delivery options," Sam Nicols, country manager for Amazon.com.tr said in a written statement.

"Starting today, customers across Turkey can visit www.amazon.com.tr to shop from a selection of millions of products, with the benefit of everyday low prices and reliable free delivery for orders above 50 Turkish liras," the statement added.

The company noted that it is offering a wide variety of products from local Turkish brands as well as big brand favorites.

"Amazon.com.tr features a vast selection of products across 15 categories, such as books, consumer electronics, sports, outdoor, tools, toys, home improvement, and baby, including products from over 1,000 local Turkish businesses," it said.

Nicols said that the company's mission is to be world's most customer-centric company, where customers can find and discover anything they might want to buy online, at great prices.

"Since the launch of Amazon.com in 1995, hundreds of thousands of Amazon customers in Turkey have ordered millions of items from existing Amazon stores around the globe," Nicols said.

Alpagut Çilingir, head of Amazon seller services for Amazon.com.tr, said: "E-commerce has the power to level the playing field between big and small businesses, empowering Turkish companies of any size to grow their business online."

"We are investing in helping sellers become successful-continually building tools that do the heavy lifting to help them to sell more," Çilingir said.

Amazon Turkey offered discounts in certain products on its first day, pledging "easier and faster delivery" for buyers in Turkey, which has a population of about 80 million.

The U.S. behemoth may however face stiff competition from already established local competitors such as online retailer Hepsiburada and GittiGidiyor, an eBay subsidiary.

In August 2016, it was reported that the U.S.-based e-commerce giant would enter the Turkish market and establish an office in Istanbul.

The controlling shareholder of the company is the Luxembourg-based Amazon Europe Core S.à r.l., which means the office will be dependent on its European affiliate.

The Turkish e-retail market was worth 42.2 billion Turkish liras (6.72 billion dollars) in 2017, a 37-percent increase over the preceding year, according to local information technology union TÜBISAD.

President Recep Tayyip Erdoğan is set to meet more than 30 U.S. business managers from sectors such as information technology and food in Ankara later Wednesday to discuss future investments in Turkey.

Jeff Bezos -- currently the richest man in the world -- founded Amazon in 1994 as an online bookstore, and made it the biggest Internet retailer in the world in revenue and market value in 24 years.

Amazon is the second largest private employer in the U.S. with 541,900 employees.

On Sept. 4, Amazon.com Inc. briefly joined Apple Inc. to become the second $1 trillion publicly listed U.S. company after its stock price more than doubled in a year as it grew rapidly in retail and cloud computing.