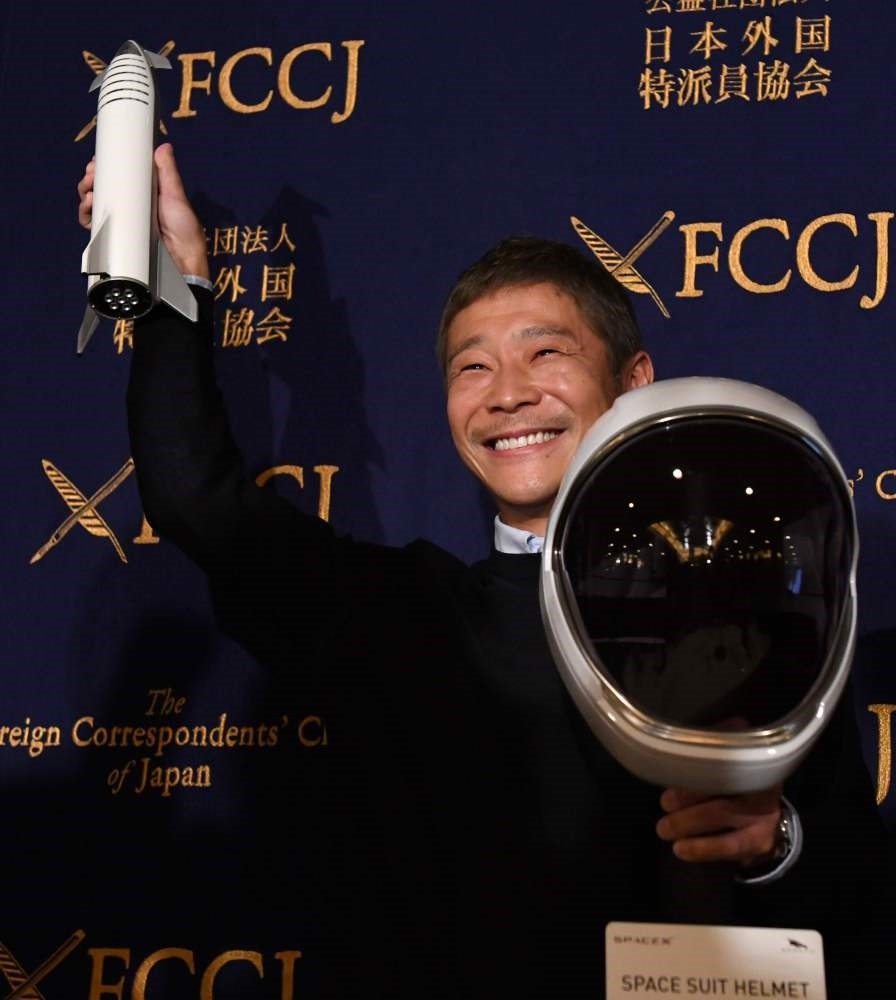 Yusaku Maezawa, entrepreneur and CEO of ZOZOTOWN and SpaceX BFR's first private passenger, poses with a miniature rocket and a space helmet prior to the start of a press conference at the Foreign Correspondents' Club of Japan in Tokyo on Oct. 9.
by French Press Agency - AFP
Oct 10, 2018 12:00 am

Billionaire Japanese tycoon and future space tourist Yusaku Maezawa's training to go the moon should not be too tricky, he joked yesterday, adding that he planned to use free time from his six-hour work day to squeeze it in. The 42-year-old Maezawa paid an undisclosed sum for a ticket on fellow tycoon Elon Musk's SpaceX rocket around the moon as early as 2023 and the passionate art collector also plans to take around half a dozen artists with him on the trip.

"It hasn't been decided yet what training I will need to undergo but Elon Musk has said it shouldn't be too hard," Maezawa jested, adding in Japanese, "I believe English will be a must."

Asked how he could fit astronaut training around his already hectic schedule, he said he adhered to his own company policy of working a six-hour day and devoting the rest of the time to personal projects.

"I don't go to work from morning to night. I'm there three or four times a week and I try to go home after six hours," Maezawa told a packed news conference in Tokyo.

Maezawa will hitch a ride aboard Musk's Big Falcon Rocket (BFR), which SpaceX has acknowledged may not be ready for human flight for at least five years. First announced in 2016 and estimated to cost $5 billion, the BFR was touted as the most powerful rocket in history, even more potent than the Saturn V moon rocket that launched the Apollo missions five decades ago. Maezawa said he had received "safety guarantees" that allowed him to be able to invite the artists along on the trip, although he confirmed he had not yet begun negotiations with potential fellow-travelers. He said he was most looking forward to seeing the entire Earth from space.

"I look forward to getting close to the moon. I would like to see the Earth in full view... To see it with my own eyes, just thinking about it now makes tears well up in my own eyes," he said. Maezawa is chief executive of Japan's largest online fashion store and is the 13th richest person in Japan, with an estimated fortune of $2.8 billion, according to business magazine Forbes.