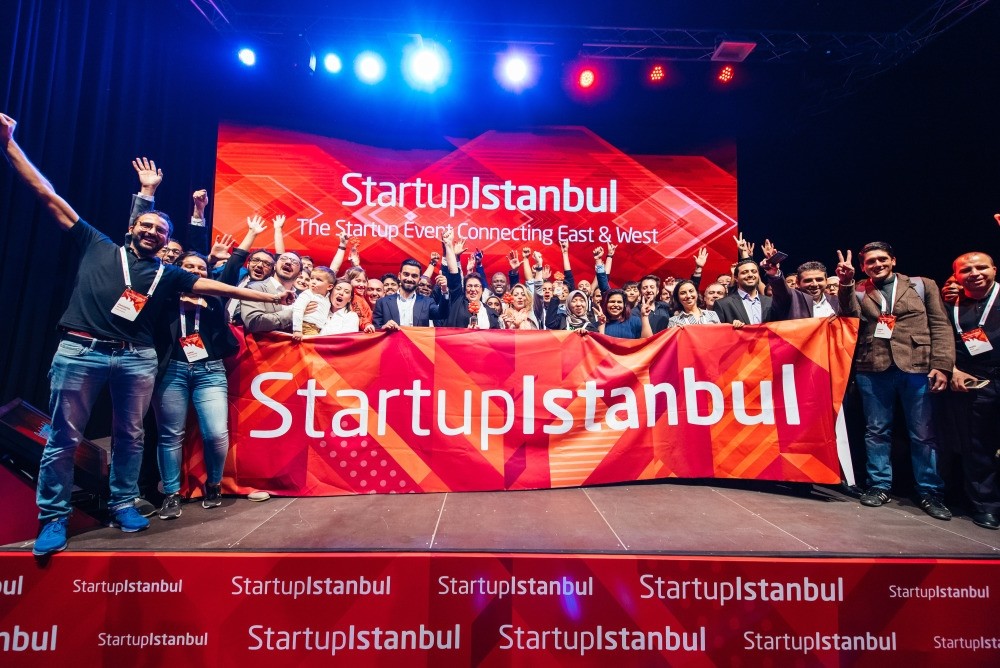 Etohum, selected as one of the 10 most famous accelerators in the world by Global Accelerator Report, made Istanbul the meeting point of entrepreneurs with ventures from dozens of countries.

One hundred startups were selected from 90,000 entrepreneurial applications for Startup Istanbul, sponsored by Istanbul Technical University's İTÜ ARI Teknokent and Esas Ventures, to make presentations to the world's leading investors and institutions.

The top three were then selected from 10 finalists. Third prize went to Iyris from Saudi Arabia, while second prize went to Neurafarm from Indonesia and the first to Friendbase from Sweden - all three run by female entrepreneurs, as women displayed confidence in their projects and their success in team management surpassed their competitors.

This hot meeting, which started four days ago, enabled entrepreneurs to create unique bridges with each other and investors. From a 15-year-old Jordanian entrepreneur to female entrepreneurs, everyone fought to take the stage in the final for two-and-a-half minute presentations. Ten ventures were selected as finalists, and 10 entrepreneurs made presentations to the jury: Esas Ventures Founding Partner Sabancı Kamışlı, DraperU Venture Partner Asra Nadeem, Techstars London Program Director Marko Srsan and Topia CPO Sten Tamkivi. After their presentations, entrepreneurs answered questions from the jury. The jury chose Friendbase, Neurafarm and Iyris as the top three ventures.

"We have had a goal and dream since the day we established Esas Ventures," Esas Ventures Founding Partner Fethi Sabancı Kamışlı said at the event. "Our goal was to integrate the Turkish entrepreneurial ecosystem with other ecosystems in the world, while our dream was to make Istanbul one of the most important startup centers in its region. We want to serve as a bridge between Istanbul and the rest of the world. The bridge is a two-pillared structure. If you only build one side, there will be no integration; thus, no bridge. Startup Istanbul is one of the most important players both in Turkey and in the region."

Noting that they are pleased and proud to be the main sponsor of Startup Istanbul as Esas Ventures, he continued, "At the Startup Istanbul Challenge, we listened to and shared the excitement of many valuable entrepreneurs from all over the world. It is also pleasing that women entrepreneurs marked this year's event. We will continue to support these and similar activities and startups that will contribute to the development of the entrepreneurial ecosystem."

Pollective, a digital research platform that brings brands and consumers together directly, provides a win-win service for both sides. Pollective, one of the sixth term ventures of Türk Telekom's entrepreneurial acceleration platform Pilot, offers brands the opportunity to fully reach consumers and get insight, while enabling customers to share their insights with brands and gain a return, in addition to learning what they are curious about.

Security, performance and cost come to the fore in the future cloud technology road map. The competition of giants, such as Microsoft, Oracle, IBM, Google and Amazon, forms the companies' story of digitalization.

While giants such as Microsoft, Google, IBM and Amazon compete for cloud technology, Oracle, a long-established company in the software industry, does not remain idle. Speaking at the opening of OpenWorld where thousands of business partners and developers participated, Oracle Chairman and CTO Larry Ellison shared his vision for the second-generation cloud. While first-generation clouds were built on a decade of technology, the Oracle Second Generation Cloud claims to have been specifically developed to help businesses run their workloads reliably. Oracle Cloud claims security, performance and cost savings.

Oracle Cloud Infrastructure, the basis of the Oracle Second Generation Cloud, is designed to run any type of enterprise workload safely. Oracle's modern and leasable infrastructure products offer exclusive support for the self-managing database, while delivering brand-new security levels from the center to the top to protect critical data.

Ellison stressed the situation was "not good enough," while talking at length about the current situation of cyber defense. To address this important issue, he introduced the Oracle Cloud Infrastructure's new security services, which are highly automated with detective and predictive features to help ward off dangers. Pointing to the unique security feature of the Oracle Cloud, Ellison showed how the Oracle Self-Managing Database performed a unique search for security hazards, while helping to prevent cyberattacks and data thefts on the one hand and implementing security updates on the other.

Extending Oracle's self-managing database features, Ellison also introduced new installation options, including the exclusive Exadata Cloud Infrastructure and the Cloud in Customer. Customers will now be able to install Custom Exadata Cloud Infrastructure to isolate workload to achieve greater security and reliability for workloads critical to missions under Self-Managing Databases, meaning that they will get a special solution for critical workloads.

Ellison also shared test results and short demos that highlighted the difference in performance between Oracle and Amazon, which he saw as their biggest rival. In these tests, the Oracle Self-Managing Database, was compared to Amazon's key products, for example the Oracle Database was compared to Amazon's Relational Database Service (RDS), Amazon Aurora and Amazon Redshift. In the case of direct comparisons, the difference between Amazon's 99.95 percent reliability and availability SLAs, which exclude many unplanned and planned idle time sources, and Oracle's 99.995 percent SLA guarantees were revealed, while putting forward presentations claiming that the Oracle Self-Managing Database continues to run uninterrupted during database updates.

As new ventures keep attracting investment, more are hoping for it. In particular, established communication networks have reached a moving solution in terms of technology ventures that start at the same spot but fail to broaden their business. Viell, a socially segregated social group with a wide range of distinguished members, such as new generation businesspeople, expats, professionals, artists, entrepreneurs and designers aged 21-55, completed its first investment tour with TL 1 million. Thus, Viell launched an online marketing platform for top segment brands that want to reach this special audience.

Some 1,228 people, including members of the board of directors and members of Turkey's largest holdings, attended the Viell platform, which attracted a great deal of attention shortly after its release. Some 7,456 people who wanted to communicate with these businesspeople downloaded the Viell application. Having attracted great interest, Viell drew the attention of investors and received TL 1 million in investment in the first round.

Viell, which provides a dynamic application experience by tailoring content and brands that can attract the attention of members thanks to the artificial intelligence feature in its software, offers special discounts and privileges to members from exclusive brands. Viell members can enjoy tailored experiences and activities, while expanding their social and business environment.

Enabling members to reach the right people immediately by creating a member search with detailed parameters such as university, company, title, as well as updated, quality news content in their areas of interest, such as lifestyle, business and design, the Viell app is now available on the App Store.