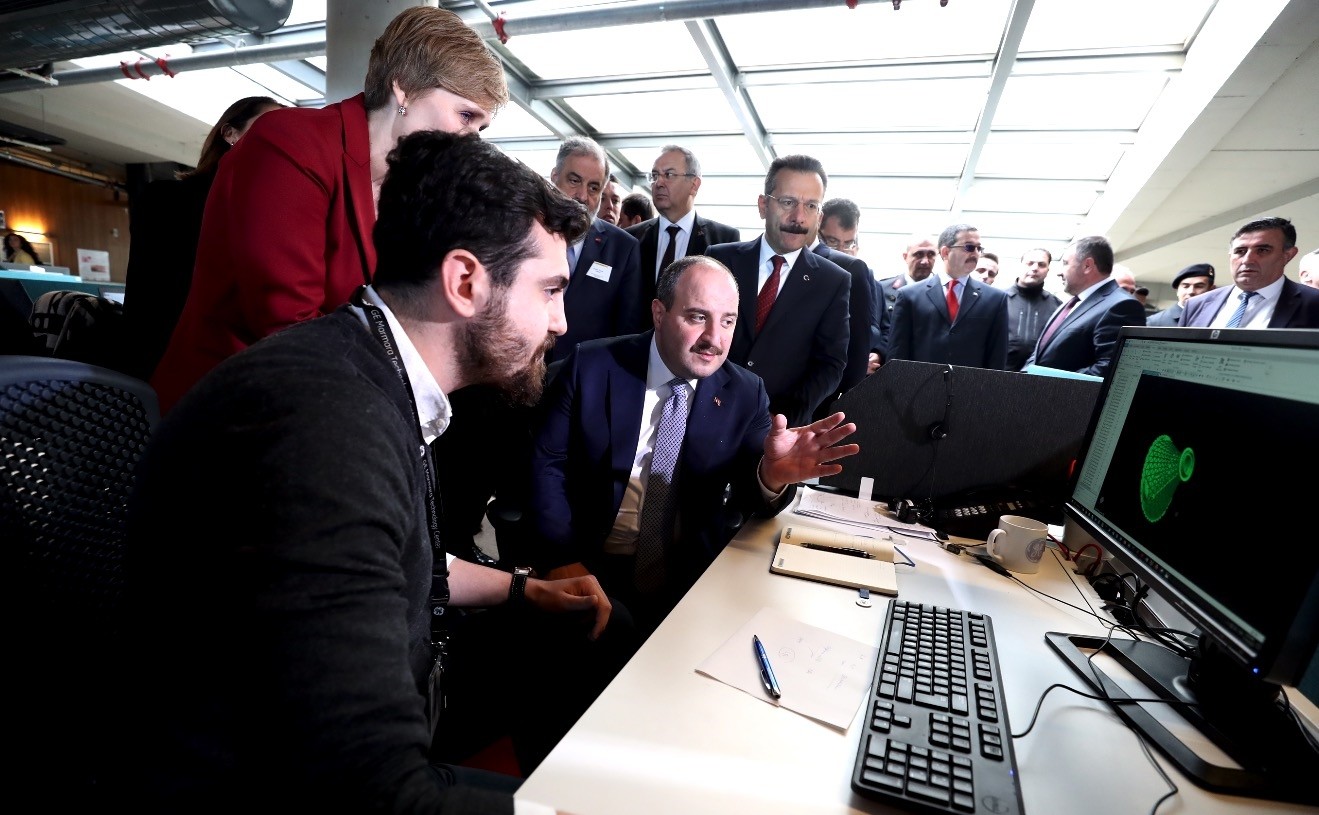 Industry and Technology Minister participated in the opening ceremony of General Electricu2019s new laboratory in the industrial district of Gebze which will design and development activities of aircraft engine components, Nov. 17.
by Daily Sabah Nov 19, 2018 12:00 am

General Electric has opened a new laboratory to expand its research and development operations in Turkey, develop the latest technologies to be primarily used in aviation and train talented engineers

General Electric (GE), the U.S.-based multinational conglomerate operating in the aviation, health care and renewable energy sectors among others, launched its new laboratory in Turkey's industrial district of Gebze located in the northern Marmara province of Kocaeli. GE Aviation aims to support technology development activities, train competent engineers and researchers and strengthen its solution-based partnership on additive manufacturing technologies at its new laboratory, one of three global laboratories the company has. More than 15 Turkish engineers working in the U.S., Germany, the Netherlands and Switzerland have returned to Turkey to be recruited at GE's new laboratory.

More than 15 Turkish engineers working in the U.S., Germany, the Netherlands and Switzerland have returned to Turkey to be recruited at GE's new laboratory. The U.S. giant has founded this latest laboratory in order to make a world-class contribution to the design and development activities of aircraft engine components in line with additive manufacturing technologies.

"In doing so, it is necessary to follow the present innovations very well, to realize our abilities and to make the best use of opportunities. Therefore, I think that the laboratory that we are opening will be an important opportunity to make Turkey one of the future technology centers," he added.

Another pleasing development, according to Varank, is that this facility is one of General Electric's three global laboratories.

In this laboratory where research and development (R&D) activities of both materials and different geometries will be conducted in the field of additive manufacturing, Varank said that designs of Turkish origin will be developed and these designs can be used in many different areas from aviation to automotive, from home appliances to energy and will serve directly to the priority of high value-added production.

He said that new technologies continue to be heavily involved in every aspect of life, and that new digital-based production models that work flexibly, quickly and efficiently are being developed with the intensive employment of additive manufacturing technologies.

"We are talking about a model that goes beyond traditional design and combines rapid prototyping, product optimization, functionality and low cost. By using this technology in the branches of industry that we are strong, we can carry our potential further. In areas where we are relatively weak, it is possible to create a new leap in this way," Minister Varank continued. "I believe that this laboratory established with our incentive system will create an important added value for our country. Within the scope of R&D Laboratory support program spearheaded by the Scientific and Technological Research Council of Turkey (TÜBİTAK), we attract the R&D capabilities of the world's leading companies to our country as it is here."

Stressing that four companies have so far benefited from the investment incentive schemes, Varank said while carrying out their innovative ideas, they also bring their know-how into the ecosystem.

Minister Varank stated that GE, which has been in Turkey for 70 years, is currently operating with 2,300 people, 500 of whom are R&D engineers, in five provinces, and realizing high value-added production and R&D activities in many areas such as aviation, health, energy and transportation.

Deputy Minister of Trade Gonca Işık Yılmaz Batur also stated that accelerating foreign direct investment and technology inflow to the country and encouraging export-oriented production is among the most important priority areas. She stressed that the laboratory that GE offered to the service of the country in TÜBİTAK Marmara Research Center (MAM) Technology Free Zone is among the most important elements supporting this goal. Batur informed that there are 1,989 companies operating in 18 free zones spread across the country, while 27 percent of them are operating with foreign capital.

"Along with our investor-friendly policies and programs implemented in cooperation with the Ministry of Industry and Technology, as well as all other relevant ministries together, we lend our support for this figure to increase in the future," she added.

Batur stated that exports from TÜBİTAK MAM Technology Free Zone reached $65 million in 2017. She recalled that in the first 10 months of this year, exports approached $50 million and that they expect this figure to catch up with the last year's figures and even exceed it. Batur said there are 23 companies in the region, conducting R&D-based operations with 700 of their employees active in the region, highlighting that GE also represents leading companies with a serious staff.

Molbay said that GE is proud to apply its knowledge and experience in this field to Turkey after the U.S. and Italy.

"More than 400 competent Turkish engineers are currently working at the GE Aviation Turkey Technology Center, where we have carried out advanced engineering and technology programs for the development of the aviation industry for over 18 years," Molbay noted. "Our total investment in the center has exceeded $15 million with this laboratory. In the GE Aviation Additive Manufacturing Technologies R&D Laboratory, where we will conduct technology development programs as part of a global team, we will make a world-class contribution to the design and development activities of aircraft engine components in line with the additive manufacturing technologies."