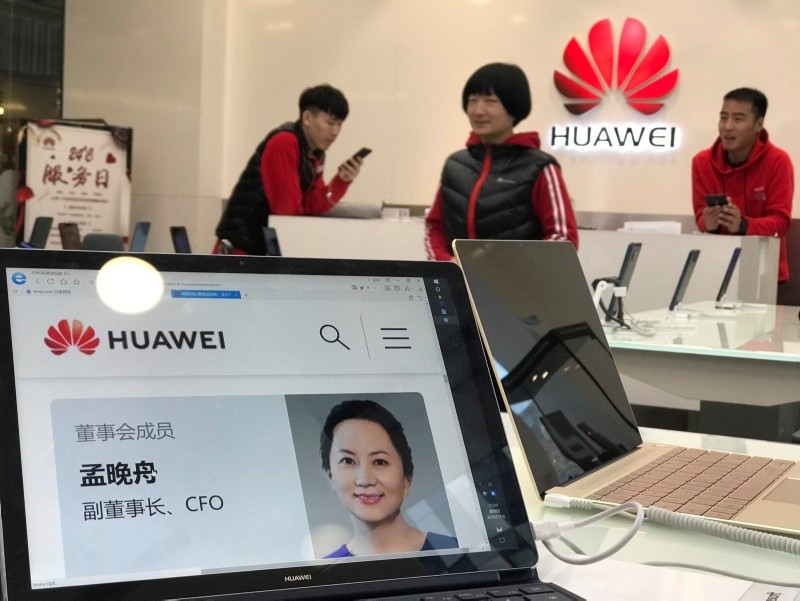 A profile of Huawei's chief financial officer Meng Wanzhou is displayed on a Huawei computer at a Huawei store in Beijing, China, Thursday, Dec. 6, 2018. (AP Photo)
by Compiled from Wire Services Dec 05, 2018 12:00 am

Canadian authorities said Wednesday that they have arrested the chief financial officer of China's Huawei Technologies for possible extradition to the United States.

China demanded her immediate release, and a former Canadian envoy to China warned the case might lead to retaliation by the Chinese against American and Canadian executives.

The arrest took place on the same day Trump met with Chinese President Xi Jinping to discuss the trade war after the close of the G-20 summit in Argentina. They agreed to a 90-day truce in an escalating trade war that is threatening world economic growth and has set global investors on edge.

Meng is a prominent member of Chinese society as deputy chairman of the board and the daughter of company founder Ren Zhengfei, a former Chinese People's Liberation Army engineer.

McLeod said a publication ban had been imposed in the case and he could not provide further details. The ban was sought by Meng, who has a bail hearing Friday, he said.

Huawei issued a statement saying Meng was changing flights in Canada when she was detained "on behalf of the United States of America" to face "unspecified charges" in New York.

"The company has been provided very little information regarding the charges and is not aware of any wrongdoing by Ms. Meng," the statement said.

Huawei said it complies with all laws and rules where it operates, including export controls and sanctions of the United Nations, the U.S. and European Union.

Chinese Foreign Ministry demanded Meng's release and asked Canada and the U.S. to clarify the reason behind her arrest.

"We have made solemn representations to Canada and the U.S., demanding that both parties immediately clarify the reasons for the detention, and immediately release the detainee to protect the person's legal rights," foreign ministry spokesman Geng Shuang told a regular press briefing.

The Chinese Embassy in Ottawa also said her human rights were violated and demanded she be freed.

"The Chinese side firmly opposes and strongly protests over such kind of actions which seriously harmed the human rights of the victim," the statement said.

Shares across Asia plunged Thursday, with Hong Kong and Shanghai-listed technology firms battered, after the arrest of Meng has fuelled fears about the recent China-US trade deal.

As Donald Trump and Xi Jinping's tariffs ceasefire last weekend -- which sparked a one-day rally -- fades to a distant memory, investors are back in selling mood as they fret over a range of issues including the state of the world economy, oil prices and Brexit.

Hong Kong-listed ZTE, which was subject to a U.S. banning order over security fears earlier this year before that was reduced to a massive fine, was eight percent down. Market heavyweight Tencent was 5.3 percent lower, while AAC Technologies and Sunny Optical -- a supplier to Huawei -- each plunged around six percent.

And in Shanghai, Wingtech Technology was down by its daily limit of 10 percent, while Raisecom Technology and Fujian Raynen Technology both dived more than four percent.

There were also losses for other tech firms in the region, with Sony down 2.7 percent in Tokyo and South Korea's Samsung more than two percent lower. The sector was already under pressure from concerns about future growth and following a surge in recent years.

"This headline is quite significant as the U.S. government is attempting to persuade allies to stop using Huawei equipment due to security fears," said Stephen Innes, head of Asia-Pacific trade at OANDA.

"Recall that over 100 Chinese companies traded limit down (last month) when news broke the U.S. urged allies to blacklist Huawei?"

Broader markets, which have also been hit by worries that the US economy is showing signs of slowing, were well down.

Hong Kong shed 2.7 percent while Shanghai closed down 1.7 percent and Tokyo slipped 1.9 percent. Taipei was 2.3 percent off, while Manila and Jakarta also dived.

The arrest "has just added another spanner in the works", Eleanor Creagh, strategist at Saxo Capital Markets, told Bloomberg TV.

"It's really illustrative of the fact that the trade truce... doesn't really do much to mend the underlying relationship between the U.S. and China that is still deteriorating."

The greenback was well down against the yen, which is a go-to unit in times of turmoil.

The pound is struggling as Britain lurches towards a no-deal Brexit with Prime Minister Theresa May facing defeat in her attempts to push through parliament a controversial agreement with the EU.

Oil prices extended losses ahead of the weekend's meeting of OPEC and non-OPEC production giants, with investors unsure about how much and for how long they plan to reduce output.

The commodity has come under selling pressure, having soared Monday and Tuesday, owing to uncertainty about the reduction plans while Trump has called on OPEC to lift output to keep prices low.

A foreign ministry spokeswoman, Hua Chunying, said then that China hoped the U.S. would refrain from taking actions that could further undermine investor confidence in the U.S. business environment and harm its domestic economy.

Trump has threatened to raise tariffs on Chinese goods in response to complaints that Beijing improperly pressures foreign companies to hand over technology. That is widely seen as part of a broader effort by Washington to respond to intensifying competition with Chinese technology industries that Trump says benefit from improper subsidies and market barriers. The escalating trade war is threatening world economic growth and has set global investors on edge.

"That's something we should be watching out for. It's a possibility. China's plays rough," Mulroney said. "It's a prominent member of their society and it's a company that really embodies China's quest for global recognition as a technology power."

Mulroney said Canada should be prepared for "sustained fury" from the Chinese and said it will be portrayed in China as Canada kowtowing to Trump. He also said the Iran allegations are very damaging to Huawei and said China will push back hard.

Wenran Jiang, a senior fellow at the Institute of Asian Research at the University of British Columbia, said the Chinese will read the arrest on the same day as the Trump meeting with the Chinese leader as a planned conspiracy to do damage

"She was in transit through Vancouver. That means the intelligence agencies in Canada and the U.S. were tracking her and planning to arrest her for some time," he said.

He foresees a crisis in relations between the three countries if she is extradited and said any talk of free trade agreement between Canada and China would be over.

U.S. Sen. Ben Sasse, a Republican member of the Senate Armed Services and Banking committees, said Huawei is an agent of China's communist party and applauded Canada for the arrest.

"Americans are grateful that our Canadian partners have arrested the Chief Financial Officer of a giant Chinese telecom company for breaking U.S. sanctions against Iran," he said.