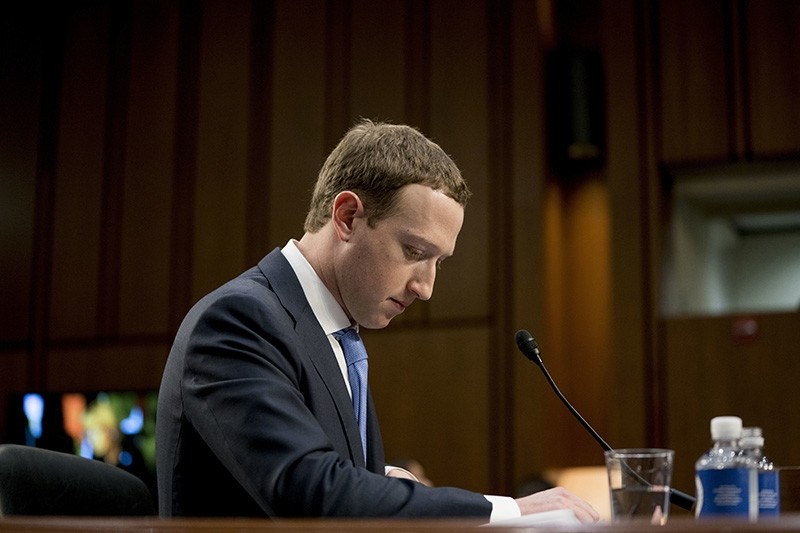 In this April 10, 2018, file photo Facebook CEO Mark Zuckerberg pauses while testifying before a joint hearing of the Commerce and Judiciary Committees on Capitol Hill in Washington. (AP Photo)
by Daily Sabah with AP Dec 05, 2018 12:00 am

A U.K. Parliament committee accused Facebook on Wednesday of cutting special deals with some advertisers to give them more access to data as it released 250 pages worth of documents on the tech giant's internal discussions about the value of users' personal information.

Parliament's media committee seized confidential Facebook documents from the developer of a now-defunct bikini photo searching app as part of its investigation into fake news. In a summary of key issues pertaining to the documents, the committee says Facebook "whitelisted" or gave preferential access to certain companies, such as Airbnb and Netflix, even after the tech giant announced changes in 2015 to end access to a user's "friends."

"Facebook have clearly entered into whitelisting agreements with certain companies, which meant that after the platform changes in 2014/15 they maintained full access to friends data," the committee said in a statement preceding the emails. "It is not clear that there was any user consent for this, nor how Facebook decided which companies should be whitelisted or not."

The parliament's Digital, Culture, Media and Sport Committee received the documents from app developer Six4Three, which had acquired the files dating from 2013-2014, as part of a U.S. lawsuit against the social media giant. The app developer is suing Facebook over a change to the social network's privacy policies in 2015 that led Six4Three to shut down its app, Pikinis, which let users find photos of their friends in bathing suits by searching their friends list.

The committee's seizure of the documents, which were under seal by a court in the United States, came after the CEO of Six4Three, Theodore Kramer, was threatened with arrest while on a business trip to London if he didn't hand over the material. The committee chair, Damian Collins, said the documents are relevant to his ongoing investigation into whether social media platforms were used to manipulate elections.

"(The documents) raise important questions about how Facebook treats users' data, their policies for working with app developers, and how they exercise their dominant position in the social media market," he said. "We don't feel we have had straight answers from Facebook on these important issues, which is why we are releasing the documents."

The cache includes emails from Facebook CEO Mark Zuckerberg and other key members of his staff. Collins said the emails raise important issues, particularly around the use of the data of Facebook users.

"The idea of linking access to friends' data to the financial value of the developers' relationship with Facebook is a recurring feature of the documents," Collins said.

The summary said the documents also show Facebook knew that a 2015 update to its Android mobile app phone system — which enabled the Facebook app to collect user call logs — would be controversial.

"To mitigate any bad PR, Facebook planned to make it as hard as possible for users to know that this was one of the underlying features of the upgrade of their app," the summary said.

Facebook responded quickly, saying the release was misleading without context and that the documents "are only part of the story."

In regard to the Android call logs, Facebook claimed the information gathered from users who allowed the app to access their call and text logs allowed it "to do things like make better suggestions for people to call in Messenger and rank contact lists in Messenger and Facebook Lite."

"We stand by the platform changes we made in 2015 to stop a person from sharing their friends' data with developers," the company said in a statement. "Like any business, we had many internal conversations about the various ways we could build a sustainable business model for our platform. But the facts are clear: we've never sold people's data."

"There's a big question on where we get the revenue from," Zuckerberg said in one email. "Do we make it easy for devs to use our payments/ad network but not require them? Do we require them? Do we just charge a rev share directly and let devs who use them get a credit against what they owe us? It's not at all clear to me here that we have a model that will actually make us the revenue we want at scale."

In another email from October 2012, Zuckerberg talked about a proposed revenue-generating model that would charge users for "reading" data, at a rate of about $0.10 per year.

Facebook responded by saying: "We explored multiple ways to build a sustainable business with developers who were building apps that were useful to people. But instead of requiring developers to buy advertising – the option discussed in these cherrypicked emails – we ultimately settled on a model where developers did not need to purchase advertising to access APIs and we continued to provide the developer platform for free."