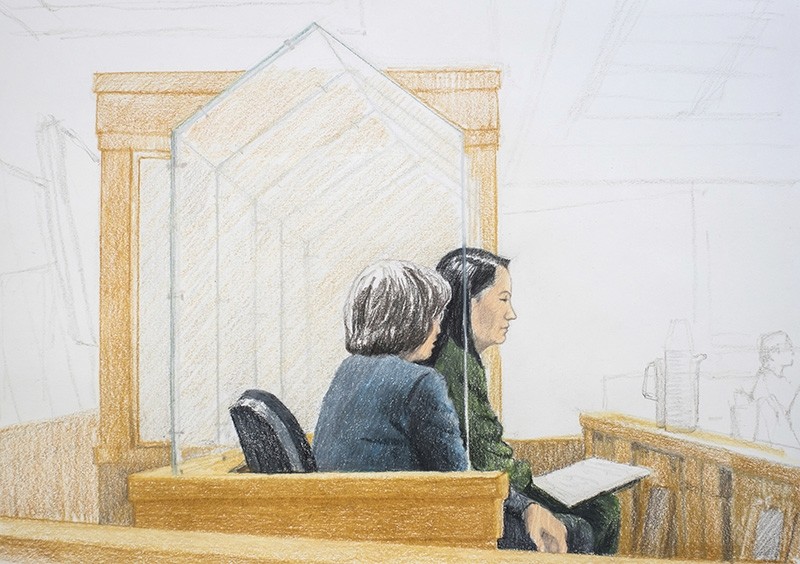 In this courtroom sketch, Meng Wanzhou, right, the chief financial officer of Huawei Technologies, sits beside a translator during a bail hearing at British Columbia Supreme Court in Vancouver, on Friday, Dec. 7, 2018. (The Canadian Press via AP)
by Compiled from Wire Services Dec 07, 2018 12:00 am

Chinese telecom giant Huawei's chief financial officer, arrested in Canada, faces U.S. fraud charges for allegedly lying to banks about the use of a covert subsidiary to sell to Iran in breach of sanctions, a bail hearing heard Friday.

Meng Wanzhou is accused of "conspiracy to defraud multiple financial institutions" and if convicted faces more than 30 years in prison, a Canadian government lawyer said, in asking the court to deny her bail request.

The lawyer said that Meng had personally denied to American bankers any direct connections between Huawei and SkyCom, when in fact "SkyCom is Huawei." SkyCom's alleged sanctions breaches occurred from 2009 to 2014.

According to Canadian court documents seen by Reuters, evidence shows SkyCom was "sold" in 2009 not to a purportedly unrelated entity but one also controlled by Huawei until at least 2014.

SkyCom bank acccounts were controlled by Huawei employees, who were the subsidiary's leaders in Iran, said the documents released during her bail hearing.

A New York court issued an arrest warrant for Meng on Aug. 22, asking she be detained to stand trial to face U.S. charges, the documents said.

The U.S. also alledges that Meng used at least seven different passports in the last 11 years.

He suggested that Meng has shown a pattern of avoiding the U.S. since becoming aware of the investigation into the matter, has no ties to Canada and has access to vast wealth and connections — and thus poses a flight risk.

Meng's lawyer said at the hearing that the fact that a person has extraordinary resources cannot be a factor that would exclude them from bail.

Attorney David Martin said at her bail hearing that her own dignity would not allow her to go against a court order. He also said Meng would not embarrass her father by breaching a court order.

Meng was arrested in Vancouver on Dec. 1 while transferring planes on a trip from Hong Kong to Mexico, at the request of U.S. authorities seeking her extradition.