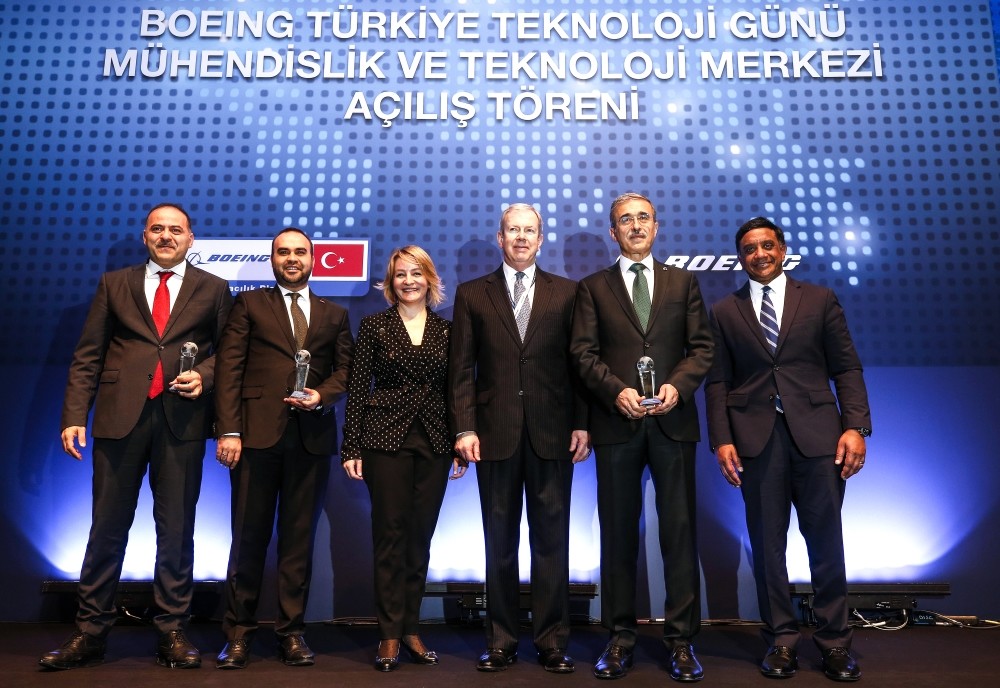 Established as part of the Boeing Turkey National Aerospace Initiative, aviation giant Boeing's new Engineering and Technology Center in Istanbul will focus on design engineering and research in aerospace

Having operated in Turkey for more than 70 years, the U.S. civil and military aircraft manufacturer Boeing yesterday opened its first Engineering and Technology Center in Turkey with a "Boeing Turkey Technology Day."

The new Engineering and Technology Center, located in Teknopark Istanbul, was opened yesterday with a ceremony held in Istanbul. The center will focus on design engineering and research to support Boeing's global technology development efforts. It will play an important role in enriching Turkey's aerospace ecosystem and connecting it to the global aerospace industry.

Mehmet Fatih Kacır, Transportation and Infrastructure Deputy Minister Ömer Fatih Sayan, Global Head of Boeing Research and Technology (BR&T) Naveed Hussain, many other Boeing officials as well asleaders from the aerospace industry, government and academia. The event discussed Boeing's ongoing and future technology partnerships in Turkey, as well as the future of aviation.

"In the center that we are opening today, engineering activities and technological research, especially on the development of interiors and composite technologies, will be carried out to give support to numerous programs run by Boeing. We will witness the transformation of these centers into the ones that will study intensively with hundreds of engineers in the future. I am sure that our well-educated and talented Turkish engineers will provide world-class service in this center. We see that our growing aviation sector, our universities and other scientific institutions have become a center of attraction beyond just providing services to the world," Demir said in his address.

Demir also noted that the Presidency of Defense Industries has also been carrying out pilot projects in the areas of developing platforms, the science of flight, material technologies, the design of mechanic systems and avionics.

"Moreover, we have also been conducting projects on aircraft, helicopters, engines, unmanned aerial vehicles and duty systems development. You will see that Turkey will start developing distinctive products of subsystems and engine systems and furthering the existing systems in the next years," he added.

Also addressing the opening ceremony, Naveed Hussain, global head of Boeing Research and Technology, said with the new Boeing Turkey Engineering and Technology Center, Boeing will leverage Turkey's engineering talent and expertise to improve some of the most advanced aerospace products in the world.

"This new center will contribute to Boeing's efforts to innovate, compete and win by providing solutions in key technological areas to make our products and services more capable for our customers. It also establishes a long-term framework so Boeing and its Turkish partners can advance their common goals for mutual success," he noted.

As for her part, Ayşem Sargın, Boeing Turkey managing director and country executive, emphasized that Turkey is one of Boeing's strategic growth countries and that the company sees great potential for the country to contribute more to the global aerospace industry as an industrial and technology partner.

"The Boeing Turkey Engineering and Technology Center is a testament to Boeing's commitment to Turkey. We are proud that this new center will develop technology for the global aerospace industry, adding to the existing capability in Turkey and bringing Turkey one step closer to its target of becoming a global player in aerospace. This is a major milestone under the technology acceleration component of the Boeing Turkey National Aerospace Initiative [NAI], which we launched jointly with the Presidency of Defense Industries last year. Choosing Istanbul as the location for our new engineering center demonstrates Boeing's long-term view on Turkey, and our commitment to support development of an innovative, world-class, competitive aerospace ecosystem in Turkey. We are committed to grow in Turkey, together with Turkey," she said.

The Boeing Turkey Engineering and Technology Center will leverage a talented pool of local engineers, focusing on high value-added technologies. The center will start its activities with research, engineering and design work for Boeing's new generation commercial airplanes, expanding to other key technology areas moving forward.

Boeing is the world's largest aerospace company and has had a long-standing relation with Turkey for more than 70 years. Suppliers in Turkey have been providing aero-structures and assemblies for all Boeing Commercial Airplanes programs. The value of Boeing's work placement in Turkey over the years has exceeded $1.8 billion and its programs currently support 5,000 highly skilled jobs in Turkey, an increase of 90 percent in five years.

The aviation giant works with a broad network of suppliers on several programs in Turkey. Turkish Aerospace Industries (TAI) is one of its 20 long-time suppliers network spread across Ankara, Istanbul, İzmir, Bursa, Kayseri and Eskişehir. Furthermore, Boeing and Turkish Kale Aero have participated in all Boeing commercial plan programs since 1997.

Meanwhile, local PFW supplies parts for the 787 program and Turkish Technic, a subsidiary of the national flag carrier Turkish Airlines (THY), and provides technical and maintenance service for several Boeing commercial aircraft models. As part of the Peace Eagle Project, Boeing also cooperates with ASELSAN, SELEX, THY and HAVELSAN, Turkey's defense software and systems company.

In 2017, Boeing launched a company-to-country initiative with its stakeholders in Turkey, called the "Boeing Turkey National Aerospace Initiative (NAI)." The NAI was developed as a strategic partnership program, which identifies mutually beneficial areas for collaboration between Boeing and Turkey. The NAI identifies four key areas of collaboration: Industry Development, Technology Acceleration, Services Collaboration and Advanced Skilling.