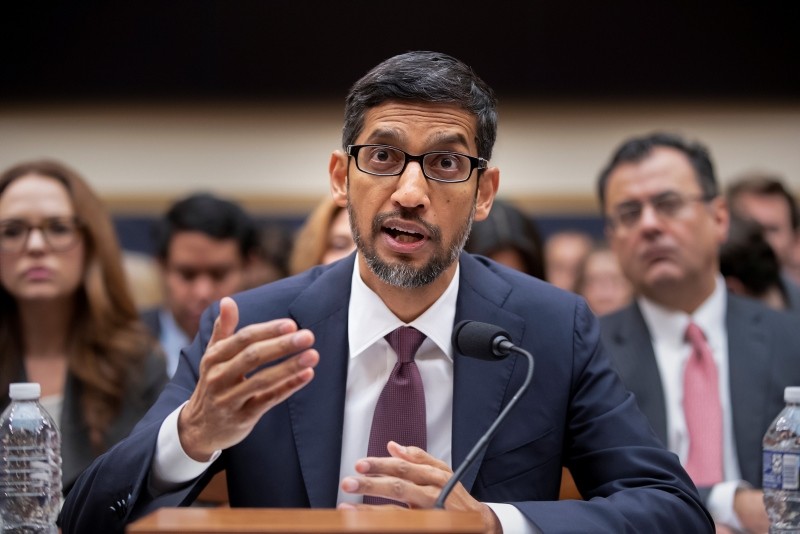 He also expressed concerns that Google's business practices may have been influenced by employees' political bias against conservatives.

The question of bias has dogged tech companies for years, but there has been no credible evidence that political leanings factor into Google's search algorithm.

Rep. Jerrold Nadler of New York, the committee's top Democrat, called the notion of bias a "delusion" and a "right-wing conspiracy theory."

Nadler says Tuesday's hearing is the committee's fourth one to address political bias. Hinting at a new agenda under Democratic control next year, Nadler said lawmakers should instead examine issues such as the spread of misinformation and Russia's efforts to influence U.S. elections online.

Pichai reiterated the company's position that it has no plans "right now" to launch a censored search engine in China. If that changes, Pichai promised to be "fully transparent" about the move. Pichai, who became CEO in 2015, has said that he wants Google to be in China serving Chinese users.

Pichai's appearance comes after he angered members of a Senate panel in September by declining their invitation to testify about foreign governments' manipulation of online services to sway U.S. elections. Pichai's no-show at that hearing was marked by an empty chair for Google alongside the Facebook and Twitter executives who did appear.

Pichai went to Washington later in September to mend fences, meeting with some two dozen Republicans and indicating he also planned to meet with Democrats. He took part last week in a White House meeting with other tech industry executives that focused mainly on getting government and businesses working more closely on accelerating emerging technologies such as artificial intelligence.

In October, Google announced it was shutting down its long-shunned Plus social network following its disclosure of a flaw discovered in March that could have exposed some personal information of as many as 500,000 people. The company deliberately avoided disclosing the privacy lapse at the time, in part to avoid drawing regulators' scrutiny and damaging its reputation, according to a Wall Street Journal report citing anonymous individuals and documents.

Lawmakers want Google to explain its failure to reveal the breach.

On Monday, the company said it was accelerating its plans to shutter Plus after discovering a privacy flaw that inadvertently exposed the names, email addresses, ages and other personal information of 52.5 million users last month. The service will now go dark in April instead of August, as previously announced.

"We work hard to ensure the integrity of our products, and we've put a number of checks and balances in place to ensure they continue to live up to our standards," Pichai said in his opening statement prepared for Tuesday's hearing.

Lawmakers are also concerned by recent reports that Google is poised to re-enter China with a search engine generating censored results to comply with the demands of that country's Communist government.

President Donald Trump has accused Google of rigging the results of its dominant search engine to suppress conservative viewpoints and highlight coverage from media that he says distribute "fake news." That's another area of potential questions to Pichai by committee members.

The company has denied any political bias, and there's no evidence of an anti-conservative tilt. Pichai said in his written testimony that "I lead this company without political bias and work to ensure that our products continue to operate that way. To do otherwise would go against our core principles and our business interests."

Google has good reason to communicate with lawmakers and policymakers, and to seek to weigh in on thorny issues. Trump and some lawmakers have raised the possibility of asking regulators to investigate whether Google — which handles nearly two of every three online searches in the U.S. — has abused its clout as a major gateway to the internet to stifle competition.

And momentum is building in Congress for legislation to put stricter limits and privacy protections around the big tech companies' collection of data. With the Democrats having captured control of the House in the midterm elections, and poised to take over as the majority running the Judiciary Committee next month, tougher legislation could be in the offing.

Pichai, a former engineer, took the helm of Google in 2015 in a major restructuring that made Google a division of conglomerate Alphabet Inc. — whose businesses include Waymo, a self-driving technology development company. Bolstering the dominance of its search engine, Google's Android operating system runs most of the world's smartphones, and its other services — including Gmail, YouTube, online ads and the Chrome web browser — are widely used.