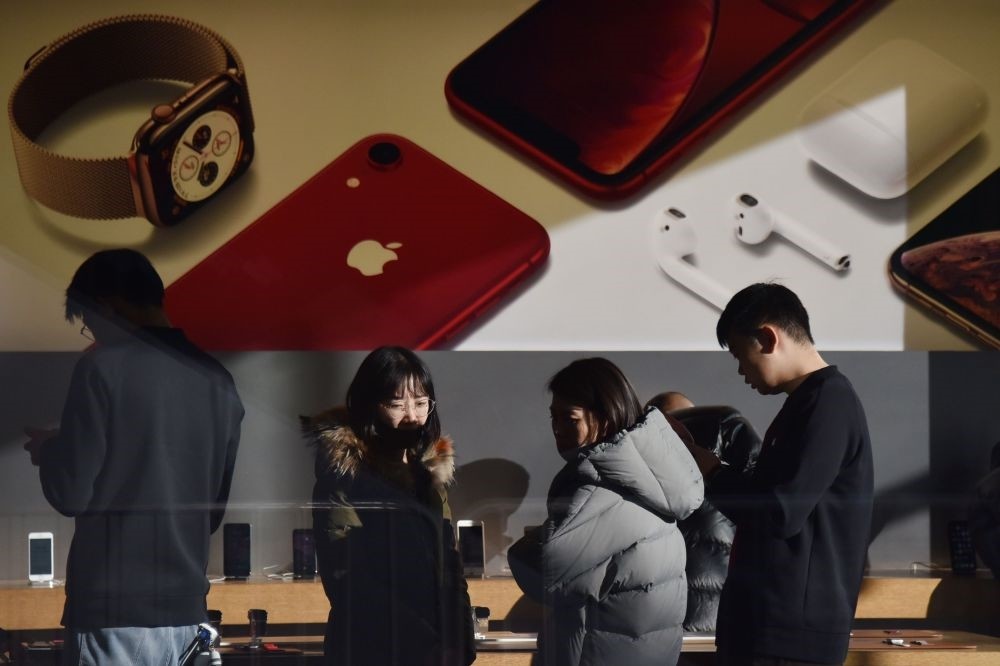 Although a Chinese court has ordered a sales ban of some older Apple iPhone models in China, stores in the country say are still continuing to sell them

Apple stores in China continued with business as usual yesterday despite a court-ordered ban on iPhone sales, but the U.S. tech giant faces a growing nationalist backlash over the U.S.-sought arrest of a Huawei executive.

According to U.S. chipmaker Qualcomm, which requested the ban, the Fuzhou Intermediate People's Court ordered four Apple subsidiaries to stop selling older models of the iPhone, including the 7, 7 Plus, 8, and 8 Plus.

But Apple stores contacted by Agence France-Presse (AFP) in Beijing, Shanghai and Fuzhou said they were still selling those older models - confirming a company statement that all remain available.

Sales staff at a Beijing Apple store said they had not yet received any internal notices about the court injunction on iPhone sales.

"If the ban is ultimately imposed, there will be no Apple products under 6,500 yuan ($940) in China," noted Wang Xi, a senior market analyst at research firm IDC.

That would give Chinese smartphone brands, such as Huawei, "more opportunities in the high-end market," he told AFP.

Qualcomm's request to halt iPhone sales is part of a long-running patent dispute with Apple.

Separately, Apple is also the target of nationalist sentiment over the arrest of Huawei's chief financial officer in Canada at the behest of the United States on alleged Iran sanctions violations.

The Chinese government has condemned the arrest and demanded her release.

Some Chinese netizens and companies have also turned against Apple.

"What if China banned Apple the way the U.S. has banned Huawei?" wrote one user on Twitter-like Weibo in a post that garnered more than 500 likes. "What if Apple lost its manufacturing center in China?"

A tech firm based in southwestern China, Chengdu RYD Information Technology, said it would reward employees who bought Huawei products with subsidies in an internal notice that it later confirmed via its official WeChat account.

The Shanghai Nanchong Chamber of Commerce confirmed that it too was offering subsidies for Huawei smartphones, and that staff and executive members of the business group would "lose their positions" if found with Apple products.

It seems that "general sentiment is gradually turning to against Apple and support Huawei now," due to recent events, such as Meng's arrest and the U.S.-China trade war, said Wang.

China is a crucial market for Apple, but is has been overtaken by Chinese competitors in recent years.

According to a 2018 financial report, China, Hong Kong and Taiwan were together Apple's third-largest market by net sales, after the Americas and Europe.

Apple chief executive Tim Cook has also made regular visits to China, and has touted the company's inroads in the Chinese market as well as its manufacturing there.

But Apple's premium-priced products remain out of reach for many users, increasing the appeal of more affordable phones produced by local companies.

Apple has the fifth-largest market share in China, trailing behind Huawei, Oppo, Vivo and Xiaomi, according to data from IDC.

Qualcomm, the leading supplier of chips for mobile devices, serves several Apple competitors in China, including Huawei, and has been in a prolonged legal battle with Apple in recent years.

Apple has claimed that Qualcomm is abusing its market power over certain mobile chipsets in order to demand unfair royalties, joining a string of antitrust actions against the chipmaker.

According to Qualcomm's U.S. lawsuit, Apple's goal was to buy mobile chips from Intel instead of depending on Qualcomm.

An Apple statement to AFP called Qualcomm's effort to ban iPhone sales in China a "desperate move by a company whose illegal practices are under investigation by regulators around the world," and added that "we will pursue all our legal options through the courts."