Huawei calls on US, others to show proof of security risk 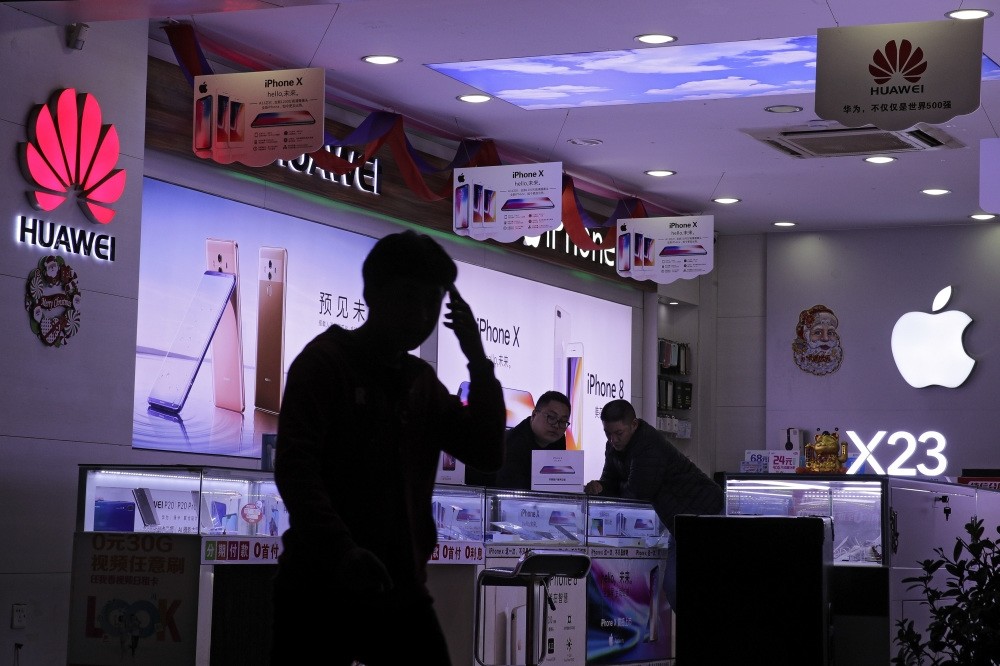 A man walks by a worker attending to a customer at a mobile phone retail shop selling Huawei and Apple smartphones in Shenzhen in south China's Guangdong province yesterday.
by Associated Press Dec 19, 2018 12:00 am

In the face of Western fears, Huawei defended its global ambitions and network security and vowed yesterday that there is no evidence that the company poses a threat to the national security of any country

The chairman of Huawei challenged the United States and other governments to provide evidence for claims the Chinese tech giant is a security risk as the company launched a public relations effort yesterday to defuse fears that threaten its role in next-generation communications.

Talking to reporters who were invited to Huawei Technologies Ltd.'s headquarters, Ken Hu complained accusations against the biggest global maker of network gear stem from "ideology and geopolitics." He warned excluding Huawei from fifth-generation networks in Australia and other markets would hurt consumers by raising prices and slowing innovation.

Australia and New Zealand have barred Huawei in 5G networks on security grounds. They joined the United States and Taiwan, which have broader curbs on Huawei. Japan's cybersecurity agency says suppliers including Huawei that are deemed high-risk will be excluded from government purchases.

The curbs have had little impact so far on Huawei, which says global sales are on track to top $100 billion this year. But the normally press-shy company's decision to hold yesterday's event appeared to reflect growing concern the accusations could hurt it in an emerging 5G market that industry analysts say could be worth $20 billion a year by 2022.

Hu, who appears at industry events but rarely gives interviews, talked for two hours and 20 minutes with American, European and Asian reporters.

"If you have proof or evidence, it should be made known," said Hu. "Maybe not to Huawei and maybe not to the public, but to telecom operators, because they are the ones that buy Huawei."

Huawei, founded in 1987 by a former military engineer, rejects accusations that it is controlled by the ruling Communist Party or designs equipment to facilitate eavesdropping. But foreign officials cite a Chinese law that requires companies to cooperate with intelligence agencies and express concern telecom equipment suppliers might be required to modify products.

The emergence of 5G has heightened those fears. The technology is meant to support a vast expansion of telecoms networks to connect self-driving cars, factory robots, medical devices and power plants. That has prompted governments increasingly to view telecoms networks as strategic national assets.

"There has never been any evidence that our equipment poses a security threat," said Hu. He added later, "We have never accepted requests from any government to damage the networks or business of any of our customers."

Hu's comments echoed previous denials by company spokespeople. But they marked the first time such a senior figure has directly addressed foreign security complaints, underscoring the company's sensitivity to them.

Hu noted a Chinese foreign ministry spokesman said Dec. 10 that no law requires companies to modify equipment to permit secret access. "We haven't received any request to provide improper information," he said. "In the future, we will also act in strict accordance with the law in dealing with similar situations."

The lack of public evidence to support accusations against Huawei has prompted industry analysts to suggest they are an excuse to shield U.S. or European competitors against the rise of a Chinese challenger. Asked about that, Hu said reducing competition would hamper innovation and raise costs for consumers.

Hu cited what he said was a forecast by a research firm, Frontier Economics, that the cost of installing 5G wireless base stations in Australia would be 15 to 40 percent higher without competition from Huawei. He said the total cost could be several billion dollars higher. "You can't make yourself more excellent by blocking competitors from the playing field," he said.

Despite "efforts to use politics to interfere with industry growth," Huawei has signed contracts with 25 telecom carriers for commercial or test use of 5G, according to Hu. He said the company has shipped more than 10,000 5G base stations. "We are proud to say that our customers continue to trust us," he said.

Huawei suffered another setback when its chief financial officer was arrested Dec. 1 in Canada in connection with U.S. accusations the company violated restrictions on sales of American technology to Iran.

Hu said he couldn't discuss the Iran accusations because the executive, Meng Wanzhou, is in the midst of court proceedings in Vancouver. Meng, the daughter of Huawei's founder, Ren Zhengfei, faces possible U.S. charges of lying to a bank to conceal Huawei's dealings with Iran.

However, Hu said Huawei is "very confident in our trade compliance management." Echoing earlier company statements, he expressed "confidence in the fairness and independence" of courts involved in Meng's case. Asked whether Meng's arrest made Huawei executives reluctant to leave China, Hu laughed and said, "There is no impact on our travel plans. At this time yesterday, I was on a plane" returning from Europe.

Another Chinese company, ZTE Corp., was nearly forced out of business this year after Washington blocked it from buying U.S. components and technology over its exports to Iran and North Korea. President Donald Trump restored access after ZTE paid a $1 billion fine, replaced its executives and hired U.S.-selected compliance managers.

Asked whether Huawei would be hurt if it faced similar curbs, Hu said he couldn't talk about something that hadn't happened. But he said the company has a global network of 13,000 suppliers and a "diversified supply strategy" that allowed it cope with Japan's 2011 tsunami and other disruptions.

The company has a workforce of 180,000 and China's biggest corporate research-and-development budget. It operates in 170 countries and dominates developing markets in Asia, Africa and Latin America.

Analysts have warned Huawei's political importance to Beijing would make any U.S. attempt to impose ZTE-style controls an explosive issue. Relations already are strained over Trump's tariff hikes on billions of dollars of Chinese imports in a fight over complaints Beijing steals or pressures companies to hand over technology.

Hu promised repeatedly to expand efforts to respond to "legitimate concerns" from regulators, telecom carriers or the public. "We will step up our efforts in communicating and collaborating with governments around the world," he said. Huawei has opened centers in Britain, Germany and Canada for governments to test its equipment and software. Its newest "security transparency center" is due to open in Belgium in the first quarter of 2019. Huawei plans to invest $2 billion over the next five years to improve its software development, according to Hu. That follows a report in July by the board that oversees the testing center in Britain that faulted Huawei for weak software engineering.