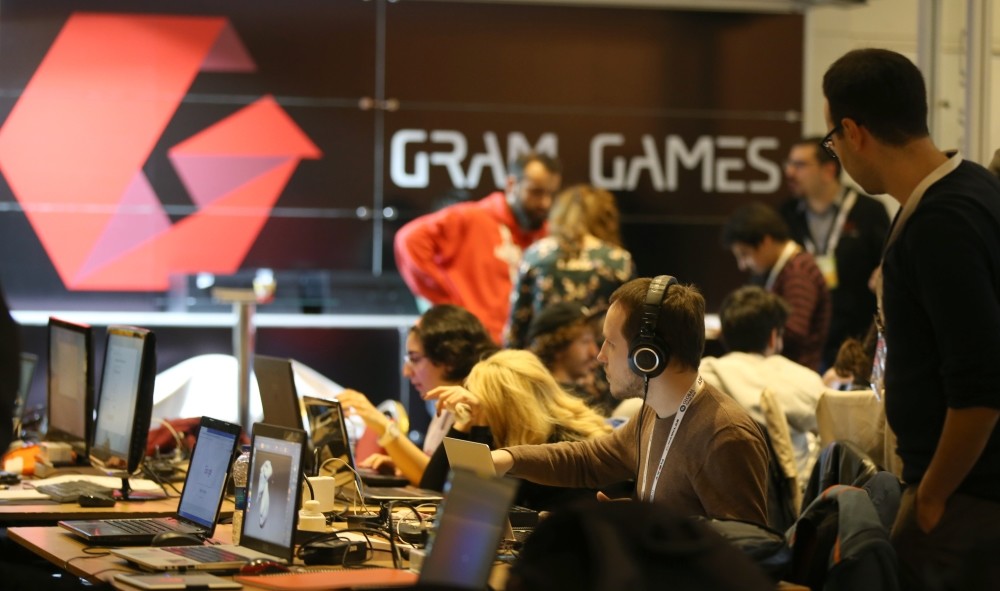 At the Global Game Jam event organized by ODTÜ Teknokent, 250 teams reflected on what ‘home' meant to them by creating digital games on that theme. Today, new game developers are quickly emerging in Turkey's digital game export market, which has surpassed $1 billion

The size of the global video game market, which was valued at around $138 billion in 2018, is expected to reach $180 billion by 2021. Turkey, which is seeking to not just be a consumer but also a producer of video games, is increasing its support for local video game developers. According to the Game Developers Association of Turkey (TOGED), the country's digital game exports reached $1.05 billion, compared to only $500 million in 2016.

Judging by the statistics, the steps taken regarding Turkey's growing game development sector is important. The gaming market in Turkey is estimated to have reached $750 million in size. In Turkey, the $280-million launch of Gram Games and the $100 million Peak Games has made with game sales, has greatly encouraged game developers and startups.

The Global Game Jam (GGJ) event, which unites digital game developers from around the world for 48 hours under a single theme, has produced more than 8,000 games this year.

At the Ankara leg of the global event, 250 game developers meeting at Middle East Technical University (ODTÜ) Teknokent ATOM created colorful and interesting games under the theme "What does home mean to you?" Games produced at the event incorporated familiar themes such as avoiding a beating from your mother (such as a flying slipper!), family members asking about when you will get married and calming your father down after getting home late.

Game developers who participated in the event via numerous centers in 114 different countries produced more than 8,000 games by the end of the event. GGJ Atom, which is a part of ODTÜ Teknokent and an important center for the event in Turkey and the world, has seen the participation of 250 game developers this year. The participants at GGJ ATOM have developed 56 games in total. After learning about the "home" theme at the beginning of the event, they began using their imaginations and coding abilities to produce interesting games.

I had the opportunity to witness the excitement of the 250 participating teams at the GGJ Atom event in its 10th year. I got to spend some 24 hours with the young developers. I tried to understand their excitement and dreams. The young developers, some of whom were sleeping on carpets and chairs, seemed very happy. It was great to see some female developers at almost every table and at organizational levels at the event. 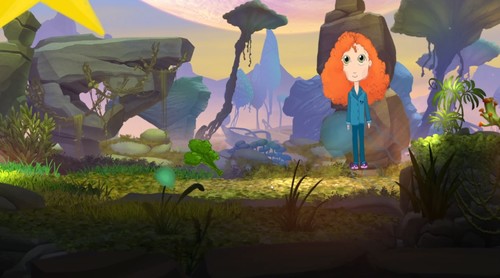 A still from one of the games developed during the Global Game Jam in Ankara.

Ahmet Yozgatlıgil, the assistant to ODTÜ rector and deputy chairman of the ODTÜ Teknokent board of directors, said they were trying to ensure the development of the digital gaming sector in Turkey.

Stating that there were 24 video game firms within ODTÜ Teknokent area, Yozgatlıgil went on to say: "Within 'ATOM' which is the first and only pre-incubation center in Turkey, we're continuing our efforts to help train more developers for the digital gaming sector."

Expressing that among the 105 groups that have been supported until now, 25 have become companies, Yozgatlıgil said they are providing services for more than 1,500 developers. Yozgatlıgil added that 570 different games have been developed so far, which have reached more than 30 million gaming enthusiasts. "ODTÜ Teknokent companies have exported products worth $1.3 billion since its foundation. We intend to take this number to a much higher level with our initiatives and support for the gaming sector. GGJ is one of the most important events that we support the ecosystem with. Via this event, we come together with gaming enthusiasts every year," he said.

More than a competition

The event emphasizes that cooperation is better than competition and working together rather than individual work is promoted.

And a simple theme such as "home" can have very different connotations for people. The games people imagined included stories of heroism, messy rooms and children trying to escape from the wrath of their mothers.

In the game that says "your home is your heart," it is possible to gain points by collecting hearts. Many developers describe home as a shelter, where you feel safe and your comfort zone. To protect this comfort zone, you have to fight monsters. Some developers on the other hand consider the entire earth and galaxy as their home.

In the game "Dream House," sleepwalker Yasemin who has a special fondness for sleep finds herself in her room in a dream. Yasemin, who sleeps all day and cannot go outside of her dreams, plays games by interacting with objects in her room.

l In the game titled "Ayför Nörde," the players try to build their houses on wheels.

The game "Who Are You" is about the adventures of an old man with his memories in a home that he no longer recognizes.

The game "Carapace" is about a turtle that can grow by eating fish and moss but has to evade sharks and piranhas. To protect itself from these dangers, the turtle has to hide in its shell, in other words in its home.

About 10 years ago, Ferhan Özkan from the ODTÜ IEEE students group had spoken about this project with great excitement. "As the ODTÜ Atom team we're bringing the Global Game Jam organization to Turkey. We want to organize this 48-hour game development hackathon at Atom," he said.

Once he told me about the idea, I participated with great excitement as well. I witnessed their enthusiasm and contacted many executives I was acquainted with, to find support for them.

As a result, Ferhan and many of his friends from IEEE Turkey managed to get the approval of ODTÜ Teknokent and ODTÜ administrators for this project. Today, this 48-hour global game hackathon that has participants from dozens of countries and is organized in 17 cities in Turkey. It has taken place in Turkey for the last 10 years.

It is very meaningful that the parents who have been putting their children in front of screens to keep them from crying are now complaining about them being addicted to screens. Parents that cannot find a solution for their own addiction to watching TV series or sports are part of the problem, and are not making any sacrifices to be part of the solution. The habits that people gain from an early age today becoming part of a new field of business. But to have balance, it is important to learn how and when to stop. Gaming will continue to be a passion for almost all children. There is no escape from this fact. The important thing is ensuring that while your children are playing and having fun, they are the ones that are setting the rules that will determine their tastes later on.

Türk Telekom's digital gaming platform Playstore continues innovating to respond to the needs of gaming enthusiasts while providing them with access to popular games. Playstore has launched the newest and most popular games simultaneously with the rest of the world, and with its partnership with OverGame which makes PlayStation 4 (PS4) games and gaming equipment available to gaming enthusiasts at special prices.

The newest PlayStation 4 games such as "Marvel's Spider-Man," "Detroit: Became Human" and "God of War," as well as other PS4 games at great prices and wireless devices such as Dual Shock V2 and Razer gaming equipment, mouse and mouse pads will be sold via the Playstore with special offers and prices.

Gaming enthusiasts will be able to use the coupon codes of PlayStation 4 games and gaming equipment obtained from the Playstore on the OverGame website and be able to complete their purchases and delivery processes. Türk Telekom home internet subscribers will be able to access installment plans for up to 12 months through their bills.

The creation of new companies in Turkey that make heavy use of AI may have a transformative effect on many sectors and may outpace names that have traditionally been considered the leaders in their fields.

This is due to the fact that the added value created by institutions using AI is continually increasing. This is important in increasing the number of AI startups in Turkey created via reverse brain drain. The AI startup Tarentum has seen a lot of attention from leading investors in Turkey and has received TL 4 million in investments. The startup aims to grow globally in 2019.

Tarentum AI founded at İTÜ Teknokent in 2017 develops products in the fields of renewable energy, banking/finance and gaming sectors by focusing on artificial intelligence and machine learning technologies. Tarentum's founders are extremely experienced names in the field of technology and have international experience. Some of its founding partners are Oğuz Silahtar, an MIT graduate who returned to Turkey after a 20-year career in the U.S. and Utku Azman who has worked for companies such as Bell Labs, McKinsey, and Google. Burak Aydın, former chief executive of Intel Turkey, is the founding investor of the company.

The capabilities of software company employees are not only measured by their coding abilities but also by their capability of sharing information that illuminates others. Sherpa, which specializes in digital design processes and user experience, supports the startup ecosystem with their blog posts that are meant to guide people. It is easy to recommend the cloud to startups that want to keep accelerating sales numbers. But it is not easy to express how this should be done. The blog explains ideas that can help in growth-focused sales expansion and step by step instructions to startups. Registration on the blog is free and it offers endless knowledge in subjects such as education, activities and books.

The 2018 statistics regarding the Turkish startup ecosystem will be announced on Feb. 5 by Startups.Watch. At the special event accessible to members, details regarding the investments startups have received will be announced. The startups in question are operating in a wide variety of fields such as artificial intelligence, e-commerce, gaming and financial technologies. Investors, entrepreneurs, executives of institutions and government executives will come together at the event. Attendees will be talking about the evaluation of the previous year and projections regarding the future.