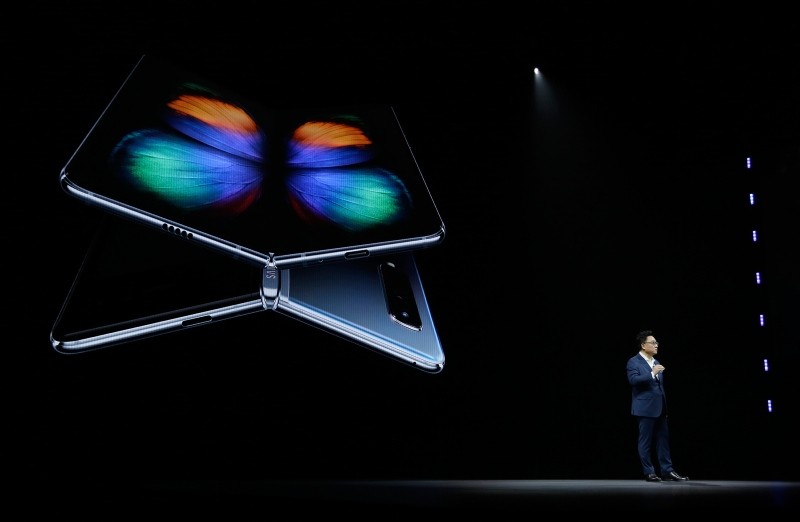 DJ Koh, Samsung President and CEO of IT and Mobile Communications, talks about the new Samsung Galaxy Fold smartphone during an event Wednesday, Feb. 20, 2019, in San Francisco. (AP Photo)
by Compiled from Wire Services Feb 20, 2019 10:30 pm

Samsung on Wednesday unveiled its Galaxy Fold, the first foldable handset from a major manufacturer as part of an effort to rev up demand in the slumping smartphone sector.

The South Korean giant released the device which unfolds to a display of 7.3 inches to serve as both a smartphone and tablet.

"We are giving you a device that doesn't just define a new category, it defies category," said Samsung's Justin Denison at a San Francisco product launch event.

The phone announced Wednesday in San Francisco will be called the Galaxy Fold and will sell for $1,980 when it is released April 26.

When fully unfolded, the device will be able to simultaneously run three different apps on the screen.

The device "breaks new ground because it answers skeptics who said that everything that could be done has been done," DJ Koh, chief executive of Samsung Electronics, said at the event. "We are here to prove them wrong."

The device could help Samsung, the world's largest mobile phone maker, compete against rivals such as Apple Inc and China's Huawei Technologies Co Ltd, both of which sell premium smart phones. While Huawei gained market share last year, the entire industry saw overall unit sales fall as the Chinese economy struggled toward the end of the year.

Samsung said it had developed new manufacturing processes for the phone's hinge and flexible display to tolerate being open and closed hundreds of thousands of times. Koh said the aim of the launch was to "to recharge growth for our industry."

Samsung is hoping the Galaxy Fold will spur more people to upgrade their phones and reverse a recent slump that saw its smartphone sales fall 8 percent last year. But some analysts were skeptical.

Phones like the Galaxy Fold "are likely sell to a very limited market of technology aficionados who like big screens and have big wallets," said IDC analyst Ramon Llamas.

The new phones are able take wider-angle shots than previous models and can charge other devices, including wireless headphones and smartwatches. A fourth S10 model, due out this spring, will have faster wireless speeds through the emerging 5G cellular network.

But those improvements aren't a big leap from the smartphones released during the past few years by Samsung, Apple and other top manufacturers. With the pace of smartphone innovation seemingly locked in baby steps, consumers are holding on to their existing devices for longer periods than they have in the past.

Consumers' reluctance to upgrade has been compounded by smartphone sticker shock, which the Galaxy Fold seems unlikely to alleviate. Prices for some existing phones models have soared above $1,000 .

Samsung is offering a slightly smaller S10 model for $750 in an attempt to make smartphones more affordable, but the higher-end models sell for $900 and $1,000.

All three S10 models will come out March 8, with pre-orders starting Thursday.

Samsung trumpeted its 10th anniversary lineup ahead of a major mobile device conference in Barcelona next week. Huawei, which is threatening to overtake Apple as the world's second biggest seller of smartphones, has promised to use the Spain showcase to preview its own device with a foldable screen and the ability to connect to 5G networks as they become operational during the next few years.