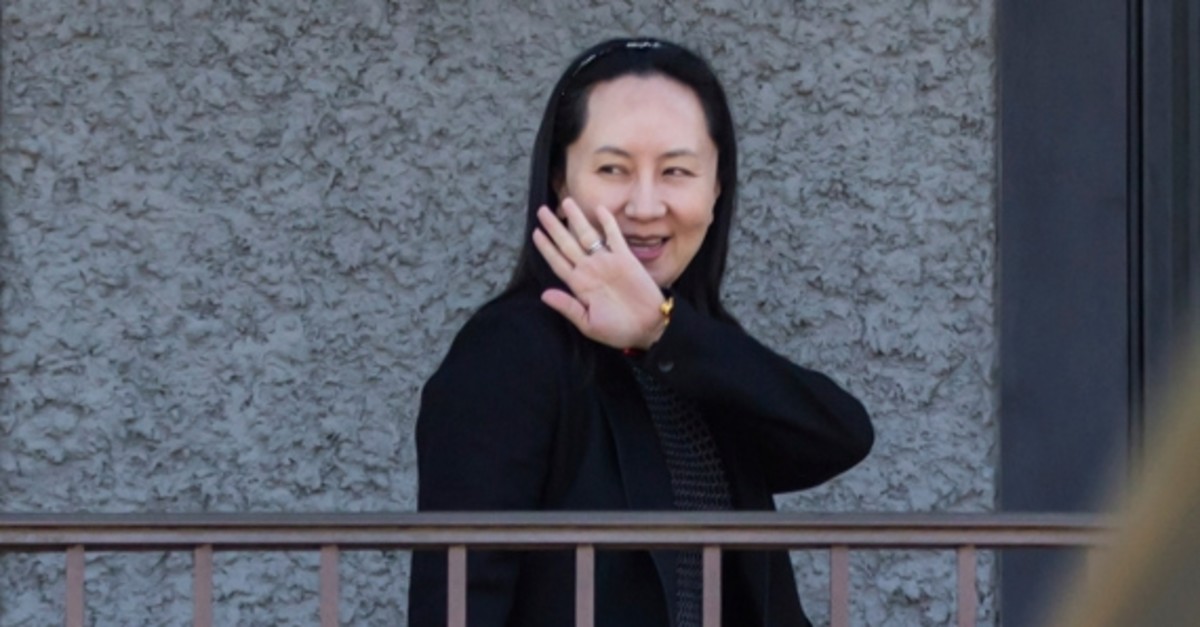 Huawei Chief Financial Officer Meng Wanzhou waves as she returns home after attending a court appearance in Vancouver, British Columbia, Wednesday May 8, 2019. (AP Photo)
by May 09, 2019 1:33 am

Chinese telecom giant Huawei said Wednesday it will apply for a stay of extradition proceedings against its chief financial officer Meng Wanzhou, who was arrested in Vancouver at the request of US authorities in December.

The US accuses Meng, Huawei, a US subsidiary and telecom equipment seller Skycom of committing bank fraud, wire fraud and conspiracy to commit money laundering. The charges are linked to possible violations of US sanctions against Iran.

The 47-year-old daughter of Huawei founder Ren Zhengfei made an appearance in a crowded courtroom in Vancouver early Wednesday in the latest step in her much-anticipated extradition hearing.

"We have maintained that her US-ordered arrest was an unlawful abuse of process, one guided by political considerations and tactics not by the rule of law."

Meng's lawyer Scott Fenton said comments by US President Donald Trump that he was ready to intervene in Meng's case if it helped him get a more favourable trade deal with China suggested it was politically motivated.

Howes said that Meng had been the subject of "serious and repeated violations" of her charter rights as a result of a "coordinated effort" between the FBI and the Royal Canadian Mounted Police (RCMP) and the Canadian Border Services Agency (CBSA).

"The RCMP intentionally delayed the presentation of the arrest warrant in order to carry out the unlawful detention and search against Ms Meng," Howes said.

"Under the pretence of a routine border check," officials searched her luggage, seized her cellphone and other electronic devices, and compelled Meng to reveal her passwords, Howes said.

More key evidence regarding her arrest remains in the hands of RCMP and CBSA, he added, saying Meng will apply to the court asking to disclose more evidence on the matter.

The disclosure application was set to begin on September 23, 2019, at British Columbia Supreme Court.

"The US allegations against Ms Meng are based on violations of US sanctions against Iran. However, Canada does not impose sanctions on financial services in relation to Iran," Howes said.

Because of the fact that the allegations she faces in the US are not a crime in Canada, the extradition request does not satisfy the "double criminality" test of Canada's extradition law, Howes said.

Meng's arrest has set off a diplomatic showdown between Canada and China, as Ottawa finds itself caught between the two economic giants.

China is demanding Meng's immediate release and has called on the US to withdraw the extradition request and stop the "unreasonable suppression" of Chinese companies.

Two Canadians, businessman Michael Spavor and former diplomat Michael Kovrig, were arrested in December in China over accusations of endangering state security, in what some saw as retaliation for Canada's detainment of Meng.

While the two men have been allowed regular consular visits, they have not been charged and have been denied access to lawyers.

In the meantime, Meng remains free on a 10-million-Canadian-dollar (7.4-million-US-dollar) bail and resides at one of the mansions in Vancouver she co-owns with her husband.

On Wednesday, Meng's lawyers asked that she be allowed to move to another mansion in Vancouver's Shaughnessy neighbourhood, which they said is more secure.