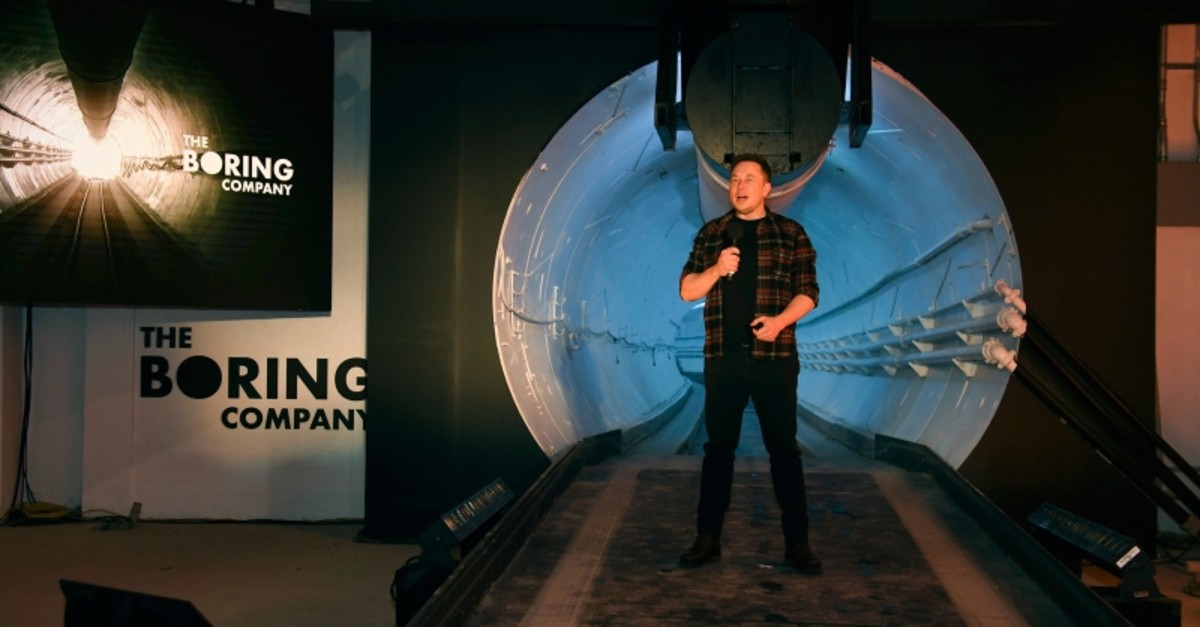 In this Dec. 18, 2018 file photo Elon Musk, co-founder and chief executive officer of Tesla Inc., speaks during an unveiling event for the Boring Co. Hawthorne test tunnel in Hawthorne, Calif. (AP Photo)
by Compiled from Wire Services May 23, 2019 6:59 pm

A company backed by tech billionaire Elon Musk has been granted a nearly $49 million contract to build a transit system using self-driving vehicles underneath the Las Vegas Convention Center.

The board of directors of the Las Vegas Convention and Visitors Authority approved the contract Wednesday with The Boring Company, the Musk-backed enterprise based in Hawthorne, California, which has not completed a commercial project.

The company plans to construct a twin tunnel system running less than a mile (1.6 kilometers) long. The system will use self-driving electric vehicles capable of transporting up to 16 people.

The board settled on Boring Co's proposal because it was considerably cheaper than other options, with a faster construction time, and because an underground system creates less disturbance, according to a press release. The loop is supposed to accommodate at least 4,400 passengers per hour, with the company promising to shorten a 15-minute walk to a one-minute ride.

But the path to approval has not been smooth. Ahead of the meeting, two board members, Michele Fiore and Corlyn Goodman, the Las Vegas mayor, voiced skepticism about taking a risk on a start-up that has yet to build a transit system for commercial use.

So far the only tunnel Boring has completed is a roughly mile-long test route under Hawthorne. The company was in negotiations to build a tunnel that would connect downtown Chicago and O'Hare International Airport. However, now that Chicago Mayor Rahm Emanuel is leaving office, the project has stalled.

Talks to build a high-speed tunnel between John F. Kennedy International Airport and Manhattan sputtered. A proposed tunnel connecting Washington to Baltimore is going through an environmental review process. Boring has also proposed a 3.6-mile underground route that would carry baseball fans between Dodger Stadium and a nearby Metro subway station.

Fiore and Goodman advocated for a competing proposal by Doppelmayr Garaventa, an established Austrian company, for an elevated rail transit system. Goodman, in a May 14 letter she circulated among fellow board members, said that with a 1-billion-dollar expansion under way that will drive tourism, the board must tread carefully.

"Now is NOT the time to experiment with an untested, unproven transportation system that will impact our region's MOST IMPORTANT INDUSTRY," Fiore wrote. "The first ranked proposal under consideration is from a 3-year-old applicant that to date has completed ZERO functional systems."

An original proposal by Doppelmayr was estimated to cost $215 million for its above-ground system, according to the Las Vegas Sun. But in Goodman's letter, she said the company was willing to complete it at a far lower cost of $85 million, though that still would be higher than Boring's previously estimated $35-million to $55-million cost.

The Convention and Visitors Authority said Wednesday in a release that the Boring contract calls for three underground passenger stations, a tunnel for pedestrian traffic and two tunnels for vehicles.

"The Boring Company is excited to contribute to the future of Las Vegas, and work with leaders who have a vision for transportation," company President Steve Davis said in the release.

The contract includes a condition mandating that the company reimburse the authority in full through a payment-recovery bond should it fail to complete the project.

Boring has searched for ways to make tunneling faster and cheaper.

Musk has said the price tag was much lower than that of a typical subway project, which could cost hundreds of millions of dollars per mile. Boring Co cites a smaller diameter for its tunnels as one of the reasons it's able to reduce costs.

"Musk uses basically standard technology. What's new is the fact that the vehicles are smaller. A smaller tunnel with traditional technology can be built faster," said Herbert Einstein, a professor of engineering at the Massachusetts Institute of Technology.

Michael Manville, an associate professor of urban planning at the UCLA Luskin School of Public Affairs, said it's surprising to him that an underground plan could beat an elevated rail proposal on cost, since tunneling is generally more expensive.

However, he added that it's difficult to evaluate the Las Vegas project based on the few details released by Boring.

"This is kind of a market test for him. Can he now build something that is more commercially viable than what he's done with his test tunnel in Hawthorne?" Manville said. "But there's nothing intrinsically interesting about building a tunnel to move people around. That's what a subway is, right?"

The convention center aims to complete the transit project in time for an annual trade show in 2021, but Musk tweeted in March that the system would be operational by the end of this year.