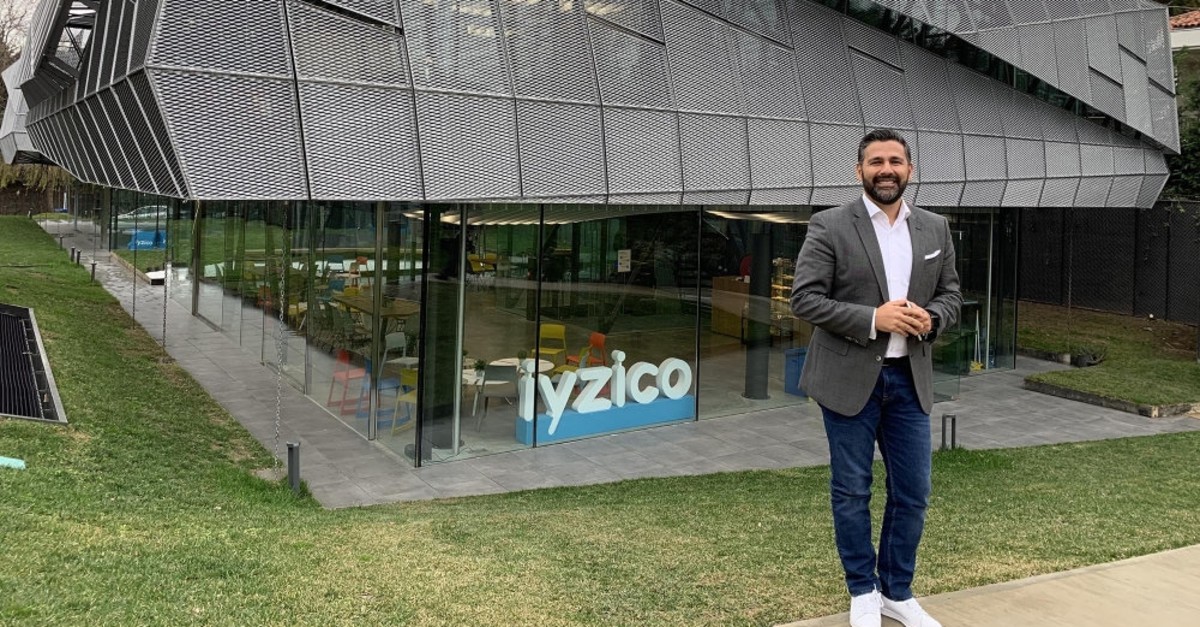 Barbaros u00d6zbuu011futu, the co-founder and CEO of iyzico, a Turkish fintech startup that was recently acquired by a global giant PayU in a $165 million deal, has said the acquisition reassures all entrepreneurs and investors.
by Timur Sırt Jun 15, 2019 12:19 am

World giant PayU acquired iyzico, which provides secure payment solutions to thousands of e-commerce ventures in Turkey, for $165 million. Barbaros Özbuğutu, the founder and CEO of iyzico, said the investment showed that Turkey still has a long way to go in payment technology

Serving more than 32,000 e-commerce sites in Turkey, including global brands such as Amazon, Zara, Sahibinden, Çiçeksepeti, H&M, Nike, Zara and Adidas, the fintech startup iyzico was acquired by the global payment technologies giant PayU for $165 million. Operating in 17 countries as part of the Naspers Group, the world's largest technology investor, PayU acquired iyzico, a secure payment service established by Barbaros Özbuğutu and Tahsin Isın in 2013. With this acquisition, Turkey has become PayU's second largest market in Europe, the Middle East and Africa, after Poland. "I think that the acquisition that took place in Turkey in this period reassures all entrepreneurs and investors," iyzico co-founder Özbuğutu told Turkish daily Sabah after the agreement. "PayU, a global player, made this $165 million acquisition, showing that Turkey still has a long way to go. We keep going with the investor that shares our vision and excitement. We will continue to present the vision we have developed to democratize payment systems in the world for everyone to use under PayU."

'We digitized the process'

Özbuğutu added that they were rewarded for the steps taken by Iyzico, which provides secure online shopping services to more than 300 marketplaces and 420,000 sub-member businesses, toward the digitalization of the payment process. "As the iyzico team, we have enabled many businesses that have difficulty in obtaining services from banks in terms of virtual point of sale, to obtain virtual POS through an easy and accessible digital process. We asked our lawyers how to digitize the payment process. We did not ask if it could be done. We only asked how. Previously, those who signed the contract and sent it to us with payment did not use the payment system. With the solution we developed, more than 500,000 end-users experienced Protected Shopping, and we reached 3.8 billion transactions."

Mario Shiliashki, CEO of PayU Global Payment Organization, elaborated on their investment in the Turkish fintech sector. "As PayU, we have incorporated iyzico to secure our position in local markets and become the number one payment provider in all the fast-growing markets in which we operate," Shiliashki said. "We are quite pleased that the iyzico team together with the founders, Barbaros and Tahsin, have joined our PayU team. It is of great importance for us to join forces with the iyzico team to become the world's number one fintech investor."

As a result of the agreement that has strengthened iyzico's position in the Turkish market, iyzico and PayU will work together to enlarge the e-commerce cake in Turkey, to provide innovative solutions to the needs of small and medium-sized enterprises in changing economic conditions and to develop fintech products aimed at end users. This merger, which will also serve as an e-export bridge, will enable iyzico to introduce technologies developed by PayU to the markets in which it currently operates, while facilitating the export of Turkish exporters to Central and Eastern European countries and Africa.

With the completion of the acquisition, the founding partners Barbaros Özbuğutu and Tahsin Isın will continue their duties in the management of the company, while the iyzico team will take over PayU's operations in Turkey. "Today is the beginning of a new era for iyzico," Özbuğutu, co-founder and CEO of iyzico, said. "This dream, which started with three people, turned into a team of 150 people and one of the most successful technology companies in Turkey, which has a transaction volume of billions of Turkish liras and increases the e-export range of our country one-and-a-half-fold. Therefore, we will share a portion of the income with our employees taking into consideration the activity and the duration of the stay."

'We witnessed the success of a good team'

The first domestic investment in iyzico, which received its first investment in the seed stage from abroad, was made by the 212 venture capital fund. Numan Numan, the founder of the 212 venture capital fund, explained the development of the process. "We lent support to Barbaros and Tahsin for the formation of the team before it became clear whether we would participate in the investment tour," Numan said. "The iyzico team showed what a good team could do. We found that a good team was essential in the startup. With iyzico, we had the chance to break out in the first venture supported by our fund. We showed that even with a single breakout in the first fund, a whole fund could be paid and that a good venture could emerge in Turkey on any ground. I think iyzico will inspire many ventures and investors."

Financial support in advance, not when needed

Barbaros Özbuğutu urged entrepreneurs to meet with investors before, not when there was a need for financing. "We started negotiations without the need for funding. Earlier investment may be necessary to accelerate growth. So it is imperative to act early. In addition, the chance to choose an investor would also favor the entrepreneur," Özbuğutu said, adding that it was a significant turning point for a global corporation like Amazon to believe and invest in iyzico's service quality.

Naspers, the global consumer Internet group of companies, is one of the world's largest technology investors. Leading companies established by Naspers, which invest and conduct operations in countries and markets with long-term growth potential around the world, strengthen individuals and enrich communities. The Group has prominent Internet businesses and partnerships in North America, South America, Africa, Central Europe, Eastern Europe and Asia, operating in areas such as classified online advertising, food service, payment systems, travel, education, health, as well as social and Internet platforms. PayU leverages its experience and expertise in payment systems to provide financial services in emerging markets. Thanks to its local operations in Asia, Central Europe, Eastern Europe, Latin America, the Middle East and Africa, it provides the best solutions for local markets with its expertise in these countries. As a leading online payment infrastructure provider in 18 rapidly growing markets, PayU's goal is to make payment processes fast, simple and efficient for both exporters and customers. It has been designed to meet the needs of all consumers with over 250 payment methods and PCI certified platforms. Markets, in which PayU operates with around 2.3 billion consumers, have significant growth potential for sellers. More than 1,800 payment systems specialists in local markets serve more than 300,000 sellers working with PayU and millions of online consumers.

Türk Telekom hosted the Cybersecurity Summit with 200 senior and local executives in attendance. Cybersecurity risks, which increased by 3.77 times compared to last year, were discussed.

Türk Telekom, which launched the largest cybersecurity center in Turkey, hosted the Cybersecurity Summit with the participation of over 200 senior executives from the technology sector at home and abroad. At the summit, methods of combating cyberthreats and global examples were discussed and solutions were developed.

"With the largest Cyber Security Center in Turkey, we continue to protect both our country and the most strategic and elite companies of our country against cyberthreats," said Türk Telekom Chairman Ömer Fatih Sayan.

The most precious jewel

Sayan pointed to the importance of cybersecurity and digital transformation. "It is inevitable that cybersecurity is the most debated issue," he continued. "If you have a shop with the world's rarest jewels, it can make you superior in terms of assets. But if you do not have the security to protect this jewel, someone comes when you expect it the least and cause all your efforts to go to waste. If you take cybersecurity in a similar way, no matter how much your infrastructure is provided, you are not the owner of that infrastructure unless you secure it. Ensuring cybersecurity is not only for eliminating the dangers in technology-intensive areas, but it is also a part of risks related to social and economic life and national security.

Ümit Önal, Executive Vice President of Marketing and Customer Services at Türk Telekom, said they evaluated everything from the internet of things to artificial Intelligence, from Cloud to Analytical and Big Data within the scope of digital transformation with new products and services. He said that they aimed to guide the sector in their digitalization journeys by giving weight to cybersecurity.

"As Turkey's first Cybersecurity Service Provider Telecom Operator for more than 10 years, we opened our cybersecurity Center on Dec. 24," Yusuf Kıraç, Assistant General Manager in charge of Technology at Türk Telekom, said. "A general analysis of our systems revealed that 1,023 attacks occurred in the first four months of 2019. Accordingly, the number of attacks increased by 3.77 in the first four months of 2019 compared to the same period of 2018.

Fourth-term ventures graduated from the workup startup acceleration program. In the Demo Day event, 11 new ventures made presentations, introducing their projects to the groups that they eyed for support.

The fourth term of the Workup Entrepreneurship Program, of which İşbank was the main supporter, has ended. Angel investors, venture capital companies, managers of acceleration and incubation programs, representatives from the financial world, and senior managers of İşbank and its subsidiaries participated in the Demo Day event at İş Sanat Concert Hall.

During the event, which brought together important stakeholders of the entrepreneurial ecosystem, 11 new graduates of Workup (Alivex, Devfolio, Givin, Gmply, Grabono, Juphy, OtoParlat, Pcichecklist, Securezi, Sertifier, Tolkido) introduced their activities and roadmaps to a group of viewers who could lend support in terms of investment and cooperation. The Workup Entrepreneurship Program, which started in 2017, has received more than 8,000 applications to date and has come together with hundreds of ventures. Including the fourth semester, a total of 40 ventures have so far graduated from the program, while 26 of 29 former graduates still continue to operate.

In his speech at the Demo Day event, İşbank General Manager Adnan Bali stressed that the most basic characteristic of the projects undertaken by the bank was their long-lastingness. "The program's fourth-term graduates are a nice reflection of our approach in this direction," he added.

Saying that they had taken part in Kolektif House since 2016 as the only bank here, Bali said that they supported entrepreneurs who became important players in today's production network with the Workup Entrepreneurship Program they started in 2017 and contributed to the development of their business ideas. Underlining that Workup helped entrepreneurs access the customer world and introduce themselves, Bali noted that they initially brought entrepreneurs together with the customer network of İşbank and its affiliates and helped them make room for themselves in the entrepreneurial world.