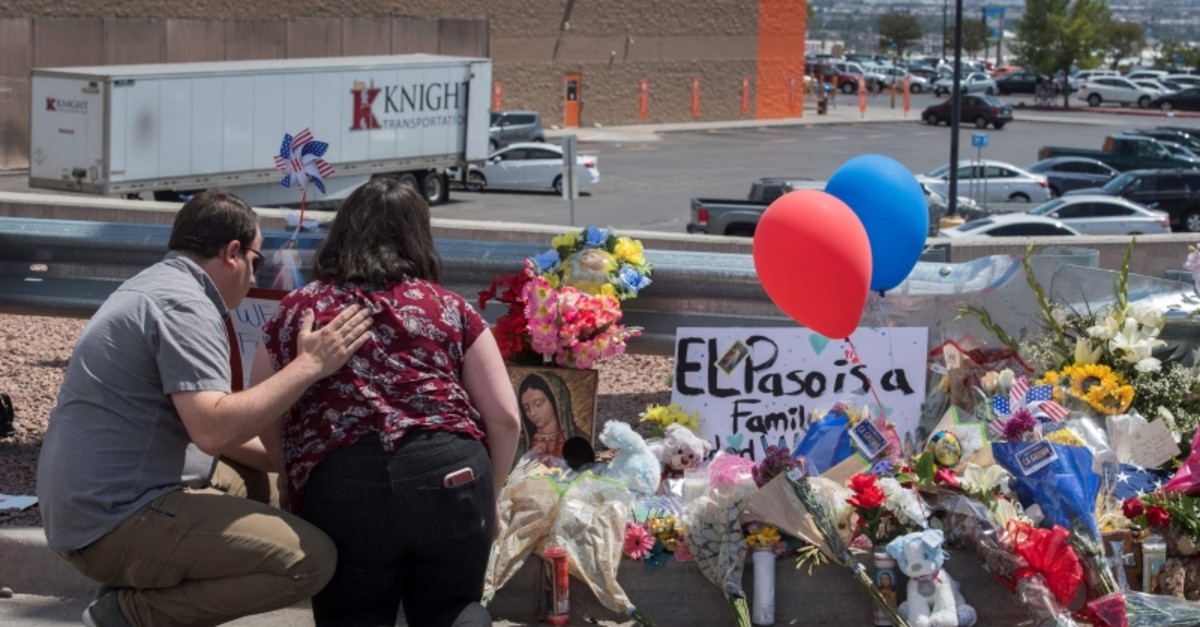 People pray beside a makeshift memorial outside the Cielo Vista Mall Wal-Mart (background) where a shooting left 20 people dead in El Paso, Texas, on August 4, 2019. (AP Photo)
by Compiled from Wire Services Aug 05, 2019 11:06 am

U.S. cyber security firm Cloudflare on Monday said the company will terminate online message board 8chan as its customer after a shooter used the messaging forum just before killing 20 people at a Walmart store in El Paso, Texas on Saturday.

The shooter is believed to have posted a four-page statement on 8chan, and called the Walmart attack "a response to the Hispanic invasion of Texas".

The suspect was officially identified as a 21-year-old white male from Allen, Texas, a Dallas suburb some 650 miles (1,046 km) east of El Paso, which lies along the Rio Grande, across the U.S.-Mexico border from Ciudad Juarez. Citing law enforcement officials, multiple news media reports named the suspect as Patrick Crusius.

The suspect's post on 8chan expressed support for the gunman who killed 51 people at two mosques in Christchurch, New Zealand, in March.

"We just sent a notice that we are terminating 8chan as a customer effective at midnight tonight Pacific Time," Cloudflare Chief Executive Officer Matthew Prince said in a blog post.

"Based on evidence we've seen, it appears that he (gunman)posted a screed to the site immediately before beginning his terrifying attack on the El Paso Walmart killing 20 people," Prince said.

The CEO's blog added that while 8chan did not violate law by not moderating the "hate-filled" content posted by its users, it has "created an environment that revels in violating its spirit".

Cloudflare's move terminating its cybersecurity and other services means 8chan could be exposed to distributed denial-of-service (DDoS) attacks, in which hackers take down a site by flooding it with fake traffic.

Prince said the network services provider had not taken the decision lightly.

"We reluctantly tolerate content that we find reprehensible, but we draw the line at platforms that have demonstrated they directly inspire tragic events and are lawless by design," he wrote.

"8chan has crossed that line."

Despite Cloudflare's move, Prince said terminating services to sites like 8chan would not make the internet safer or reduce online hate.

Two years ago, after a far-right rally in Charlottesville, Virginia in which a woman was killed, Cloudflare stopped providing services to neo-Nazi website The Daily Stormer.

"Today, the Daily Stormer is still available and still disgusting. They have bragged that they have more readers than ever. They are no longer Cloudflare's problem, but they remain the Internet's problem," Prince wrote.

"Unfortunately the action we take today won't fix hate online. It will almost certainly not even remove 8chan from the Internet. But it is the right thing to do. Hate online is a real issue."