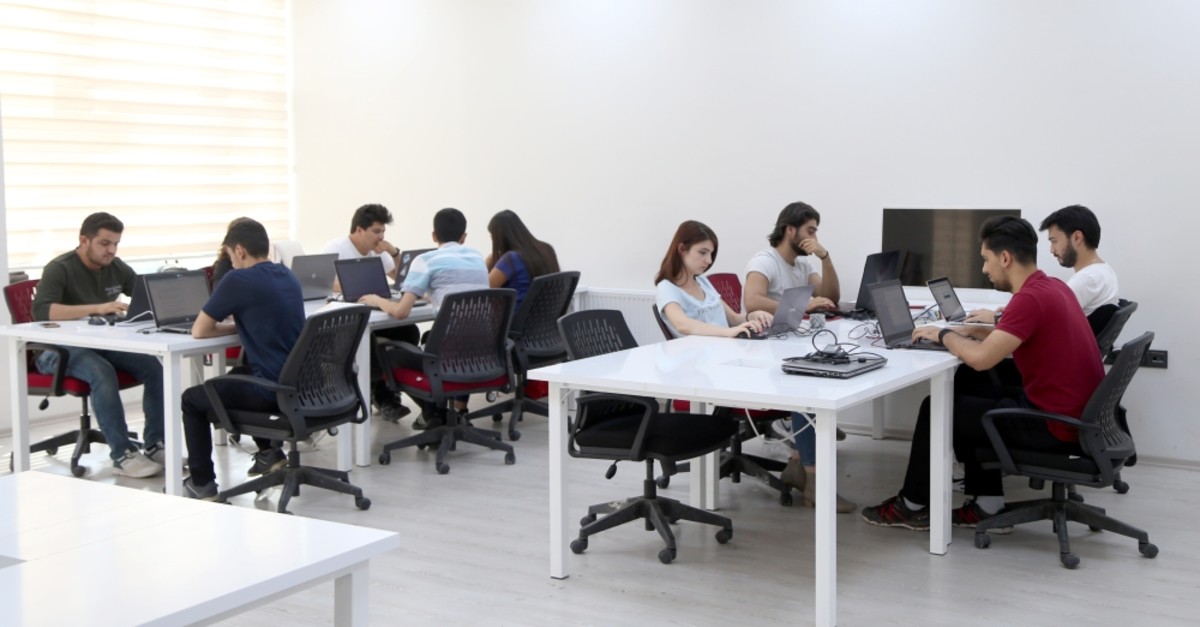 Young engineers working at Cumhuriyet University's technology innovation center in the Central Anatolian province of Sivas, developing software for local and international customers.
by Daily Sabah with AA Aug 30, 2019 12:15 am

Some 84 technology centers in Turkey are paving the way for young entrepreneurs, who want to create added value for the country's economy, and more technology and innovation centers in Anatolian provinces

Anatolian provinces, known for their moorlands or as tourist destinations, have begun to blossom as homes to technology startups at university-based technology innovation centers, or technoparks. Albeit a recent phenomenon, this development gained momentum after the introduction of the Law on the Technology Development Zones in 2001 and incentive programs designed for the unique needs to develop technoparks. Although a great portion of the 84 technoparks in 56 Turkish provinces cluster around universities in cities, primarily Istanbul and Ankara, other provinces have also seen promising developments as more technology companies and startups from technoparks create added value for the economy.

Currently, around 55,000 people are employed in all the technoparks, bringing together entrepreneurs, researchers and academics to support high-tech production.

As part of Turkey's national technology initiative, such centers, including technoparks, increase technology and innovation capabilities.

Technoparks generated $4.1 billion worth of exports since being established in 2001 through last July, Industry and Technology Minister Mustafa Varank said last week. Over 32,000 projects have been completed so far in technoparks, while 9,106 are ongoing. Some 41% of firms in technoparks work in computer programming, while the rest are active in several fields, including the natural sciences, biotechnology, manufacturing and energy.

One example of technoparks is Cumhuriyet University Technokent located in the central Anatolian province of Sivas, not known for technology startups so far, but famous for its moorland and hobbit houses that are spring attractions for tourists and its Kangal dogs.

The southeastern province of Gaziantep is known for gastro-tourism, a delight for local and foreign tourists. The city, which is also a base for manufacturers with a large organized industrial zone, is now home to startups that are opening to the world with innovative technologies, including software, biotechnology, electronics, artificial intelligence and machine vision.

Some 91 entrepreneurs work in the technopark, which has a 100% occupancy rate; 333 projects were completed in the first eight months of this year, and 159 projects are currently in process.

The technopark develops companies and expands the value-added economy, Ekrem Tekin, the head of Gaziantep Technopark, told AA: "By thinking globally, we think that our companies will reach a much better place. They will be able to find partners and take part in global networks for entrepreneurship and business management, which will lead our companies to gain international recognition."

He noted that some companies in the technopark have produced virtual reality mobile phone applications that have made it to the Editor's Pick section on the App Store and Google Play.

"However, many people still do not know that these applications have come out of Gaziantep Technopark," Tekin said, recalling that Watch-X was selected as an educational technology startup in England in 2018.

Tekin said young people could receive consultancy and investment at the technopark. "Young minds can dream here. They can hone their skills and work with innovative market leaders," he added.

Mehmet Çoban, who developed a device that detects faults in car parts, said his clients were increasing every day. "Our first customer was a giant German company," he said. Çoban said the device is sold in Turkey and exported to Israel, Oman, Saudi Arabia, Kosovo, Algeria and Lebanon.

The technopark in İzmir, the first research and development (R&D) and business center in the Aegean region, provided $60 million in export returns from its high-tech products.

Yusuf Baran, rector of the İYTE and head of Technopark İzmir, told AA that the center today hosts 154 R&D companies under its umbrella with a total turnover of TL 600 million.

"We are continuing our activities as a technopark where light in weight but heavy in value products are obtained with the acquisition of knowledge-based high technology," Baran said.

Since a vast majority of companies in the technopark were founded by İYTE academicians or undergraduate students, Baran said over half of them began their commercial life in the technology development area.

Baran stressed that the technopark continues training on branding and internationalization of high technology companies in the İzmir region as a part of a 3 million euro ($3.32 million) project recently funded by the EU.

To strengthen the technopark, the center has increased the number of full-time R&D personnel by 15% in the last eight months, Baran said. He added that the technopark aims to grow up to 35% by putting three new units into operation, and specializing in the defense, renewable energy systems and production fields.

Three new technology innovation centers are to be opened in western and southern Turkey to support high-tech production, an official said on Thursday.

"We plan to activate these centers by the end of 2020," Kadir Aydın, general manager of the Cukurova Technology Zone in southern Adana province, told AA yesterday. Both Turkish and Syrian investors will be able to benefit from the information, technology and consulting services of these centers, which will be funded by the European Union.

The Industry and Technology Ministry aims to raise the number of R&D centers across Turkey, Aydın said, adding that the latest centers to be opened in İzmir, Adana and Mersin would be "pilot projects" of "great importance" for the ministry. Entrepreneurs with innovative ideas will be able to use or employ the centers' facilities, as will factories that require a certain tool be developed. Companies may also demand new products or technologies for their own use from the centers, Aydın said.