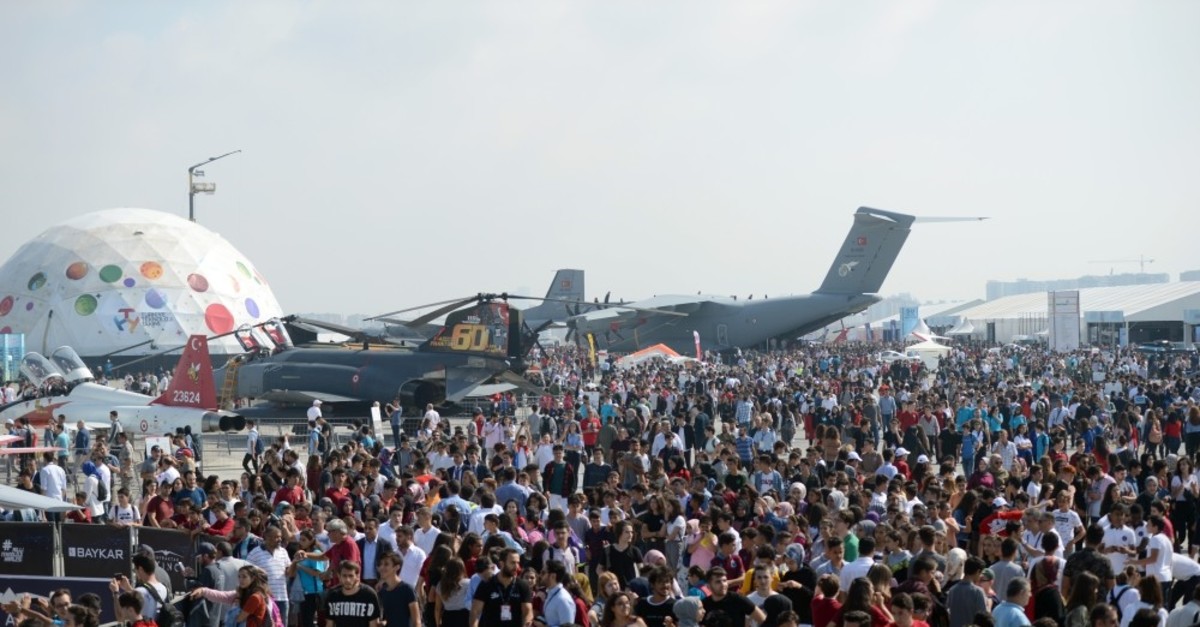 Thousands of tech enthusiasts Tuesday flocked to the now-closed Atatürk Airport to see in person what the ambitious Turkish aerospace and tech industry has to offer. Large crowds gathered at the opening day of the second edition of Teknofest Istanbul, Turkey's largest aerospace and technology event and the second-biggest aviation event in the world. Atatürk Airport is hosting the six-day festival, jointly organized by the Turkish Technology Team Foundation (T3) and the Industry and Technology Ministry.

From flying cars to new generation unmanned aerial vehicles (UAVs), from national combat aircraft to rockets, among which some will be showcased in public for the first time - aviation and technology enthusiasts will have the rare opportunity to examine the ground Turkish industry has covered on its path to becoming a tech-producing country.

"Produce ideas and, most importantly, invent. Never stop dreaming and chasing those dreams. As the Ministry of Industry and Technology, we are with you every step of the way, we are there to walk the road with you," said Industry and Technology Minister Mustafa Varank in his address at the opening ceremony, encouraging youth not to have qualms about becoming entrepreneurs.

"Events and exciting competitions to be held here widens Turkish youth's horizon and sets new goals for them," he said, underscoring that young people will design the cutting edge planes, smart cities and spacecraft in the future. Turkey has entered a new era with national technology moves, which seeks to increase the technology and innovation capability in the country, said the minister, noting that they want all 82 million citizens to embrace this initiative.

Having become one of the leading aerospace events in the world by hosting more than 550,000 visitors in its inaugural year, the event is expected to attract more than 1 million visitors this time around.

For his part, Selçuk Bayraktar, the chairman of T3 Foundation and the Chief Technology Officer of Baykar Makina, said at the opening ceremony that Teknofest is the venue for Turkey to display the developments in many areas that have been realized over the past year.

This year, 50,000 competitors from 122 countries will join contests in 19 fields during the event, he said.

The event is promising to give away around TL 3 million in prize money for young technology talents.

Within the scope of the grand festival, people from all age groups will take part in multiple contests for robotics, engine design, electric cars and more. Also, the festival will sponsor fun activities in science and technology, including simulation exercises, team games and aviation activities, in addition to educational activities for kids.

The event will also host numerous activities such as aviation shows, seminars, workshops, drone championship and concerts. The World Drone Cup, Take Off International Venture Summit, Hackİstanbul 2019, breathtaking air shows by Solo Türk and Turkish Stars, a vertical wind tunnel, planetarium, aviation shows, workshops and the Gendarmerie Safety Special Show will all be held within the scope of the festival. Among others, Turkey's T129 Advanced Attack and Tactical Reconnaissance Helicopters (ATAK) will be performing a popular "Harmandalı" dance.

It is also showcasing a number of national projects that have attracted a lot of local and international attention. The mock-up of the fifth-generation MMU was unveiled at this year's Paris Air Show.

The preliminary design activities of the fifth-generation fighter jet received a TL 4.8 billion incentive certificate. The project will employ 3,200 people, with an indirect employment contribution estimated to be around 11,200. The HÜRKUŞ training aircraft, also developed by TAI, will also perform demonstration flights at the festival. The event is also showcasing aircraft like the locally-developed T625 multi-purpose 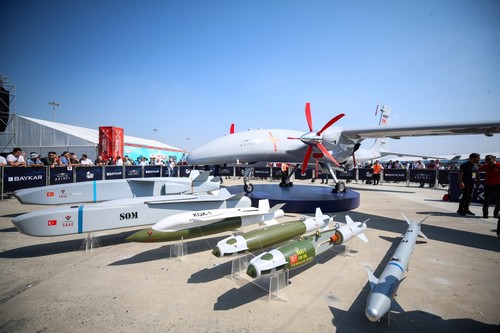 Baykar Makina's armed drone Akıncı is expected to perform its first test flight within this year.

Dubbed "the flying fish," the Akıncı drone is an important step for Baykar to accomplish their aim to upgrade unmanned aerial vehicle (UAV) technology.

The drone has just recently completed its first engine test and is expected to carry out its first test flight within this year. It is expected to officially start serving Turkish security forces in 2020. 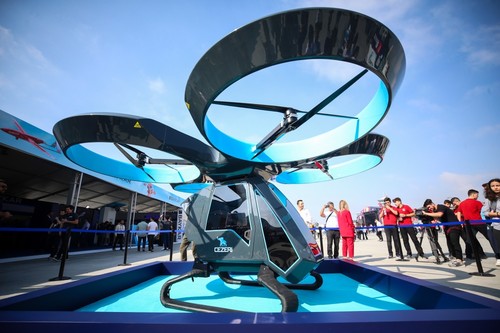 A prototype of Turkey's first flying car Cezeri is being showcased in public for the first time.

Cezeri can currently carry one person but its next version will have room for more, he told Anadolu Agency (AA). "We aim to make this prototype a vehicle that will be fully used in urban transportation," he said. Yağci also said Cezeri will have a one-hour-flying capacity.

The photos of the prototype's eight-month-long design process, from the initial sketches to its construction, were recently shared by Selçuk Bayraktar, the chief technology officer of Baykar. The car gets its name from Ismail al-Jazari, one of the great Muslim inventors and engineers of the Islamic Golden Age who lived during the 12th century in eastern Anatolia. Baykar, established in 1984, produces armed and non-armed drones, control systems, simulators, and avionics systems. 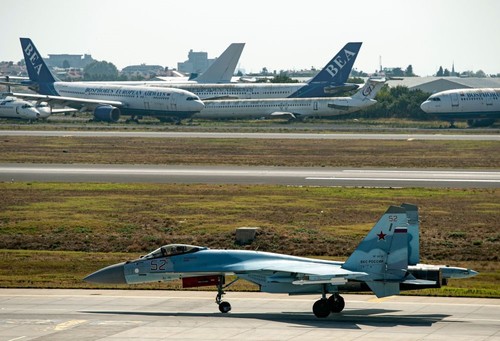 A Russian Sukhoi Su-35 fighter jet taxis on a runway during an air show at the Teknofest festival at Atatürk Airport, Istanbul, Sept. 17, 2019.

Russian jets are also meeting visitors at the aerospace and technology festival.

The medium-haul passenger aircraft MC-21 is making its debut aboard at Teknofest. The multirole fighter Su-35, the Su-57 fighter jet, the latest generation Russian stealth aircraft, the Beriev Be-200, a multipurpose amphibious aircraft, are all on display at the event. The Su-35 carried out flights on the sidelines of the event yesterday. In recent weeks Russian officials said Turkey was interested in securing deals to purchase aircraft from Russia.

In the wake of Turkey's suspension from the F-35 jet program by the U.S., Ankara has been mulling alternatives for its warplane needs. President Recep Tayyip Erdoğan visited Russia's MAKS-2019 air show late last month, where along with his Russian counterpart Vladimir Putin, he examined the Su-35 and Su-57 jets. 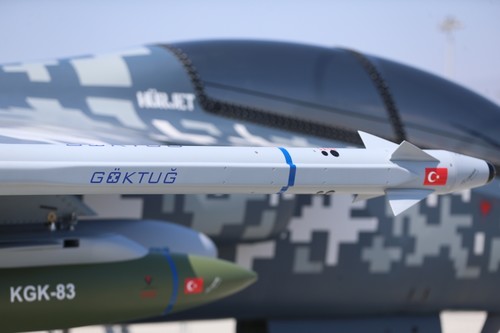 Developed in line with the needs of the Turkish Air Force by the Defense Industry Research and Development Institute (SAGE) of the Scientific and Technological Research Council of Turkey (TÜBİTAK), the missile is being displayed mounted beneath warplanes in the exhibition area at Atatürk Airport.

Göktuğ, mounted beneath the Hürjet, a jet training and light attack aircraft, has attracted great interest from visitors.

TÜBİTAK SAGE Manager Gürcan Okumuş recalled that Turkey will be one of the few countries in the world capable of building air-to-air missiles when the project is completed.

"These are air-to-air missiles used between aircraft. There are two variants of Göktuğ; in-sight and infra-sight. In fact, Göktuğ consists of two separate projects," Okumuş said.

Underlining that the project has significantly progressed, Okumuş continued: "Ballistic shots have been fired. At the end of this year, we will shoot again from the ground against the seeker flying targets. The final phase of the project, i.e., air-to-air tests, will be completed next year. When the tests of our project are completed at the end of 2020, mass production will be started by an appropriate institution to be selected by 2021."

Indicating that air-to-air missiles are used as defense missiles between aircraft, Okumuş said that the pilot can use it by seeing the enemy aircraft and against enemy targets that he detects with radar thanks to the in-sight and infra-sight features.

Touching on the aircraft in which Göktuğ will be used, Okumuş said: "Göktuğ is being developed for F-16 aircraft. When it goes into mass production, it will be used in the Hürjet, the Akıncı UAV (unmanned aerial vehicle) and our national combat aircraft. It will be used on very different platforms, helicopters and vehicles."