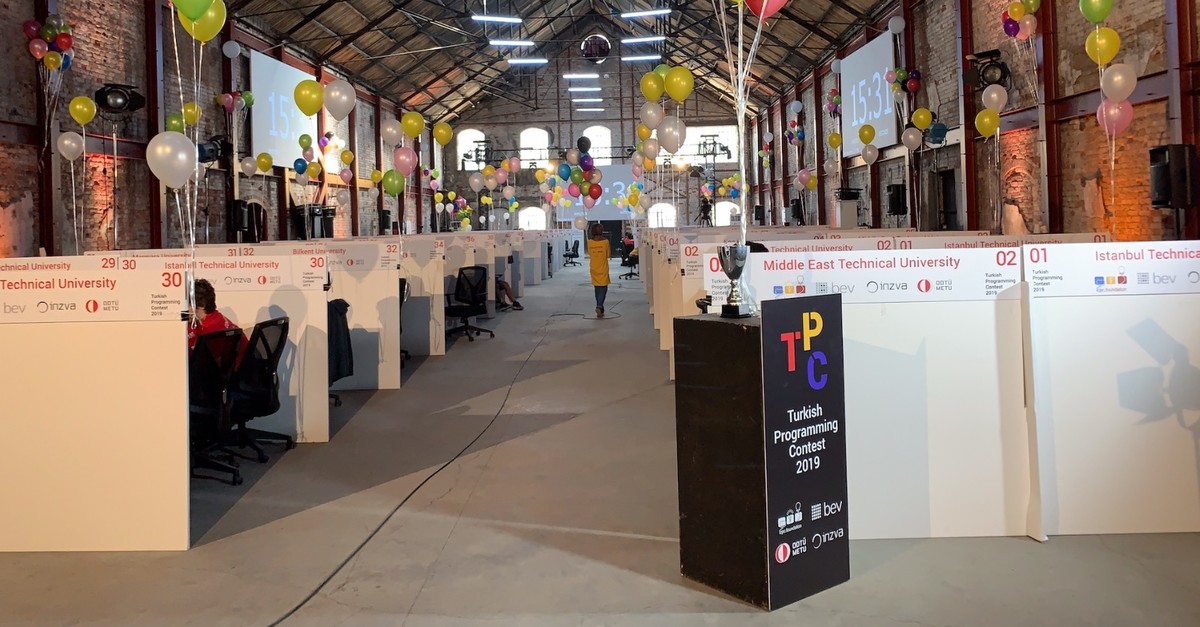 The balloons next to each team during the competition were used to represent the number of algorithms solved, not as ornaments. Each color was given to the teams to indicate the solution of a different algorithm.
by Timur Sırt Sep 21, 2019 1:39 am

Hundreds of young coders from 14 universities in Turkey exhibited their talents and competed at the 2019 Turkish Programming Contest, organized by inzva, a nonprofit community focused on AI and algorithm studies, for a chance to go to the regional finals in Europe

Young people capable of code writing will develop the technologies of the future. The Turkish Programming Contest, one of the most important organizations in our country on coding, regarded as the new language of the world, was held last week at Beykoz Kundura. The event brought together 152 young code writers from 14 universities. The winning teams of the contest, which aim to open up new horizons for young computer engineer candidates, will have the chance to participate in regional finals organized in Europe with the support of BEV (Birebir Eğitim Vakfı) Foundation for new achievements.

Some 54 teams competed to be in the top 10 in the contest which is of great importance to raise awareness about programming in our country. Moreover, a pleasant environment was created at the Beykoz Kundura Factory, a unique venue in Istanbul. Meanwhile, balloons were not used as ornaments, but this time they were hung to symbolize the success of the codes prepared by the teams.

The Turkish Programming Contest was organized by inzva, a nonprofit community focused on artificial intelligence (AI) and algorithm studies, in partnership with Middle East Technical University (ÖDTÜ) and under the auspicious of ICPC (International Collegiate Programming Contest) Foundation. Inzva is designing new activities to create more space for talents with high technical skills and emotional intelligence during university education.

The teams that ranked in the competition were qualified to compete in ICPC Southeast European Regional Finals, which will be held in Bucharest. The teams must be successful in regional finals to participate in the 2020 Moscow finals of ICPC, considered as the world's largest and most prestigious programming competition with more than 10,000 participants from 103 countries. ICPC is the oldest, largest and most prestigious programming competition in the world, encouraging creativity and teamwork in creating new software programs and enabling students to test their performance with limited time and resources.

Utku Yavuz, one of the founders of inzva, which wants to be the voice of computer engineers in Turkey, announced that they would continue to encourage algorithmic, analytical and productive thinking. Yavuz emphasized that the cooperation protocol with ICPC is very important for the future and stated that cooperation means new gates for the development of the software world ecosystem in our country and that their goal is to bring the ICPC World Finals to Istanbul in the long term. While Yıldırım Holding CEO Yüksel Yıldırım made the closing speech of the Turkish Programming Contest, the event's flag was given by professor Tolga Can, head of the ÖDTÜ Computer Engineering Department, to professor Tuna Tuğcu, head of the Boğaziçi Computer Engineering Department, for the competition in 2020.

Make room for your future in your suitcase

I had the chance to try the Pabbler application, which rents the vacant spaces of travelers' suitcases and make a donation by carrying baby food to a family in San Francisco.

One of the most popular activities in the world is to travel. Instagram and similar apps whip this passion. Over the last 50 years, the obstacles to travel have been lifted. Startups are now discovering methods to overcome ticket fares. Pabbler, a member of Türk Telekom startup acceleration program, aims to be a transparent suitcase for travelers.

Pabbler is a logistic platform that allows the e-commerce sites to deliver products that they want to send or return to abroad by renting space in travelers' suitcases. Pabbler allows e-commerce sites to deliver their products in short delivery times, enabling travelers to make some money in the meantime. It is a great way to cover the expenses of students' trips in particular. It creates a unique opportunity for travelers who want to see different places.

I tried Pabbler during my San Francisco – Istanbul trip. With the support of Ceren Süngü Kalpaklıoğlu, the founder of Pabbler, I entered the dimensions of my load and travel details. You can operate from a simple web-based interface. In order not to get you into trouble, they send information according to the rules of each shipment in the respective country. It was a pleasure for me to have the chance to bring the food that a family ordered for their baby. I chose to use the fee paid for the space I allocated in my suitcase for Tema Foundation. Students, on the other hand, can use this to finance their travels.

At the Demo Day event in Istanbul, nine startups from Turkey, the Netherlands, the U.S., Jordan, Palestine, India, Kenya, and Rwanda had the opportunity to explain their solutions regarding access to livelihoods, digital identity, portable water, and sanitation.

During the event, nine startups from eight different countries participating in the SDG Impact Accelerator program shared their solution projects for refugees such as digital identity and portable sanitation systems. Two of the startups, change: WATER LABS and Gravity.Earth-Sertifier-Mark Labs consortium gained the opportunity to participate in the side event organized by Turkey and UNDP during the United Nations General Assembly SDG Summit on Sept. 23-25 in New York. Nine startups from Turkey, the Netherlands, the U.S., Jordan, Palestine, India, Kenya, and Rwanda presented their products developed during the three-month accelerator program to an elite audience of potential public and private partners as well as international impact investors. Four teams focused on solutions for refugees on access to livelihoods and digital identity and five on portable water and sanitation.

"By bringing entrepreneurs from all corners of the world that develop humanitarian solutions for refugees for an intense program to work with their users and partners in Turkey, SDG Impact Accelerator has set a global model for concrete projects to progress towards achieving SDGs," he added.

"As the UNDP, we focus on supporting disadvantaged people with the mission of not leaving anyone behind," Seher Arıner, UNDP Turkey Assistant Resident Representative (Program), stated. "We need to work together to achieve Sustainable Development Goals by 2030. Therefore, we think that this initiative bringing all of us together is very valuable on the way to achieving Global Goals. As UNDP, we are ready to continue giving all the support we can to the teams to make their impact greater. This is what we aim to achieve with the new vision of UNDP, which we call NextGenerationUNDP."

Through this program, Turkey has provided an environment where entrepreneurs' creativity and technology opportunities are tested with solutions to contribute to meeting the needs of refugees. In the long run, the goal is to share this acceleration model with countries experiencing the same challenges and to help some 70 million displaced people worldwide. 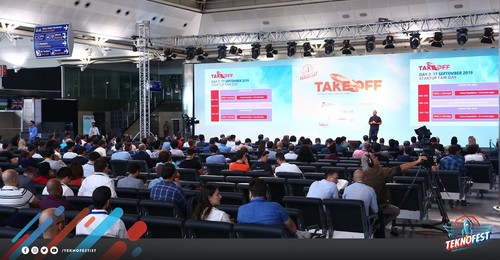 Domestic and international tech startups presented their products to companies and investors at the Take Off Istanbul International Startup Summit.

Giant technology companies including Google, Microsoft and Samsung introduced their services and organized various events throughout Teknofest Istanbul, Turkey's largest aerospace and technology event and the second-biggest aviation event in the world.

At the Take Off Istanbul International Startup Summit, strong international startups, investors, mentors and corporate firms came together. The startup-focused events ended on Thursday. At the summit, both domestic and international technology startups took the opportunity to present their products and services to companies and investors engaged in technology. The giant IT companies, including Google, Microsoft and Samsung, met with visitors at the grand event.

Google contributed to the Take Off Istanbul International Startup Summit organized within the scope of the event, informing the Teknofest participants about the Google Digital Workshop service designed to be successful in the digital world through the events it organized at its booth and introducing the Google Developers program for those interested in coding. The U.S. technology giant Microsoft also provided coding training to children in collaboration with the Habitat Association. In the training given through the popular video game "Minecraft," the features and importance of algorithm in coding were explained through the web-based interface. Children who successfully completed the coding training were given a certificate. Arda Yalçın (13) stated that he reinforced the basic coding knowledge he had taken in the IT course with this activity.

No computer can invent a human

In the artificial intelligence event held in China, Chinese Alibaba's founder Jack Ma and Tesla and SpaceX's founder Elon Musk took the stage. The debates of the duo attracted considerable attention both in the traditional and social media.

Elon Musk said that computers would be smarter than people and that the gap was gradually closing, stressing the inevitable superiority of computers over people by giving examples from Chess and Go games played between people and computers. Jack Ma, on the other hand, pointed out the difference between being clever and being smart and emphasized that humans would continue to be smarter. "We, humans, invented the computer. I have never seen a computer invent a human being," Ma underlined.