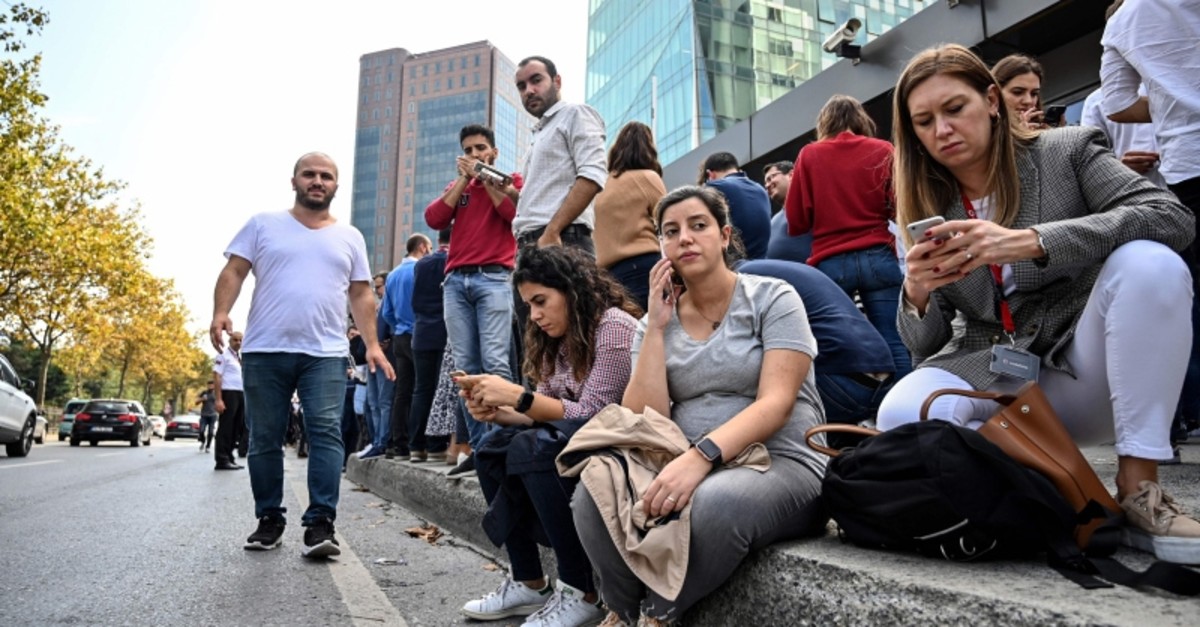 Office workers speak on their phones after fleeing their buildings in the Maslak District of Istanbul on Sept. 26, 2019, after an earthquake struck the city. (AFP Photo)
by Daily Sabah Sep 29, 2019 7:37 pm

The three GSM operators in Turkey are planning to establish a common line that will be protected against earthquakes, Vice President Fuat Oktay said Sunday, three days after a 5.8 magnitude earthquake shook Istanbul and the surrounding region.

Normally, about 20 million people are making calls at a time. However, following the earthquake, that number skyrocketed to 160 million, causing service to temporarily collapse, Oktay said, citing the GSM operators.

In order not to experience this problem again, the government along with Türkcell, Vodafone and Turk Telekom made a number of decisions to improve operability during earthquakes.

The current capacity of the three operators is 118 million. These companies will work together to increase the capacity to 175 million within six months, Oktay said.

A free line will also be establish, possibly coordinated by Turkey's Disaster and Emergency Management Authority (AFAD). During an earthquake, only this line will be in use, Oktay said, adding that this line will hopefully be established in six months.

Cell stations on buildings at risk for earthquake damage will be relocated to secure buildings, he noted.

The 5.8 magnitude earthquake struck Thursday off the coast of Silivri, a district on the far western side of Istanbul. It was followed by countless aftershocks and another major temblor at 11:20 p.m., though weaker in magnitude than the first one that occurred at 1:59 p.m.

While no lives were lost in the earthquake, several injuries were reported and dozens of buildings sustained infrastructural damage. The incident drew renewed attention to the ever-present need for earthquake preparedness.

Turkey is among the world's most seismically active countries as it is situated on several active fault lines, and dozens of minor earthquakes and aftershocks occur daily. The most potentially devastating fault line is the North Anatolian fault line (NAF), where the Anatolian and Eurasian plates meet. A strike-slip fault that formed as the Anatolian plate was being pushed northwestwards by the Arabian plate, the NAF has produced devastating earthquakes throughout history.

In the early hours of Aug. 17, 1999, more than 17,000 people were killed and over 43,000 injured when a magnitude 7.4 quake rocked the Marmara region for 37 seconds, with its epicenter located in Gölcük province, some 75 kilometers southeast of the Bosporus. Three months later, on Nov. 12, 1999, 845 people were killed and nearly 5,000 injured when a magnitude 7.0 earthquake hit Düzce province, about 120 kilometers northeast of Gölcük.