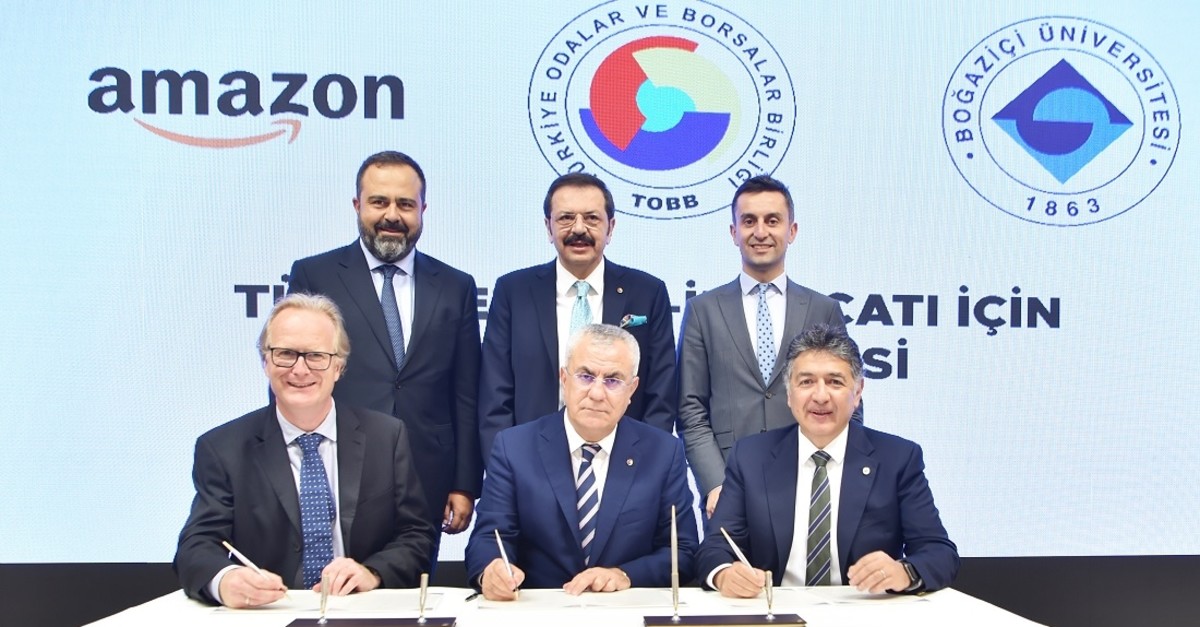 Amazon Turkey officials sign partnership with the Union of Chambers and Commodity Exchanges of Turkey (TOBB) and Bou011faziu00e7i University to offer e-commerce training to SMEs, on Sept. 16, 2019, in Ankara. (TOBB photo)
by Daily Sabah Sep 30, 2019 11:48 am

One year after launching operations in Turkey, Amazon.com.tr is dreaming big for Turkish sellers and planning for long-term investment in the country.

Amazon, the world's largest e-commerce platform, entered the Turkish market last year. With Boğaziçi University, it has now initiated a new training program for small and medium-sized enterprises (SMEs), to help them increase exports to Europe.

Amazon executives told a group of reporters at Boğaziçi that the company has a seven-year investment road map for Turkey, investing "tens of millions of dollars" in its first year.

Amazon began exporting products from Turkey to Europe in June, opening the door for Turkish SMEs to sell products in dozens of categories to customers in 28 countries across Europe, including the U.K. and Germany.

To help SMEs take advantage of that open door, Amazon Turkey is partnering with the Union of Chambers and Commodity Exchanges of Turkey (TOBB) and Boğaziçi University to offer e-commerce training to SMEs in Turkey.

Amazon Turkey aims to provide 40 training seminars in 20 provinces of Turkey, reaching 2,000 SMEs. Boğaziçi University Lifelong Education Center experts will give the trainings in commerce and industry centers affiliated with TOBB. The trainings will cover topics such as digitalization, opportunities for e-export, ways of expanding business with exports, and sales opportunities offered by Amazon.

"Our SMEs will win and Turkey will increase its business potential," he said, adding that cooperation model could become widespread.

Özkan defined Turkey as an exciting market, as well as a serious production and export base.

"We have launched cooperation with Amazon for an important project where these features of Turkey are evaluated together. This approach of Amazon, which will contribute to Turkey's exports and provide opportunities for small businesses wishing to expand abroad, is very significant," he was quoted as saying by the Turkish daily Hürriyet.

"This is a very critical window of opportunity for Europe for young entrepreneurs, small craftsmen selling their hand-made products, and SMEs doing larger business hoping to expand abroad," he added.

Amazon Europe Vice President Xavier Garambois, who has worked at Amazon for 17 years, said that SMEs can be very successful in design and production but struggle with distribution. Amazon's strength, conversely, is a customer base all over Europe.

"We have to put these two together," he said.

Garambois said that is not an easy task, which is why Boğaziçi's support is critical.

"This program will be very successful," Garambois said. He explained that SMEs who want to sell their products through Amazon will be included in the training program, which will increase knowledge, experience and confidence. The SMEs who wish to participate in the training will be announced soon, he noted.

According to a report by the Organization for Economic Co-operation and Development (OECD), in Turkey, SMEs account for more than 99% of all businesses, 73% of employment, 53% of added value, 55% of total investments and 55% of exports.

Recalling that in the first place, they did not make very aggressive publicity and that they want to achieve a patient and solid growth, Garambois said they are very pleased with their experience in Turkey, adding the market is far ahead of expectations in terms of distribution.

Stressing that customers who remain satisfied with the service recommend them to their friends, thus ensuring a very solid growth, Garambois said while working in Germany, England and France, he had to devote one-fourth of his working hours to delivery, but in Turkey, they encountered a very nice, positive surprise.

"We carry out a very successful operation with Ceva Logistics in storage," he continued. "In cooperation with Ekol Logistics, we achieved very good performance with a very advanced system in delivery. The quality and speed of all the operators we cooperate with are very high. I did not expect that much, the backbone of our operation is going very well," he added.

"We invested tens of millions of dollars in the first year," Garambois noted.

"Companies usually made a two-to-three year plan, looking to the future. For Turkey, we prepared a seven-year plan. We are here for a long-term investment. We are very patient," he explained.

When asked if Amazon plans to establish a data center in Turkey, Garambois said the company currently has a cloud computing team in Istanbul.

Amazon.com.tr eventually plans to begin selling its virtual assistant Alexa and similar projects, but there is no set date, Garambois said.

Jeff Bezos – currently one of the richest man in the world – founded Amazon in 1994 as an online bookstore, and made it the biggest Internet retailer in the world in revenue and market value in 24 years.