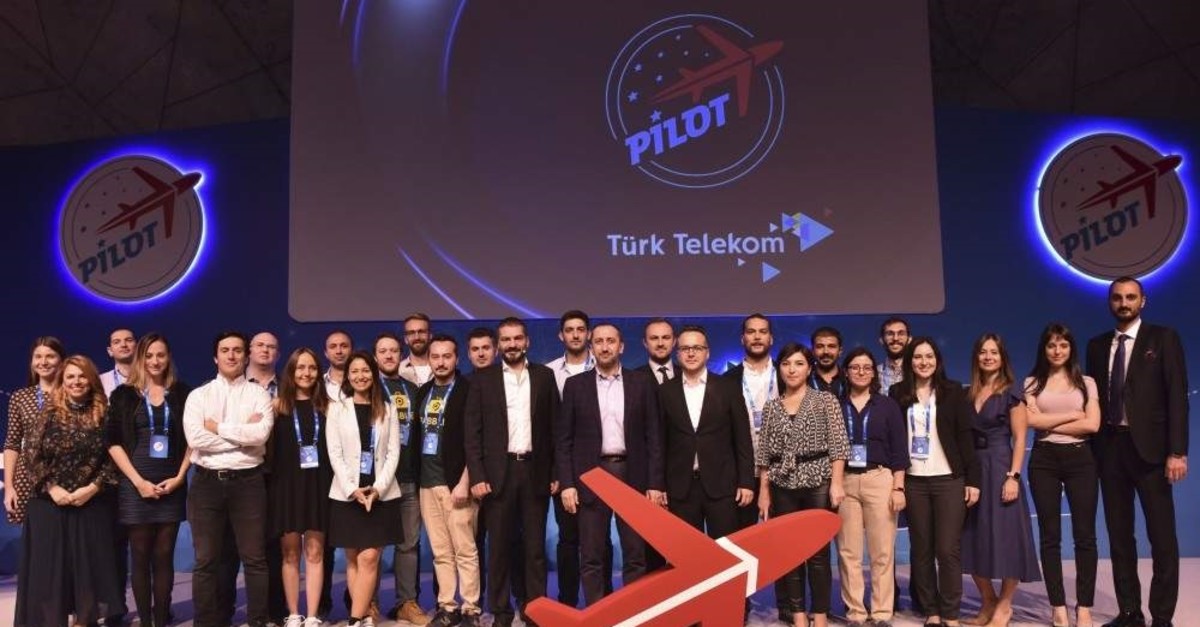 Nine startups that graduated from PİLOT, one of Turkey's first acceleration programs that has to date provided startups with over TL 4 million in investments, took the stage to showcase their projects and business models to investors

The nine entrepreneurs, supported by Türk Telekom under PİLOT, Turkey's first corporate startup acceleration program, had a chance to exhibit their projects and business models at the event, which was attended by prominent names of the entrepreneurial ecosystem, entrepreneurs and top management of Türk Telekom.

Participants showed great interest in the event, where the 7th term graduates of PİLOT used the opportunity to showcase their projects.

The featured startups, AppNava, B2Metric AI, Blok-Z, Efilli, Monday Hero, Pabbler, Piple, Robomotion and Shopi, are all technology-oriented startups that develop applications in different areas, including artificial intelligence (AI), blockchain, e-commerce, personnel management, and robot software. These startups successfully completed the PİLOT acceleration program and each received TL 125,000 in cash support. They also had the opportunity to introduce their business models and solutions to investors.

The startups applying to PİLOT are evaluated in different criteria, including cooperation potential, innovation, the applicability of the idea, size and growth potential of the target market, consistency of the business model and competence of the team. The program mainly focuses on technology startups.

Over TL 4 million investment in 65 startups

To date, PİLOT has invested over TL 4 million in startups. So far, 65 startups have graduated from the program. In total, they employed 280 people last year, generating a turnover of TL 24 million. Seventeen of the graduates had the opportunity to further develop their projects and ideas through investment.

Robots to have more sensitive touch than humans

Sensobright, founded by the Turkish scientist Utku Büyükşahin, who undersigned an invention with the vision of giving robots a more sensitive sense of touch than humans, is facing the global business world with the support of the investment company Inventram. We are not far from a future of robots that have a more sensitive touch than humans. Sensobright, which acquired a patent for the Turkish scientist’s invention, which gives the robots a sense of touch, and came to the investment stage, takes the first steps toward growth. Inventram, Koç Holding's technology investment company operating under the partnership of Japanese Mitsui Group and Koç University, is gearing up to bring Sensobright to global markets through investment. This technology makes it possible for robots to feel like human beings. Inventram, on the other hand, turned this early-stage investment into a long-term technology, enabling the project to be patented worldwide and move to the investment phase.

Speaking at the press conference introducing this technology Koç Holding Tourism, Food and Retail Group President Tamer Haşimoğlu said, “At this point, I would like to express with pride that Inventram is today the investment address of a high-tech idea or even a groundbreaking technology in the world. Many innovative technologies are forgotten in laboratories before they can move to the commercial stage due to long investment periods and high risk," he said adding they have undertaken the responsibility for it. Stressing that this technology, which has also attracted NASA's attention, is the first of its kind in the world by giving robots a sense of touch above human sensitivity, Haşimoğlu said this technology was realized with an investment of $5.2 million and will provide groundbreaking innovations in many sectors such as healthcare, defense and automotive.

Inventram General Manager Cem Soysal said that Inventram is a strategic investment company. “We are a high-energy company pursuing technologies that will change the rule of the game and leave a mark in the world in our investments. From this perspective, our ability to patent a technology under our radar and turn it into a company investment is the most important feature that makes us strong,” Soysal said, highlighting that they see patents as rival entry barriers. “Esteemed scientist Utku Büyükşahin made various improvements on this invention for six years, and finally we have patented the sense of touch, which is one of the five senses of humans. We are talking about a technology that is above human touch, and we have ensured that it is protected worldwide,” he added. He pointed out that they are committed to exporting the technologies developed in Turkey to the world. “As Inventram, we proved that we do not only invest in technologies, that we target foreign markets by converting them to products and services, and that we especially care about the United States, Europe, and Far East markets. Then we will have other investments to take this technology to all continents,” Soysal noted.

Büyükşahin, who is Sensobright's chairman and CTO, stated that they can go thousands of times higher than human touch resolution and that this technology is considered an important development by NASA engineers. “The nerve cell density at the fingertip, which is the most intense in human touch nerves, is 241 per square centimeter. Thanks to the present invention, we are now able to increase the sensors at the fingertips of the robots to 256 and over in square centimeters,” Büyükşahin said. “In addition to touching, we have also provided the perception of temperature and even the approach before touching, which means that with Sensobright, robots and machines can now have a more precise touch than humans. As a result of many studies conducted around the world, human touch resolution could not be approached, but we were able to reach thousands of times higher resolution than human touch with our patented technology, which is not affected by disturbances such as a magnetic field.”
Useful in all areas
He stated that this technology can be used in many fields in addition to giving robots a sense of touch. “This technology, which we call 'Artificial Skin with a Sense of Touch,' can be used in many fields as well as giving robots a sense of touch. For example, robots will be able to work with this technology wherever high-precision detection is needed, such as surgical applications, surgical instruments, surgical robots in medical applications, autonomous vehicles in traffic, minesweeping robots, and search and rescue from debris,” he further stressed. "At this point, we can perceive the approach before touching. When we cover the hand of a robot, we can create a three-dimensional scan of the object pointed by the hand and create the data ready for production. We can instantly create a three-dimensional map of the environment of a vehicle, giving a sense of touch to the operating robots thousands of times higher than a surgeon's resolution. We have found a product like teflon, it needs to be shaped according to the area of usage. If necessary, we will make the first prototype specific to that application together with the customer, show how to do it, and license the patent."

The majority of the Banks today are preparing their organizational structure for future digital transformation, much like technology startups. While transforming business processes using new technologies, they also solve the need for human resources (HR) with data scientists.

The number of customers making digital transactions in banks has long passed the figures of physical branches. Now, every bank is trying to integrate the data-driven business model into its business processes. İş Bank Deputy General Manager Burak Seyrek recently shared the digital transformation story for İş Bank's organizational models and HR practices. In a press conference at İş Bank headquarters, Seyrek talked about the effects digitalization had on business processes and HR practices. He then highlighted the bank’s efforts in this area. “Twenty years ago, the share of digital channels was at 15% and more than 3.5 million customers taking services at our branches. That rate has now exceeded 90% while 3 million customers are still visiting our physical branches,” Seyrek said. He underlined that the striking figures show that every new customer is benefiting from digital services to a great extent.

He added that technological developments have changed the language in the banking sector. "The noteworthy changes include concepts such as Industry 4.0, Banking 5.0, artificial intelligence (AI), agile applications, Big Data and Blockchain," he said.

“The banking sector will evolve from classic paper and operation-based banking to more face-to-face banking that focuses on customer needs and experience,” Seyrek said. “İş Bank's digital transaction rate has exceeded 90%. At the end of September, İşCep's share alone reached 58%, while ATMs’ share stands at 16% and the branches' share in the banking transactions at below 10%. Around 3 million customers continue to visit our branches every month. Face-to-face contact in the banking or service sector and human-oriented contact will continue.”

He said İş Bank is currently involved in Agile Management model in four areas, namely business banking, AI, operations center and retail banking, Seyrek noted that approximately 250 employees from different branches, including information technologies and complementary technical business disciplines, work in these four workshops. He added that they plan to launch 15 more areas into this working environment for up to one and a half years.

Seyrek stressed that they launched the “Reality at İş” and “İşGame” digital learning applications in the field of education. With these applications, they hoped to win two gold awards at the Brandon Hall Human Capital Management (HCM) Excellence Awards, one of the leading international award programs.
Growth-oriented startups meet business world
The ScaleUp Summit, which will bring together senior executives from different countries and growth-oriented entrepreneurs, will be held in Istanbul on Oct. 21. Endeavor Turkey, one of the most established companies focusing on entrepreneurship in Turkey, brings together senior executives and growth-oriented entrepreneurs with world-renowned achievements at the event. The ScaleUp Summit event opens its doors to entrepreneurs, who want to be informed on a global level about issues that need to be considered during the growth phase and the challenges that come to the fore, and business representatives interested in entrepreneurial ecosystems.
Role models that inspire
At the ScaleUp Summit event, entrepreneurs and mentors within the network of Endeavor operating in more than 30 countries will address issues for companies in the growth stage. Business leaders and entrepreneurs from Kenya, Brazil, Italy, the United States, Spain and many other countries will present different perspectives to summit participants. The event will start with the “With a Little Help From My Customers” panel held by Rina Onur from 500 Startups and Steve Boehm, a former executive at eBay. At the ScaleUp Summit, Hans Morris, who stands out with his experience in institutions such as Citigroup and Visa, and Endeavor Global CEO Adrian Garcia-Aranyos will discuss the common points of successful companies. Keynote speaker Ferish Patel, on the other hand, will discuss the legal processes in acquisitions. Paolo Bonomo, one of Italy's most famous angel investors, will take the stage with Eric Santos, one of Brazil's leading entrepreneurs, and Peter Njonjo, former CEO of Coca Cola West Africa, at the "The World is Our Oyster" panel moderated by Allen Taylor from Endeavor Catalyst. In another noteworthy session of the summit, Mynet CEO and Endeavor Turkey Chairman Emre Kurttepeli will discuss the entrepreneurial spirit and the pioneering startups of Istanbul with Firat İşbecer, Commencis CEO and Endeavor Turkey board member.