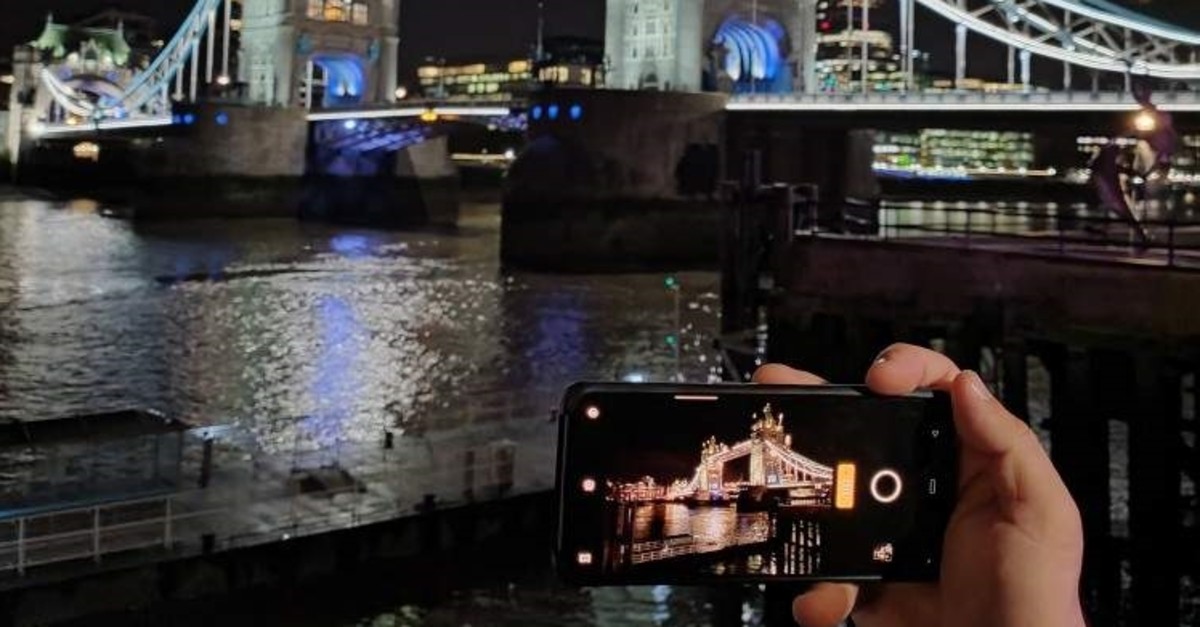 The new multi-cameras, spearheaded by Chinese phone manufacturers, capture videos and photos in remote, close, wide-angle or low light at night according to the user's needs

After the daylong rain in London, we started taking pictures without a tripod of Tower Bridge on the banks of the Thames on a fall night. It is not easy to take sharp pictures without using a tripod at night. However, following an unusual event of Chinese smartphone-maker Oppo in London, we tried out the new devices of the Reno2 series by the river at night. All brands have been designing areas of experience in their stores since they realized that smartphones should not be tested but experienced. Promotional meetings have also begun to turn into areas of experience and participatory events. We had the chance to photograph Oppo Reno2's night mode experience with another Oppo Reno2. You have already seen the result.

As the user’s choice of smartphone has become determined by its photographic and video capabilities, manufacturers that make advances in these cameras have begun to come to the forefront. Phones are now reshaped by technologies such as multiple cameras and artificial intelligence (AI). We are now talking about smartphones equipped with cameras, rather than the cameras on smartphones. Every phone manufacturer is developing new designs for their new flagship phones with multiple cameras on the rear and a front camera hidden in the housing. Today, a single photo frame is not enough to tell the whole story. That is why people are shooting more videos than ever to share their moments with friends, family and the world. Following the Samsung Note 10 series using the multi-camera on its flagship phones, the iPhone 11 series and the Huawei Mate 30 series finding their way to the market, the Oppo Reno2 series is striving to make a robust breakout. In fact, the Huawei crisis seems to have served the other Chinese Android phone manufacturers rather than Apple's iPhone.

These self-confident smartphones take professional photos and video footage at night. The Reno2 Ultra Night Mode offers a range of different night scenes through a powerful NPU and fine-tuned algorithms. With hardware-optimized AI-backed noise reduction, photos can go beyond what can be seen with the naked eye. With the new Reno2 series, as we experienced on the banks of the Thames, users can now capture impressive scenes such as fireworks or candlelit dinners in perfect clarity.

One of the leading features of the camera is the SOLOOP video editing solution that seems to cheer up your Instagram and Facebook stories. Oppo offers a video and sharing editor called SOLOOP to further enhance the video experience with the Reno2 series. The SOLOOP feature allows users to edit their visual content efficiently and professionally. Users can create their own masterpieces in a minute by adding music to match the timing and transitions of the shots. Reno2 also offers solutions for the characters and scenes in the video archive which intelligently organize album content.

Oppo's innovations in the Reno2 series are not limited to video technologies. At the same time, the following new modes have been added to the camera setup. The Ultra Night Mode allows users to capture clear night scenes even when the ambient brightness is less than 1 lux. It takes only 2-2.5 seconds to capture a dark scene, which makes the Reno2 one of the fastest night-shooting models in the industry. The new series provides a field of view of 119 degrees (Reno2 Z) or 116 degrees (Reno2). Like all motion-oriented cameras designed for a specific purpose, the Reno2 series offers the perfect solution for taking large landscape photos or videos.

The phones allow you to quickly and easily shoot an object from a distance of 2.5 cm, capturing details that the eye cannot see in both photos and videos. The adjustable Bokeh HDR mode features two new portrait effects that allow users to capture seven different portraits. The new Bokeh effect stands out as a first in the industry.

The Reno2 Z features a 16 MP pop-up camera with atmospheric light, while Reno2's camera supports ultra-clear backlit shots and a completely new Artificial Intelligence Beautification Mode.
XAOMI'S REDMI NOTE 8 PRO FEATURES 4 CAMERAS
Chinese phone maker Xaomi has introduced four models, led by the Redmi Note 8 Pro, expected to fall within the price range and performance preferred by young customers. Combining four cameras, the Redmi Note 8 Pro can produce images of up to 3.26 meters, meaning giant posters. It uses a 4-in-1 Super Pixel to capture more light for bright night shots.
The 8 megapixel (MP), ultra-wide-angle camera with a 120-degree field of view, 2 MP macro camera and 2 MP depth sensor combine to form Redmi’s versatile camera. The built-in artificial intelligence (AI) technology of the 20 MP front camera on the Redmi Note 8 Pro aims to take the front camera experience one step further with detailed portrait selfies, scene detection and facial recognition unlock. Equipped with a large 6.53-inch full HD + Dot Drop display and rear fingerprint sensor, the device has a screen-body ratio of 91.4%.
The display also has TÜV Rheinland certification to protect against blue light and reduce the possibility of visual fatigue. Redmi Note 8 Pro's glossy frame and precise G3 curvature provide a comfortable grip, while the three elegant color options are available in mineral gray, pearl white and forest green. The Redmi Note 8 Pro has a battery capacity of 4,500 mAh, well above average, enabling the device to stay active during games and video shooting. This is the highest power capacity of the Redmi Note series to date. It also has a number of other special features, such as power-saving mode and intelligent brightness adjustment, to help users maximize battery capacity.