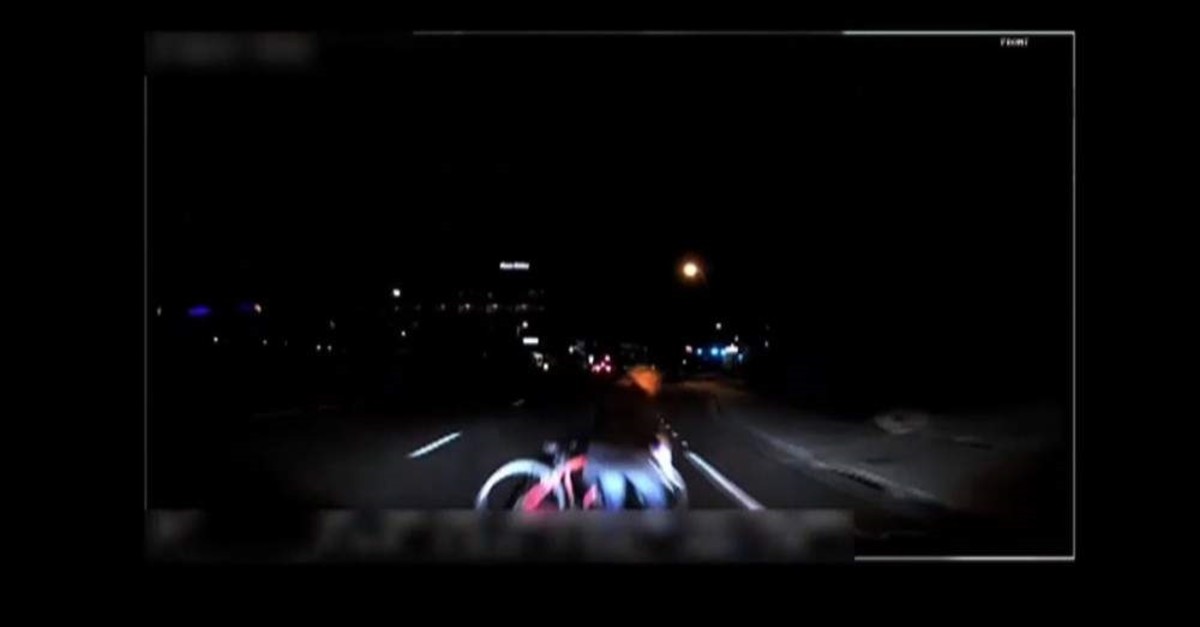 This video grab made from dashcam footage, released by the Tempe Police Department on March 21, 2018 shows the moment before the collision of Uber's self-driving vehicle and a pedestrian in Tempe, Ariz., March 18, 2018. (AFP/Tempe Police Department)
by Compiled from Wire Services Nov 06, 2019 10:16 am

An Uber self-driving car that struck and killed a woman last year in Arizona failed to recognize her as a pedestrian because she was jaywalking, U.S. transport regulators said Tuesday.
The woman had been crossing the street "at a location without a crosswalk; the system design did not include a consideration for jaywalking pedestrians," the U.S. National Transportation Safety Board (NTSB) said in a statement.
In a preliminary report, the NTSB had already determined that the car's software spotted the 49-year-old woman nearly six seconds before the vehicle hit her, as she walked across the street at night with her bicycle in Tempe, a suburb of Phoenix.
According to the latest report, which was issued ahead of a Nov. 19 hearing to officially determine the accident's cause, the system at no time "classified her as a pedestrian" but rather, considered her an object. When the software determined that a collision was imminent approximately 1.2 seconds before impact, it suppressed any "extreme braking or steering actions" to reduce the potential for erratic vehicle behavior.
It did, however, produce "an auditory alert to the vehicle operator as it initiated a plan for the vehicle slowdown."
Following the March 2018 accident, Uber suspended its autonomous driving testing in all locations in the U.S. but resumed the program several months later. The company has assured the NTSB that new technology in the cars will correctly recognize pedestrians in similar situations and trigger braking more than four seconds before impact.
According to the report, Uber's autonomous test vehicles were involved in dozens of crashes in the 18 months before the fatal March 2018 incident.
The board said between September 2016 and March 2018, there were 37 crashes of Uber vehicles in autonomous mode at the time, including 33 that involved another vehicle striking test vehicles.
In one incident, the test vehicle struck a bent bicycle lane bollard that partially occupied the test vehicle’s lane of travel. In another incident, the operator took control to avoid a rapidly approaching oncoming vehicle that entered its lane of travel. The vehicle operator steered away and struck a parked car.
Last Update: Dec 20, 2019 1:29 am
RELATED TOPICS