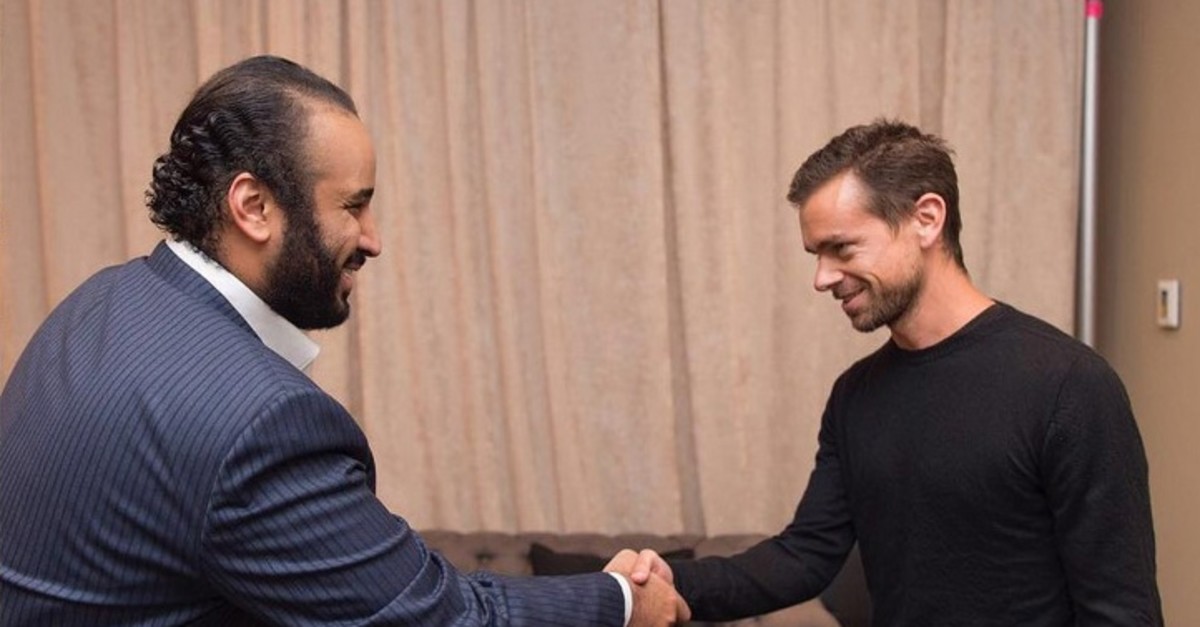 U.S. prosecutors filed a complaint that was unsealed this week alleging that the Saudi government recruited two Twitter employees to look up the private data of thousands of Twitter accounts, including those of their critics.

One of these alleged spies was Ali Alzabarah, a Saudi citizen and engineer for Twitter who was discovered to have been accessing users’ personal data in December 2015.

Twitter warned a few dozen of its users a week later that they “may have been targeted by state-sponsored actors.”

Just six months later in June 2016, Dorsey met with MBS in New York to discuss cooperation to “train and qualify Saudi cadres,” according to the Middle East Eye (MEE). Photos of their meeting were posted online by Bader al-Asaker, the head of MBS’ private office and the Saudi official suspected of overseeing the data-collection effort inside Twitter.

Bin Salman, who became the kingdom’s de facto leader in 2017, has led a crackdown on dissidents and human rights activists, especially those voicing their thoughts online. The kingdom has also poured significant investment into Twitter in recent years.

The meeting between Dorsey and MBS just months after the security breach has raised questions as to what the CEO of Twitter knew about the infiltration at the time.

“The thing that strikes me is when you look through the government’s complaint, this guy hacked 5,500 records in June. That’s not a small number,” said an attorney representing Omar Abdulaziz, a Saudi dissident who was targeted in the data leaking.

“It raises the question about what Twitter did and did not want to know,” Mark Kleiman told MEE.

Kleiman said that Azabarah was put on administrative leave in December 2015 after one of the U.S. intelligence agencies tipped off of Twitter about his seven-month spying spree.

“It’s hard to imagine that (Dorsey) wouldn’t have heard about it six months later,” he told MEE.

It is “highly unlikely” that Dorsey didn’t know about the state-sponsored breach, according to Marc Owen Jones, an assistant professor at Hamad bin Khalifa University in Qatar and social media analyst.

“The severity of the charge and the need for discussions around security and privacy at a high level would certainly have made it a top item on any agenda. Indeed, if Dorsey was not made aware of the issue, then Twitter’s competence as a tech company should be brought further into question,” Jones told MEE.

Twitter declined to answer a list of questions from MEE regarding Dorsey’s knowledge of the Saudi spies.

U.S. prosecutors say that Alzabarah was one of two employees recruited by top Saudi officials. Investigators alleged that a Saudi working as a social media adviser for the Saudi royal family recruited Twitter engineer Alzabarah by flying him to Washington, D.C., for a private meeting with an unnamed member of the family.

"Within one week of returning to San Francisco, Alzabarah began to access without authorization private data of Twitter users en masse," the complaint filed in the U.S. District Court in San Francisco said.

The effort included the user data of over 6,000 Twitter users, including at least 33 usernames for which Saudi Arabian law enforcement had submitted emergency disclosure requests to Twitter, investigators said.

Alzabarah was placed on administrative leave, his work-owned laptop was seized, and he was escorted out of the office. The next day, he flew to Saudi Arabia with his wife and daughter and has not returned to the United States, investigators said.

A warrant for his arrest was issued as part of the complaint.

Another Twitter employee, Ahmad Abouammo, is alleged to have shared the data of two Twitter users of interest to the Saudi government earlier in 2015 in exchange for $300,000 and a $20,000 gold watch, the complaint said.

The complaint also points out the recent large Saudi investments in Twitter, one of which was made just two months before Alzabarah was discovered. In October 2015, Prince Al-Waleed bin Talal’s Kingdom Holding Company raised its stake in the company to 5%, surpassing Dorsey’s stake, it said.

Kleiman said the relationship between Twitter and Saudi Arabia is mutual, however.

“It’s not just that the Saudis are heavily invested in Twitter. Twitter is heavily invested in the region from a viewing perspective. Twitter benefits enormously from the number of people who use and rely on it in Saudi Arabia, Egypt, the UAE, etc. So I think the interest in mutual,” he told MEE.