Aksa Jeneratör partners up with Mitsubishi for joint generator production 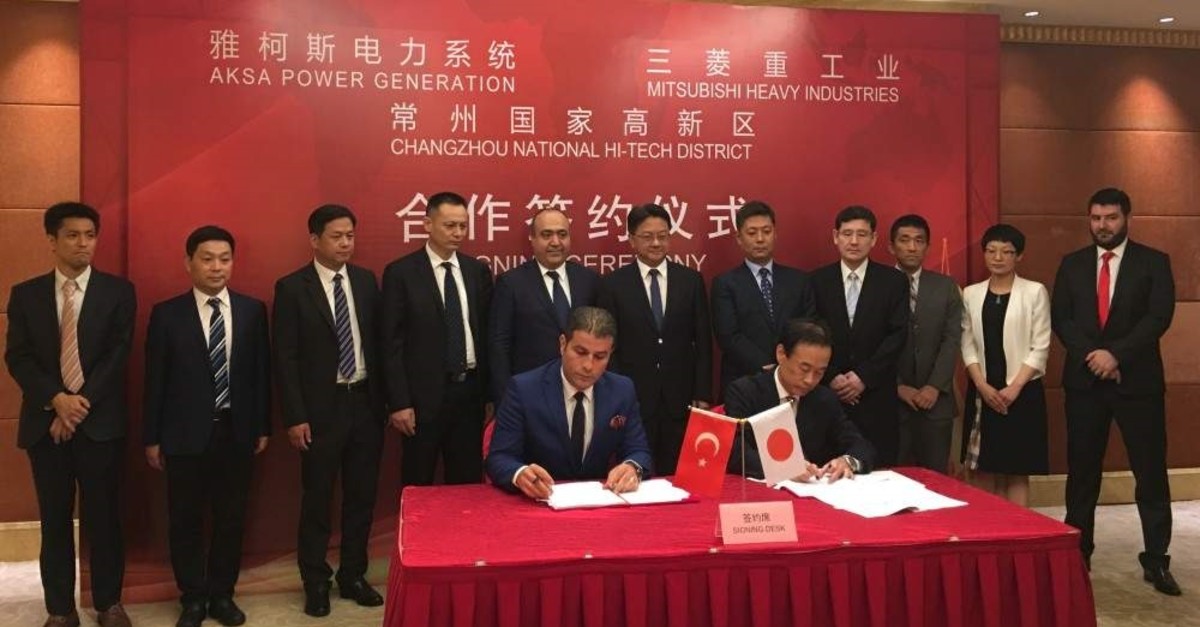 by Daily Sabah Nov 14, 2019 11:35 pm
Turkey’s global power generator brand Aksa Jeneratör has established a high-tech power generator production facility with Japanese industrial giant Mitsubishi. The new company, based in the Asia Pacific, will create an additional business volume of $100 million a year.
Aksa Jeneratör, which sells power generators to 170 countries from the Americas to Asia, and from Africa to Oceania, and which is one of the five largest power generator manufacturers in the world with its production facilities in Turkey, China and the U.S., has established an important collaboration that will raise its rank in the world league as a global brand.
The agreement for the establishment of a company that will develop innovative solutions and offers high-tech products was signed Thursday between Japan's largest engine manufacturer Mitsubishi Heavy Industries (MHI) and Aksa Jeneratör.
Aksa Jeneratör CEO Alper Peker said that Aksa Jeneratör, a brand which has been the symbol of trust for 35 years, is one of the leaders not only in Turkey, but also in global markets, adding that they have become a brand that moves and shakes the sector rather than one that follows developments in the sector.
The new company, under the Mitsubishi-Aksa brand, will manufacture generators in Turkey and China, he added.
Pointing out that the partnership process has been implemented as a result of more than two years of negotiations on technique, engineering and quality, Peker stated: “In the light of the evaluations and analyses made by the Japanese experts, Aksa Jeneratör has successfully completed this process thanks to its 35 years of sectoral experience and superior quality standards and has become a partner with the world giant.” Drawing attention to the support of Turkey’s rising brand image to Aksa Jeneratör’s global journey, Peker said: "The brand image of Turkey, which has developed and gained strength based on this, has been proven in the international arena with this cooperation.”
Underlining that Aksa Jeneratör has been working with the objective of being one of the top three manufacturers in the world by 2025, Peker touched on the company’s growth strategies. “As a part of its growth strategy, Aksa Jeneratör aims to continue its investments in many countries in Africa, North and South American countries, and India as well as in Europe and become one of the top three manufacturers in the world. At the same time, we will accelerate our development by expanding our worldwide sales network and by monitoring possible opportunities in the African and South American markets. In the long term, we aim to increase our market share in Brazilian and Australian markets,” he added.
Aksa Jeneratör, which has supported the development of Africa through its existence on the continent for two decades, has three production facilities in Turkey, China and the U.S. It offers services in 19 offices and four representatives in Asia, Europe, Africa and the Americas, achieving a TL 1.5 billion in turnover in 2018. The company provided 65% of its turnover from overseas sales.
Aksa Jeneratör, which has been involved in giant projects such as Istanbul Airport, Ghana’s Kotoka International Airport and the Ashgabat Olympic Complex, is selling power generators in many countries from New Caledonia Island to the Comoro Islands and finally to Vanuatu, the tourist paradise of Oceania.
Last Update: Dec 20, 2019 1:41 am
RELATED TOPICS