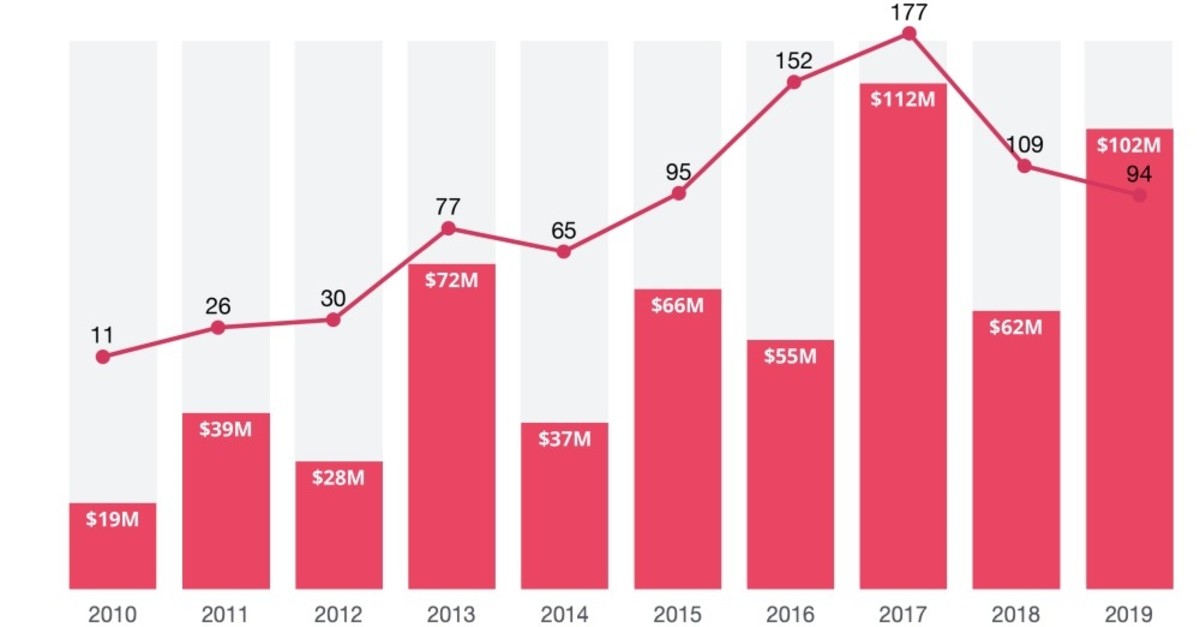 Investments in the Turkish venture ecosystem are once more on the rise as demonstrated by the figures announced this week at the Turkish Venture Ecosystem 2019 event, a research platform that tracks the development of the startup ecosystem across the country.

A total of 94 startups managed to receive a total of $102 million in investments over the course of the last year – a 66% increase year-on-year – well up from the $62 million received by 109 startups in 2019. The Turkish startup Getir, which offers instant deliveries for fast-moving consumer goods (FMCG), raised $38 million in a Series A round in the last quarter, which had a noteworthy impact on the final results. Investments received by Getir made up 37% of all investments in 2019.

While digital markets and the market distribution sector received the highest amount of investment due to the large amounts of capital received by Getir, the highest number of investments were made in the financial technologies (fintech) sector.

State incentive at the idea stage

While the Scientific and Technological Research Council of Turkey (TÜBİTAK ) and the Small and Medium Industry Development Organization (KOSGEB) granted a total of $8.6 million in state incentives to 985 startups in the ideas phase in 2019, no startup received investment at the idea phase according to the startup monitor Startups.watch.

In this sense, the state was the biggest angel investor in the idea stage. Some $95 million was invested in 91 startups in their small and medium-sized (SME) and growth stages, while TÜBİTAK and KOSGEB granted $24 million in state incentives to 983 startups at these stages. 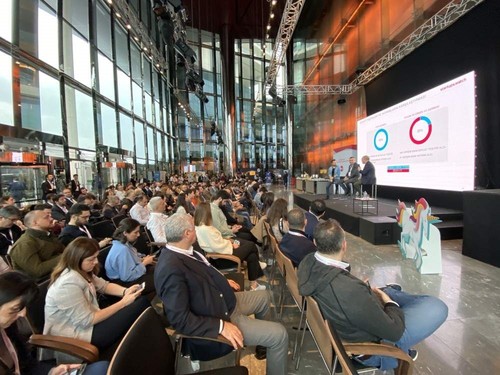 Turkish Venture Ecosystem 2019, during which last year's performance of the venture ecosystem was shared, was held on Feb. 5 in Istanbul.

Turkey in the top league

Turkey has moved up to the next league in terms of foreign investment. In terms of angel and venture capital (VC) investments, Turkey completed 2018 in the second league, rising to the first league in 2019 thanks to the investments of $102 million that enabled it to rank 20th among 36 European countries. The country ranked third after Israel and the United Arab Emirates (UAE) in the Middle East and North Africa (MENA).

The acquisition of startups such as Iyzico, Foriba and Parachute last year has provided a major boost to the morale of entrepreneurs and local funds. As such, groups like 212 and Revo Capital having increased their cash injections into the Turkish Venture Ecosystem.

A total of 10 startups were sold for $250 million last year. As of 2018, venture capital funds, which invested their first funds in startups between 2012 and 2017, started to establish their second funds one by one.

"Startups in Turkey set very low prices when they make valuations. Whereas, figures and estimates in Eastern Europe surprise us. That is why it is so important for entrepreneurs to target global businesses from the very beginning," he said.

Ali Karabey, a 212 venture capital partners, underlined that the target was to establish a unicorn – a privately held startup valued at over $1 billion – and those who are investing in Turkey are pleased to see

"Currently, we have startups with a valuation of over $1 billion, though not official. Even though we made an exit, I am sure that iyzico is one of the startups that will manage to become a unicorn," he noted.

In a speech, Collectivespark investment fund founder Atıl Erken observed that the outputs from 2019 had provided extra morale for the venture ecosystem: "We are very pleased with the growth achieved by our investments. We invested $6.8 million in eight startups in the space of one and a half years. We are planning to invest in four to six more startups in 2020," Erken added.

Turkey 4th in the number of women entrepreneurs in Europe

Female entrepreneurs presided over 16% of technology startups established in Turkey between 2010 and 2019. This figure makes Turkey the fourth-highest in Europe after the Czech Republic, Italy and Portugal in terms of women's representation at the upper end of business initiatives.

Some 58% of the startups in the babycare sector that held the highest rate were launched by women entrepreneurs. The startups that received investment in 2019 with women as founders or founding partners are Adalethanım, Armut, ComPay, Laska Energy, Manibux, Micro-S Biotechnology, Pakolino, Shopi, Tutumluanne, Twin and Vispera.

According to MobileAction, which gathers statistics about the world of app startups, the Turkish e-commerce platform Trendyol ranked first as the most downloaded domestic application in the Turkish market in both application stores in 2019.

The biggest apps of the year came in the categories of Games and Shopping. Trendyol, n11, sahibinden.com and Fun Race 3D (from Good Job Games) all came within the top 10 for downloads from both major app stores.

"The number of investments we have received is actually not very high. However, since the amount of investment in technology startups remains very low in Turkey, our $38 million agreement is considered to be very large. However, the number seems big as an investment is low. Although Turkey has deficiencies in various issues, it deserves more in terms of investment. Turkey should receive more not only in technology but across all sectors," he added.

Salur said he was constantly asked about when he would sell Getir. "Everybody is in a little bit of a hurry. Not every entrepreneur has to exit. I respect those who exit. However, I think the potential of this project is high," he continued. "A startup becomes a permanent corporate culture after the 10th year. We are making long-term plans in this regard. From the very first day, we set out to make this startup a global business. We ask 450 questions everywhere we go. Based on our answers to these questions, we give Getir a score. As a result of all the evaluations we have done, we plan to take the first step to London."

Tiko opens to the Portuguese market

Sina Afra, the founder of Spanish company Tiko, shared his global business experience at the event, announcing that the company would be making preparations to open in Portugal in 2020.

Afra pointed out that after six years, global investment funds were now monitoring developments in Turkey. "Many investors ket up to date with Getir. Silicon Valley-based investment has been a motivation for all of us. Now many mutual funds have started to look at Turkey differently. I think we will see the effects of this in 2020," he further stressed.

Peak ranks among the top 3 in the U.S.

Ömer İnönü, the strategy director of Peak, a Turkish startup reformulating global business culture, stated that the group aimed to create technologies and products that impacted the world from its base in Turkey.

"As a company, we have aimed to do business globally from the very beginning. That's how we gained experience with different games," he said. "After 2014, we decided to focus on puzzle games. We achieved to rank among the top three in the U.S., our target market. Afterwards, we succeeded as a Western game developer in a market as crucial as Japan. We managed to become the 25th largest application developer in the world and the third-largest in Europe. We currently have 30 million monthly active users across 193 countries."

Signups for Turkey's leading information and communication technology firm Türk Telekom's startup acceleration program PİLOT are still being received. The program continues to support entrepreneurs, with around TL 150,000 in direct cash support on offer to each team accepted by the PİLOT program.

Eighth-period applications have been opened as part of the program, which Türk Telekom launched to support technology startups and boost sectoral cooperation to offer innovative products and services to its customers, as well as to support domestic and national startups. Applications can be made via www.turktelekompilot.com.tr.

Türk Telekom's Strategy Planning and Digital Deputy General Manager Barış Karakullukçu stated that 65 startups had graduated from the PİLOT program to date, having received a total of TL 4 million in cash support from Türk Telekom, while graduates provided employment for 350 people across 2019 and achieved a turnover of TL 41 million.

"To strengthen the entrepreneurship ecosystem in our country and to offer innovative products and services to our customers, we continue to increase our investments and works in this field every year," Karakullukçu said. "As part of the PİLOT program launched in 2013, we started to receive eighth term applications in February and will continue to support startups with our technology, knowledge and connections. At Türk Telekom, we offer technology and infrastructure support to startups to help them take on innovative business ideas, allowing them to flourish while supporting them financially. To this end, I invite all entrepreneurs with innovative business ideas to apply and wish them all the best success."

In the latest period of the program, TL 150,000 in cash support will be up for grabs for every startup accepted into the program, with each company also offered the opportunity to cooperate with Türk Telekom.

Furthermore, the startups will be provided access to a large mentoring network made up of major investors and business connections attached to Türk Telekom, as well as an office area, technological infrastructure, a mobile communication package, free promotional materials and accommodation support for teams participating in the program from outside the city.

Startups that apply to the program are evaluated according to criteria such as cooperation potential, innovation and the applicability of their idea, the size and growth potential of their target market, the consistency as a business model and the competence of the team.