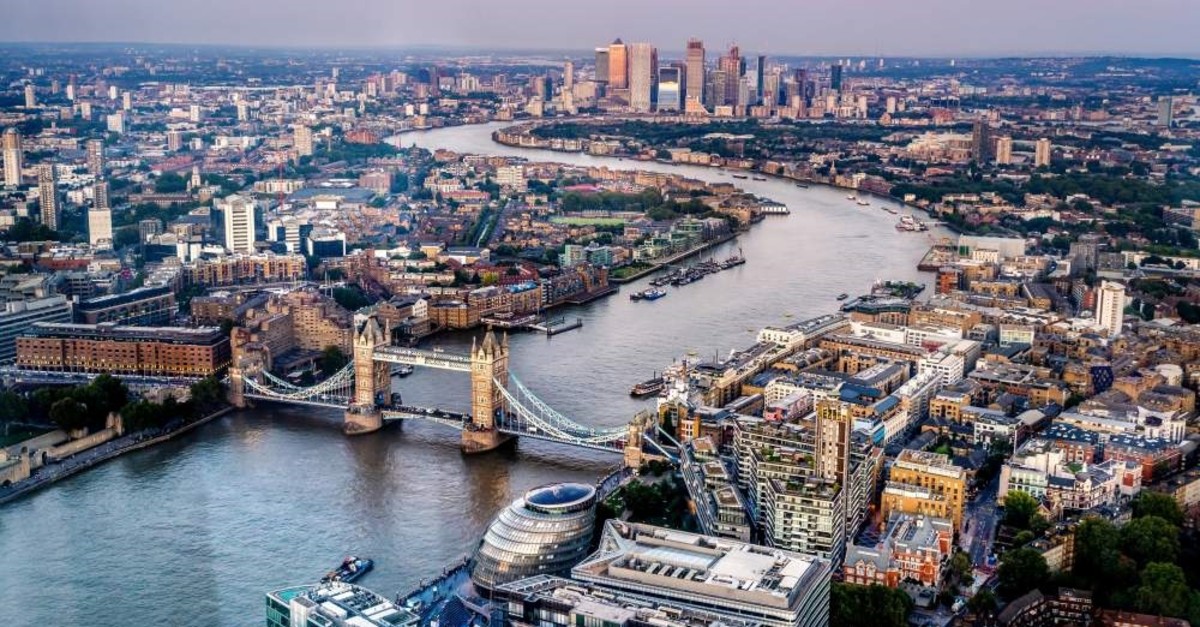 Recontact:London is trying to capture a new narrative language by combining the artistry of technology with the art of cinema in the gaming world. (iStock Photo)
by Timur Sırt Feb 21, 2020 7:30 pm

Two siblings, Simay and Eray Dinç, have combined art with entrepreneurship and turned London into a gaming scene with Recontact, which has already been transforming Istanbul since 2015

Cinematographic mobile game series, Recontact, which was named the best mobile game in Turkey by Apple and introduced in the "Most Innovative Game" category in 153 countries, sets out on a global journey from London in the latest coup for the group.

British actor Ross Mullan, who played a White Walker in the world-famous "Game of Thrones" series, stars in the leading role in Recontact:London, the third game of the series that has won awards worldwide and reached an audience of millions.

Established by Simay Dinç and Eray Dinç, Recontact offers gamers a different experience with cinematographic images, combining the entrepreneurial spirit of Simay Dinç, one of Turkey's most successful female entrepreneurs, and her brother's artistic perspective. The Dinç siblings are rather excited about the game, which first appeared on the Apple iOS platform on Feb. 20 in 12 languages. 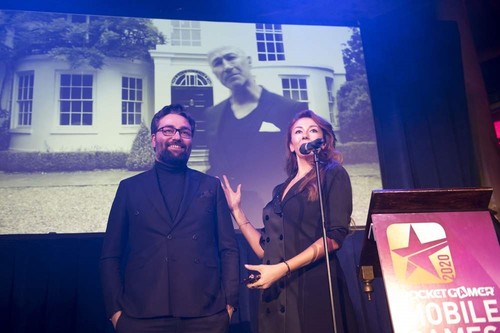 "We aim to reach mobile gamers who want to become cyber detectives and try to solve the mystery in London," she said. "To provide an innovative experience, we developed five different game dynamics and Photogometric AR within the cinematographic structure. For the first time, the game application was offered to the market on the iOS platform. We see the App Store like an art gallery. Our work is exhibited as a work of art."

Dinç also spoke of the angel investment they had received. "We took important steps with the support we received from our angel investors Erdem Yurdanur, Akın Babayiğit and Hande Enes," she continued. "Moreover, we did not receive a single penny of marketing support until this point. However, we have had the chance to invest a little more in the new game. We are committed to working with more professionals in the production process. We gained significant experience in the first two episodes of the series, which we preferred to finish like a movie rather than the continuity of the game. Now we have worked with a different game setting."

Recontact:London, trying to capture a new narrative language by combining the artistry of technology with the art of cinema in the gaming world, closed the British Museum for the shootings. It is made up of images from security cameras in London, which is the city with some of the most surveillance cameras in the world.

Dinç further stressed that London Municipality is constantly helping with the shooting because of its contribution to the promotion of the city.

An artist can see all the details, which the entrepreneur regards as a worthwhile cost, as indispensable. "Eray knows that I will always provide the best conditions. We have to position the game top quality, aesthetically. The game has a high loyalty audience. The original soundtrack of the cinematographic mobile game was performed by the best Symphony Orchestra in Moscow, which includes 60 musicians," she noted.

Art and engineering hand in hand

Eray Dinç underlined that the digital game industry was the hardest to crack of all the creative sectors.

"The excessive details we need to calculate and the compatibility of both artistic and engineering are the most destructive processes," Dinç said."Recontact:London integrates all branches of audiovisual art, from cinema to photography, video art, music and literature, all in one game. A 1.5-year production process, hundreds of shots in London, software stages, tests and localization prove that a game does not actually have a very enjoyable development process. However, when the game meets the players and you get their appreciation, all the exhaustion is forgotten."

He further explained the motivation behind Reconnect:London. "In fact, as a director, I wanted to use new methods and technologies in the narrative. In doing so, the passion to search for a cinematic understanding that was adapted to mobile devices and designed for them came forward. I say give Recontact:London, a cyber-adventure full of secrets that appeal to actors and cinema lovers of all ages, a try," Dinç added.

The first phase of Türk Telekom's "Next Generation Future" project has been completed with the "Smart Technologies IoT Hackathon."

The competition attracted a great deal of attention and the winners received TL 15,000. It focused on environmental, Internet of Things (IoT) and disaster issues.

Accordingly, the first phase of the "Next Generation Future" project, which involved theoretical and practical training – on subjects like IoT, programming and cloud computing – for vocational high schools and high school students, has been completed.

Türk Telekom completed the first part of the project with Habitat. The "Smart Technologies IoT Hackathon," brought together several young teams, who trust their ideas, for a 48-hour workshop to develop useful, digital and innovative solutions using the IoT.

At the end of the workshop, a project that aims to prevent poisoning caused by the use of dirty water, by analyzing the water resources, came out on top. Another program that enables noncoders to develop IoT came second. It was followed by a project that looks to determine the location of victims stack under debris, came third.

"As our possibilities rapidly increase with technology, keeping up with and managing the change plays an important role for us," Türk Telekom Technology Assistant General Manager Yusuf Kıra said in his speech at the award ceremony.

"Türk Telekom works diligently and determinedly in the responsibility of leading the process of Turkey's digitization. We are aware that young people are the biggest component of our effort. We find the "Next Generation Future" project very valuable in this respect. We have evaluated 15 different projects in the Smart Technologies IoT Hackathon and awarded the top three. With our Hackathon, we aim to offer smart technological solutions to global problems and reveal projects that will facilitate human life. However, whether they have received a reward or not, all the young people who have been with us on this platform have proven that they have great virtues that will shape the world of the future. On behalf of Türk Telekom, I thank each of them separately," Kıra noted.

Contestants between the ages of 15 and 30 attended the "Smart Technologies IoT Hackathon." They were evaluated in teams of four, presenting their projects to the judges 48 hours after the pre-selection had taken place.

*IoT Simple, a project of the YönTeam enables non-coding people to develop IoT solutions won the second prize of TL 10,000.

*Search Band, E-Karem team's project to determine the locations of the victims stuck under debris won the third prize of TL 5,000.

Institutional investment funds are moving along swiftly as of the start of 2020. Banks and Holdings stand out in terms of investment and it is said that Sabancı Holding and Eczacıbaşı are about to make statements regarding the Corporate Venture Capital funds.

In this context, Teknogirişim GSYF invested in Visiomex, which manufactures artificial vision-based quality control products, and Oo-Kuma startups that produce 3D printers and consumables. An investment contract was signed between the companies at the ceremony, which was held with the participation of KT Portföy officials as well as Visiomex and Oo-Kuma entrepreneurs.

Global market is the target

Visiomex, one of the first ventures of Teknogirişim GSYF's ongoing investments in 2020, develops artificial vision-based quality control products, which are the subtitles of artificial intelligence (AI) science for the manufacturing industry.

Furthermore, Visiomex, thanks to various products, including smart desks, smart kiosks, plastic injection mold protection systems and screen-printing controls, appeals to both local and global markets to serve a range of uses. Visiomex will use the investment from Teknogirişim GSYF to increase its product range and open up to new markets.

It is managed by Arda Kocaman and Gökhan Gönültaş. Continuing its research and development activities within ITÜ Teknokent and growing with its qualified team, Oo-Kuma produces its solutions in series at its own production facility and delivers it to its users.

It aims to be the main player in the sector and continues its investments to meet all kinds of user needs in 3D printer technologies. Oo-Kuma will also use the investment from Teknogirişim GSYF to develop its product range and open up to new markets.

Huawei to provide TL 50 million in support to software developers

Meeting with companies and developers at the Huawei Developer Day (HDD) event, held for the first time in Turkey, Chinese tech giant Huawei announced that it would invest TL 50 million toward the development of Huawei Mobile Services (HMS).

Having experienced difficulties after the decision of Google following the U.S. government's sanction decision in May of last year, Huawei announced that it would support software developers in Turkey with TL 50 million to go toward mobile services.

Phones such as the Mate 30, launched by the Chinese company, present just a camera and a simple phone, without popular apps. The company cannot explain how it will work to install popular applications on the phones, however, these models, which have problems with installing updates, have received operator support to sell more than 1 million units by the end of the year.

The company is likely to encounter a variety of issues, including the product return rights of users who cannot install popular applications on Huawei phones that they have bought. The fact that the most popular applications are not installed and cannot be installed without technical support makes the device only a smart camera and a simple phone device.

Amid the participation of many developers and content providers, Turkcell, DenizBank, Netmera, and Mobiscus, which are some of Turkey's biggest companies, have shared their experiences about the HMS process at HDD. There the appropriations, bonuses and awards allocated to Turkish developers were also announced. But even on the phones sold, problems remain.

HMS is a topic that concerns consumers, software developers and content providers. Increasing the use of Huawei Mobile Services among native application developers is among the company's 2020 strategic goals. Huawei Turkey's budget to promote HMS among developers and consumers, marked one of the important topics of the day.