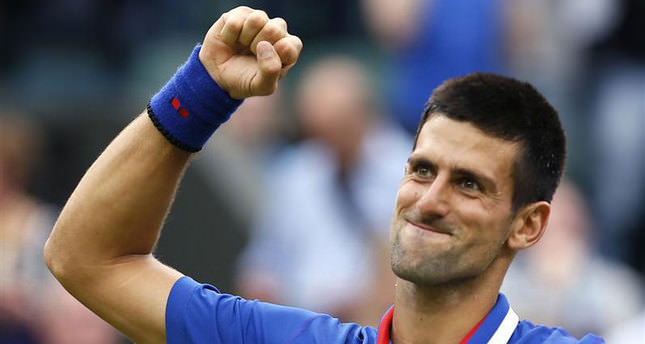 Djokovic extended his recent dominance over Rafael Nadal by rallying for a 4-6, 6-3, 6-3 victory Sunday to win the Italian Open for the third time - then dedicated the title to his flood-hit native Serbia by carving a heart on the clay with his racket. "This heart on the court is for you," he told the fans in Italian during the victory celebration. "It's also a special dedication to my country, which is suffering a lot right now. My heart is with them."

In the women's final, Serena Williams kept the crowd from being a factor in a 6-3, 6-0 victory over 10thseeded home favourite Sara Errani to win her third Rome title. Errani was bidding to become the first Italian to win the tournament in nearly 30 years but the top-ranked Williams quickly took control in both sets and Errani was slowed by a left thigh problem.

Williams had a left thigh problem herself last week that prompted her to withdraw before her quarterfinal match at the Madrid Open but now she appears back on track for the French, which starts next Sunday. "I'm not 100 per cent but I'm just kind of going on adrenaline," the top-ranked American said.

Djokovic found his motivation from a different source. Authorities say 25 people have died in the Balkans because of the worst flooding in a century after three months' worth of rain fell on the region in three days this week. Tens of thousands of homes were left without electricity or drinking water. "I'm trying to contribute in my own way," Djokovic said. "These are very critical times for our country and our people. But we're being united and this win and this trophy is dedicated to them."

Having also been beaten in Monte Carlo and Barcelona recently, it marked the first time in a decade that the top-ranked Nadal has lost more than two matches on clay in the same year. Nadal was pushed to three sets in four out of his five matches here. "When he hit the first ball good a lot of times it was very difficult to arrive to the ball and change the dynamic of the point," Nadal said. "I didn't have enough energy to hit the first shot with the right intensity."

The second-ranked Djokovic has now won four straight matches against Nadal - the previous three in straight sets - and takes the psychological edge to Paris. "It gives me a lot of confidence winning against Rafa in the finals of a big tournament on clay," he said. "It's definitely a confidence booster. It's an ultimate challenge and I'm very happy with my game so far and hopefully I can carry that into Roland Garros."

The French Open is the only Grand Slam that Djokovic has yet to win, with his best result a runner-up finish in 2012. Nadal has won the tournament eight times. Djokovic was able to dictate play by stepping inside the baseline. "I tried to be aggressive from the start to the end," said Djokovic, whose other Rome titles came in 2008 and 2011. "I know that the only way to win against him is to be aggressive." Earlier, Errani left the court for an injury timeout while trailing 5-3 in the opening set and came back with her thigh bandaged. On the final point before she left the court, Errani pulled up and let a shot from Williams pass by her without even attempting to get to it. "I'm sorry. You were unbelievable all week," Errani told fans during the victory ceremony, as she brushed back tears. "I tried to do my best and stayed on the court only for you."

Williams' other Rome titles came in 2002 and last year - and she went on to win the French Open on both occasions. "I'm also sorry for Sara today," Williams told the crowd in Italian. "She really played great all week."

Organizers attempted to whip up patriotic fervour by having the Italian anthem sung before the players walked out onto the court, and fans continuously chanted "Sara, Sara" to try and encourage Errani in an atmosphere that more resembled a Davis Cup or Fed Cup setting. But Williams jumped out to a 3-0 lead and while Errani had a few chances to get back into the first set, Williams overpowered the Italian with her serve - she had seven aces to Errani's none - and overall attacking game. Still, Errani could console herself by becoming the first Italian finalist in the tournament since Raffaella Reggi took the 1985 title in Taranto.
Last Update: May 20, 2014 1:57 am
RELATED TOPICS