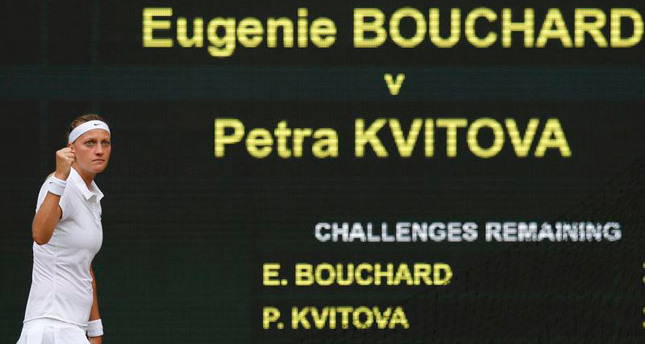 by Jul 05, 2014 12:00 am
Czech Petra Kvitova came close to tears after hammering Canadian Eugenie Bouchard 6-3, 6-0 on Saturday to win her second Wimbledon title in four years.

The sixth seed proved to be an unstoppable force on the grass with a 55-minute win which left the Canadian challenger no chance. Kvitova let her emotions show as she grasped the winner's trophy after the win, which will take her back into the ranking top five.

"This was a tough match, but I was mentally strong. I've already played a final here but you never know what can happen," said the winner.

"I had good tactics from my coach. I wanted to be here again with the trophy.

"I can't say this Wimbledon title is more special than my first, but after three years, to get it again is absolutely amazing."

Bouchard, 20, who had come into the final without the loss of a set, will step up to seventh on the WTA list, highest ever for any Canadian.

The 2012 junior Wimbledon winner was run down by Kvitova, who could not put a foot wrong in the rout. She fired 28 winners and broke on six of 13 chances in the one-way affair.

"Sometimes an opponent plays better than you and that's what happened today," said Bouchard.

"I started well, but she was right in there. I wasn't able to play my game.

"She took all of the chance away from me. She put me under a lot of pressure. I didn't have many opportunities.

"I'm disappointed with the loss, but I also realise how far I've come already. I believe that I can be at the top level."

Watching from the Royal Box were retired 2013 winner Marion Bartoli and Britain's Princess Eugenie, after whom Bouchard is named.

Sixth seed Kvitova, her right thigh heavily strapped, had taken immediate control of the match as she beat Bouchard for the second time in as many meetings.

The Czech needed less than half an hour to win the opening set after breaking twice for 5-2 and losing her serve in the eighth game, before taking the set on a third chance.

In the second, the pressure continued as Kvitova romped home all but unchallenged by an opponent who could not penetrate her armour.

Kvitova secured victory on a cross-court winner which Bouchard could not touch.