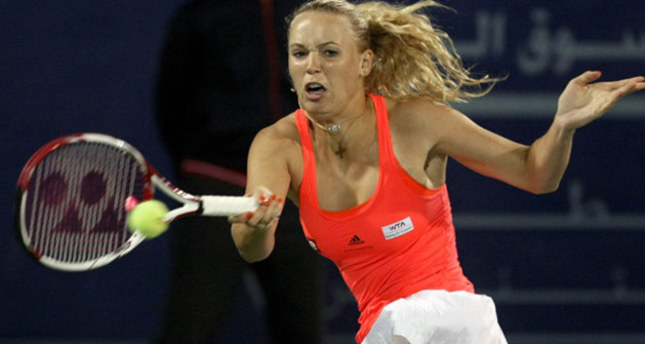 Top seed Caroline Wozniacki won her first title of the year and 22nd of her career on Sunday when she defeated second-seeded Italian Roberta Vinci 6-1, 6-1 in the Istanbul WTA final. She needed only 67 minutes against the 24th-ranked Italian.

Wozniacki won 76 percent of points on her first serve compared to just 43 percent for Vinci and also saved all six break points against her at the hardcourt Koza World of Sport Complex. "I served well and pushed her around the court," said Wozniacki, who won all seven of her service games. Vinci was broken five times in the match and lost her last three service games. The two players are 2-2 in head-to-heads with Vinci beating Wozniacki when she was the top-ranked player in 2011. The former world number one has now won a WTA title every year for the last seven years, winning her first three in 2008, three more in 2009, six in 2010, six in 2011, two in 2012, one in 2013 and now one in 2014. "I'm happy to have won my 22nd WTA title - it's a great feeling.

I'm happy how the final went today. I served well and pushed her around the court, and I really dictated the match," said Wozniacki. Vinci added: "I tried to play aggressively like always but made a lot of mistakes. It's tough to play like that against Caroline because she puts everything back in the court, and it was tough for me to stay in the rallies today. But I'm happy with my week and Caroline just played much better than me."

N o w ranked 15th, her victory in Istanbul came just hours before golfer Rory Mcılroy won the British Open by two strokes at Royal Liverpool. After getting engaged to Wozniacki on New Year's Eve, McIlroy broke off the engagement in May with a telephone call.

About a week after, Wozniacki exited the French Open in the first round. Separately, Serena Williams continues at the top of the women's tennis rankings in an unchanged top 10. The U.S. player has 9,231 points, slightly down from last week's 9,510, but still well clear of China's Li Na on 6,960, the WTA rankings released yesterday show. Romania's Simona Halep is third ahead of Wimbledon champion Petra Kvitova of Czech Republic. Wimbledon champion Novak Djokovic remained ahead of Spain's Rafael Nadal at the top of the men's tennis rankings. The Serb stayed on 13,130 points, still 460 points ahead of Nadal, with the leading five unchanged. David Ferrer of Spain moves up to sixth, with Milos Raonic of Canada slipping to seventh.

Apart from that, Australia's Bernard Tomic climbed from 124 to 70 on the strength of his second career win in Bogota. The 21-year-old defeated defending champion Ivo Karlovic 7-6 (7/5), 3-6, 7-6 (7/4) in Sunday's final to add to his victory in the Sydney International in 2014. Tomic's career had taken a downward turn since making the fourth round of the 2012 Australian Open, a decline which saw his ATP ranking slip from 27. The only change in the top 10 headed by Serbia's Novak Djokovic involved Spain's David Ferrer, who jumped one place into sixth.
RELATED TOPICS