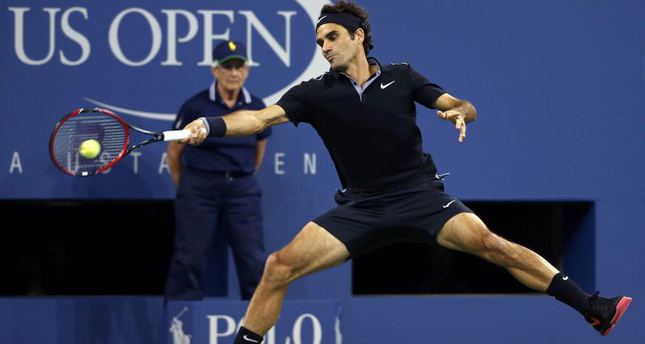 by Sep 05, 2014 12:00 am
Roger Federer pulled off a great escape by fighting off two match points to beat Frenchman Gael Monfils and reach the semi-finals of the U.S. Open on Thursday, keeping his bid for an 18th grand slam on track.

The stirring 4-6 3-6 6-4 7-5 6-2 comeback win marks the ninth time in his career Federer has rallied from two sets down to snatch victory, setting up a final-four meeting with 14th seed Marin Cilic.

Sixth seeded Tomas Berdych had no chance of conjuring a similar escape and lost 6-2 6-4 7-6(4) to big-serving Croat Cilic, who is making his return to Flushing Meadows after missing last year's grand slam due to a doping suspension.

Federer, a near perfect 25-1 playing under the floodlights of Arthur Ashe Stadium court, must have wondered which Monfils would show up on Thursday.

Labelled one of the game's great natural talents, Monfils can be wildly entertaining or maddening, depending on his mood and the near capacity crowd saw both sides of the 28-year-old Frenchman during a riveting the three hour, 20 minute encounter.

Monfils added several highlight reel shots to his collection in winning the first two sets, and after Federer won the third he carved out two match points in the fourth.

But with Federer on the ropes the 20th seeded Frenchman could not deliver the knockout punch.

"When I was down two match points, I wasn't feeling so great ... I thought 'this is it, this is the last point, man," said Federer. "Just go down fighting, don't miss an easy shot and let him have it."

Misfiring most of the night, Federer slowly began to find his mark and seized his chance when it arrived, holding serve for 5-5 to close out the fourth set and then breaking Monfils in the first game of the fifth.

"It was one of those moments where you got the back against the wall and hope to get a bit lucky and you hope to play exactly the right shots that you need or that he completely just messes it up," said the 33-year-old Swiss.

"Either way works as long as you get out of it.

"It's just unbelievable to win matches like this at slams.

"I'm not sure I have ever saved match point before in a slam. If that hasn't happened, I'm unbelievably happy that it was today."