Historic win for Turkey at US Open 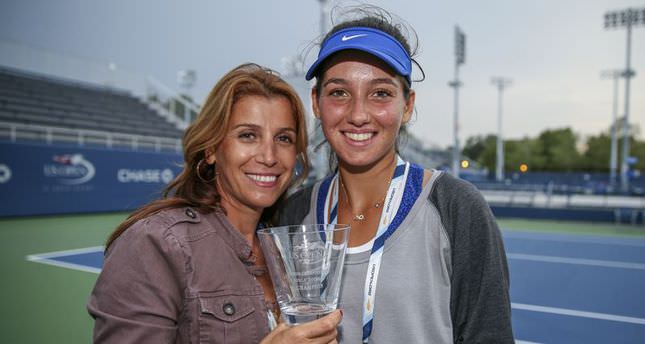 Turkish tennis sports have broken new ground.On Saturday, Turkish tennis player Ipek Soylu with Jil Belen Teichmann of Switzerland defeated Vera Lapko of Belarus and Teresa Mihalikova of Slovakia to claim the title in the Junior Women's Double Final at the U.S.Open. Soylu and Teichmann defeated their rivals 2-1 at the USTA Billie Jean King National Tennis Center in New York. The game was initially stopped for an hour due to heavy rain. Soylu (18) became the first Turkish player to win a Grand Slam trophy. Soylu has won seven singles and six doubles titles on the ITF tour during her career. On July 28, she reached her best singles ranking of 308. On Aug. 18, she peaked at 366 in the doubles rankings. She is also a member of the Enkaspor tennis team. "If you believe in yourself and work hard, nothing is impossible. I thank everyone who believes in me," tweeted Soylu after the victory. Before Soylu, Turkey's biggest success in tennis was gained by Ipek Senoglu.Senoglu first made history in June 2004 when she was qualified into the women's doubles at Wimbledon. Though Senoglu did not advance into the main draw of Wimbledon, she became the first Turk ever to play in a qualifying tournament for a Grand Slam event. Later that year, she became the first Turk to appear in the main draw of a Grand Slam event, when she and partner Laura Granville reached the third round of the U.S.
Open doubles.

Meanwhile, there were many surprises at the U.S.Open. Roger Federer and Novak Djokovic both lost in the U.S. Open semifinals. Instead of Djokovic vs. Federer for the U.S. Open title, first-time Grand Slam finalists Kei Nishikori and Marin Cilic will vie for the championship after a pair of semifinal surprises on Saturday.First, Japan's Nishikori became the first man from Asia to reach a major singles championship match by staying fresher than Djokovic in stifling heat, and winning 6-4, 1-6, 7-6 (4), 6-3. Then, Croatia's Cilic used every bit of his 6'6 (1.98 meter) frame to deliver stinging serves and flat groundstrokes during a quick 6-3, 6-4, 6-4 victory over Federer. "It's fairly simple, I think. Marin played great and I didn't catch my best day," Federer said after his 1 hour, 45 minute loss. "That's pretty much it in a nutshell." So much for No. 1-seeded Djokovic facing the No. 2-seeded Federer in a matchup between men who have won a combined 24 Grand Slam trophies.

In what some will see as signaling a generational shift in tennis, Monday's final will be No. 10 Nishikori against No. 14 Cilic. "That's going to be a sensational day for both of us," said Cilic, who at 25 is a year older than Nishikori. For the first time in nearly a decade since Marat Safin beat Lleyton Hewitt at the Australian Open in January 2005, a major final will be contested without at least one of Federer, Djokovic or Rafael Nadal, who didn't attempt to defend his 2013 U.S. Open title because of a right wrist injury. That trio won 34 of the past 38 Grand Slam trophies, including two months ago at Wimbledon, when Djokovic edged Federer in a fiveset final. "It's exciting for the game to have different faces from time to time," the 33-year-old Federer said. "It's definitely refreshing to some extent. It's big for Croatia; it's big for Japan." Cilic, forced to sit out last year's U.S. Open after a doping suspension, is the first man from Croatia to get this far at a major since his coach, Goran Ivanisevic, won Wimbledon in 2001. That's nothing compared to Japan's wait. As it is, Nishikori was the first man from his country to reach a Grand Slam semifinal since 1933. "[I'm] very happy to make history," said Nishikori, who moved to Florida at age 14.To add to the surprises, Ekaterina Makarova and Elena Vesnina won their second Grand Slam women's doubles title, ending Martina Hingis' run at the U.S. Open.

The fourth-seeded Russians rallied after losing the first set to beat Hingis and Flavia Pennetta 2-6, 6-3, 6-2 on Saturday night. "Definitely, it was so amazing," Makarova said. "I'm just so happy. It was a great two weeks for me." Hingis and Pennetta thought they had broken to get the final set back on the serve at 3-3, but the Russians challenged a shot that had been called a winner and the ball was shown to be out by a millimeter. Playing doubles in her latest comeback from retirement, the 33-year-old Hingis was in her first major final since the 2002 Australian Open. She has won nine Grand Slam doubles titles to go with her five major singles championships. "It was an incredible journey," she said. Hingis returned to competition last year but lost in the first round of the 2013 U.S. Open with Daniela Hantuchova and this summer's Wimbledon with Vera Zvonareva. She and Pennetta had played in three tournaments together leading up to the U.S. Open. Makarova and Vesnina also won the 2013 French Open.