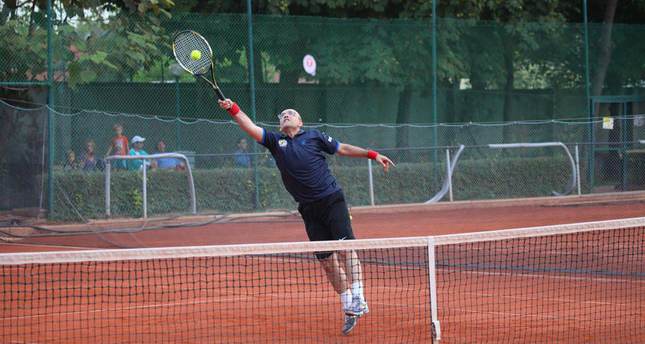 by Daily Sabah Sep 16, 2014 12:00 am
Finance Minister Mehmet Şimşek made his mark on the Fifth Traditional Turkey Tennis Tournament, organized by the Çınar&Çınar Law Office, by reaching the final. Hosted by Norwegian Ambassador Janis Bjorn Kanavin, this year's tournament was undertaken by MTL Organizations and Guinness world record holder Onur Tümer. Minister Şimşek and his partner, Tennis Federation President Osman Tural, made it to the finals, beating their lawyer opponents Hakan Çınar and Argun Bozkurt 2-0.

Şimşek, who has been practicing hard ahead of the tournament, stood out with a string of unreturnable serves. After the high-speed game, Şimşek and Tural easily beat their opponents. Şimşek said their opponents were weak compared to them, adding: "The match was fun and easier than I expected.

Tural's performance was outstanding. We will get ready for the finals." Şimşek stated that he couldn't find time to play sports due to his busy schedule and added people should do sports no matter what. "Football, tennis, running, basketball or volleyball, it does not matter. The significant thing is a healthier life. Sports are important. I have been playing tennis for three years. I am not as good as I want to be, but at least I can blow off steam," said Şimşek. Tural sang the praises of the finance minister, saying: "Those who make fewer mistakes win at these tournaments. We made fewer mistakes as a team. We are ready for the upcoming matches." MTL Organizations representative Berk Mertel said they held "a pleasant and beautiful tournament." He also praised Minister Şimşek's performance and added: "It was a sportsmanlike match. I congratulate all." Moreover, Ali Taygan, who represents MTL Organizations, beat the Russian Embassy and advanced to the next round. The finals will take place on Sept. 20 and 21.
Last Update: Sep 16, 2014 10:47 am
RELATED TOPICS