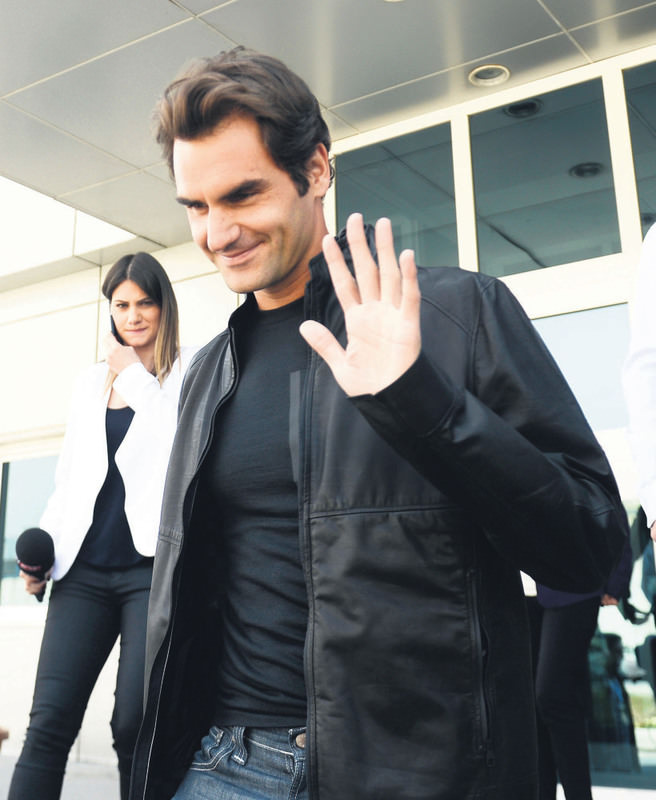 by daily sabah Apr 26, 2015 12:00 am
Swiss world no. 2 Roger Federer arrived in Istanbul on Sunday to join the TEB BNP Paribas Istanbul Open, the first ever ATP World Tour event held in Turkey. The event will be played on clay from April 27 to May 3. It will take place in week 17 of the 2015 ATP World Tour, alongside the Portugal Open in Oeiras and the BMW Open by FWU AG in Munich. Federer will play an exhibition match on Monday with Turkish tennis star Marsel İlhan, who will play his first official match at the tournament on Wednesday. Federer's rival will be the winner of the match between İlhan and Finn Jarkko Nieminen.

Federer holds the records among male players for Grand Slam titles (17), appearances in a Grand Slam final (25), consecutive Grand Slam semi-final appearances (23) and consecutive Grand Slam quarter-final appearances (36) among others. He is one of seven men to win the Career Grand Slam and one of three men to win the Career Grand Slam on hard, clay and grass surfaces. Federer shares the record for most titles at Wimbledon (7) with Pete Sampras and at the U.S. Open (5) with Jimmy Connors and Sampras. He is one of three men to win two different Grand Slam tournaments at least five times and the only one to win five consecutive titles twice. His consistency, success and all-round game lead many to assert his status as the greatest men's tennis player in history. The results of a survey conducted by Turkey's tennis federation indicated that tennis lovers wanted to see Federer in Turkey. Tennis Federation Chair Cengiz Durmuş said: "It is different to watch tennis players on TV and live. Federer will contribute to Turkish tennis by participating on our courts. Federer's probable effect will support Turkish tennis by increasing interest in this sport. After Federer, the other most precious tennis stars will come to Turkey. Previously, we had brought the most famous women's tennis stars to Turkey. This tournament will be very useful for our country."

The CEO of ATP Europe, Laurent Delanney, also said: "The world no. 2 Federer's coming to Turkey will make very important contributions to Turkish tennis. Federer has a long and successful career. I'm sure he thought quite hard before deciding to come to Turkey. He must be convinced thanks to the organizer's big efforts. It will be the first ATP tournament in Istanbul. We will organize it in 62 countries. We felt Istanbul's deficiency. We are proud that this gap will be filled from now on."

The Istanbul Open will be held at the spectacular Koza World of Sports facility, which is promoted as the largest tennis academy in the world. The center court features a retractable roof and will provide seating for 7,500 people. Two other clay show courts raise available seating to 9,500 and the clubhouse features a fitness center, spa, swimming pool and restaurant.
Last Update: Apr 27, 2015 1:07 pm
RELATED TOPICS