Federer: I want to be a role model for young Turkish players 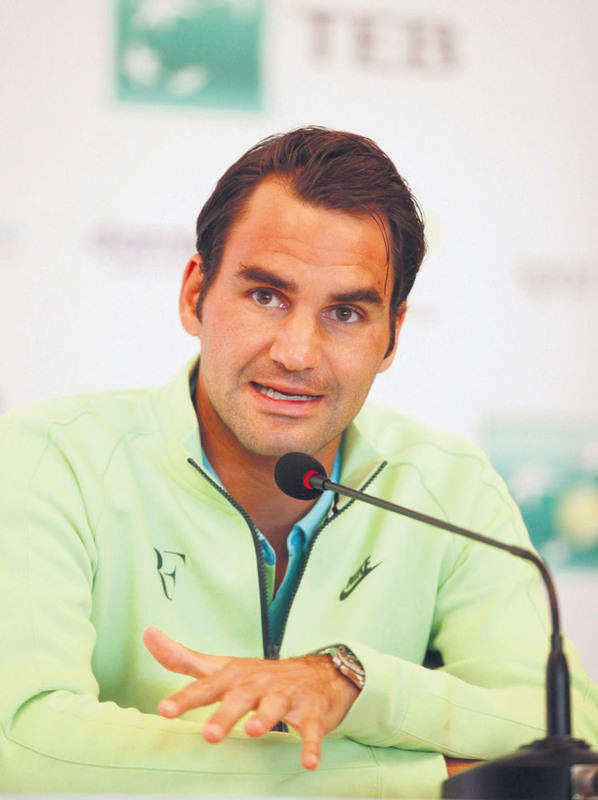 by Daily Sabah Apr 28, 2015 12:00 am
One of the greatest tennis players of all time Roger Federer, who is in Turkey for the TEB BNP Paribas Istanbul Open, claimed that he would like to be an example to the next generation of Turkish tennis players as well as spend his time in Istanbul enjoying the sights and smells of the city. World's No 2 tennis star Federer is the headline name for the forthcoming Istanbul Open and his presence is expected to bring more attention to the tournament. While Federer will be playing out his games in the spring warmth, the great man himself admitted that he would prefer to spend his time in Istanbul enjoying the local cafes, rather than playing tennis. Speaking to Turkish website NTV Spor, the Swiss player expressed his admiration for the only city that straddles two continents, saying said, "I wish I could relax and drink my coffee here instead of playing tennis." Stating that he wants to be a good example for young Turkish tennis players, the Swiss tennis player said, "I hope good tennis players will come from Turkey." Stressing the beautiful view of the Bosporus, Federer continued, "This is an incredible place. My wife called twice today and asked me how I am. I told her that everything is great. We want to come here as a family one day. As we have traveled too much throughout the year, she stayed at home. I hope we will come together."

Tickets for the tournament were sold out in two hours due to the demand to the see the Swiss superstar. Federer said, "It is really good to hear that." He said he once flew over Istanbul over 10 years ago and he had no idea tennis is a popular sport in Turkey. "Hopefully, I will become a source of inspiration for children and young people and I will help the development of Turkish tennis," he said. Federer said the court on which he will play looked very good, adding, "I believe the atmosphere will be beautiful."

Federer, who underscored that the Australian Open was a disappointment for him this season, said, "Actually, I have been playing very good for the last nine months. At least I managed to play in the semi-finals in every tournament and the Glam Slam I attended. Being eliminated in the semi-finals of the Australian Open was a disappointment." He noted that he did not feel relaxed and this was reflected through his game. "I began training right away. The result was visible in Dubai and I am happy to achieve this," the Swiss tennis player went on. After being asked which one of his 17 Grand Slams was the most unforgettable for him, Federer said his goal has always been the world No.1 ; not for seven or eight months but for a very long time. "I always worked hard for it. I pay attention to live like a professional and I succeeded this for a long time. However, 2003 Wimbledon Open where I won my first Grand Slam championship holds a special place for me," he answered.On Spanish tennis player Rafael Nadal's comment in his autobiography that said "People question how many trophies Federer would have won I had not been here but nobody talks about how many cups I would have won if Federer had not been here," Federer said, "You need to have good opponents. If I had not been playing tennis, Nadal would have had another opponent. There would not have been Federer or Nadal if one of us would not have been here." After being asked, "Is your next goal is to become number one once again or win Grand Slams?," Federer said the two are the same. "You cannot become world No.1 if you do not win a Grand Slam," he underlined. He said that French Open is the next Grand Slam ahead of him. "The favorites are Nadal and Novak Djokovic; I am not a favorite. I was close to winning the championship at Wimbledon last year. I hope I will win this year," he added.

Speaking on having the most Grand Slam championships, the tennis player said Nadal is close to breaking his record and he has the potential to do it. "I will not be surprised if he wins more Grand Slams than I do; however, I am not concerned about it too much. I did not care much when I broke Pete Sampras's record. I was something special but you do not feel much once you have it. I want to write my own story," he said.
Last Update: Apr 29, 2015 11:29 pm
RELATED TOPICS