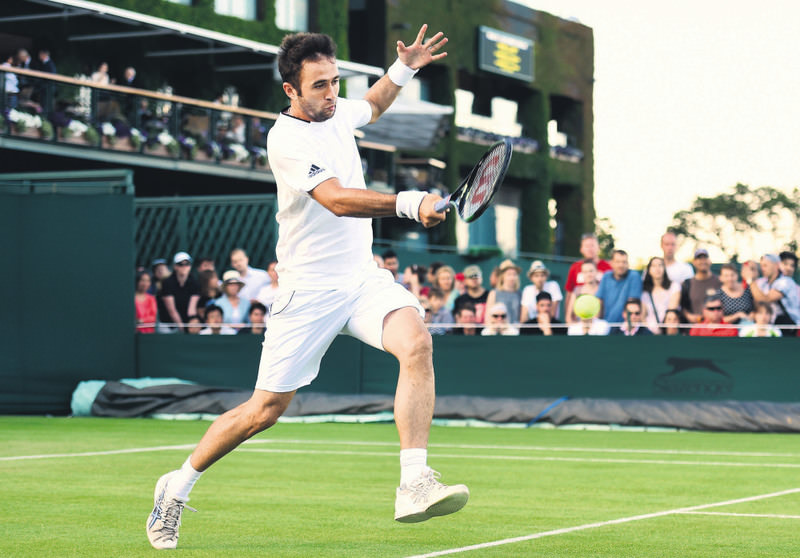 by Daily Sabah Jul 03, 2015 12:00 am
English daily The Guardian covered Turkey's most internationally recognized tennis player, Marsel İlhan. It said, "he has been making history almost since the day he and his family immigrated to Turkey in 2004. The 28-year-old, who was born in Uzbekistan, has set a number of firsts for his country, and on Wednesday he was close to setting another when he had three points for a two sets to love lead over the 14th seed, Kevin Anderson."

But the South African, who lost to Andy Murray in the final at Queen's Club, won five straight points to win the tie-break and then eased through the next two sets to clinch a place in round three with a 6-7, 7-6, 6-4, 6-4 win.

It was İlhan's sixth second-round match at a grand slam and though he was not quite as close to round three as he was at the French Open in 2011, when he went down 13-11 to Guillermo García Lopez of Spain at the same stage, it was another excellent performance that ultimately did not receive the reward it deserved.

Yet his first-round win over Jerzy Janowicz of Poland, a semi-finalist here two years ago, should see him equal his career-high ranking of 77 when the list is updated after Wimbledon. He was the first Turk ever to reach round two of a slam when he won a round at the 2009 U.S. Open and he continues to inspire a generation in Turkey, a nation not used to tennis success.

Speaking to The Guardian, "I am getting closer," İlhan said. "I think, I hope, I can do it in the next grand slam. But I wanted to do it at Wimbledon because Wimbledon has the tradition and in Turkey, it's the most famous grand slam. Everybody knows it. Maybe nobody knows the U.S. Open or Roland Garros, but Wimbledon, everybody knows."

İlhan said he was "not that famous" in Turkey but that people are beginning to follow his efforts more and recognize him in the street. "Especially this year, I played many matches live against Djokovic, against Nadal, and Wimbledon, two matches live," he said. "I am not famous like a footballer because every week they have a match live. But some people do recognize me on the street and they're nice so I like it."

Turkish tennis is improving, İlhan said. "We play Belgium in the Davis Cup next week, our first time this year in Group 2. I used to feel like I was the only one but now the next player we have is about 400 in the rankings and when we beat South Africa 3-2 he won the last match. Things are improving, slowly."

After the Davis Cup, İlhan, who speaks Russian, Turkish and English, will return to Europe for a couple of clay-court events before heading out to the United States for the summer hard-court tournaments. "I hope if I can continue to play like this, I will improve my ranking," he said. "At the start of the year my goal was to be in the top 100; now it's to be top 50 by the end of the year."
Last Update: Jul 03, 2015 10:33 pm
RELATED TOPICS