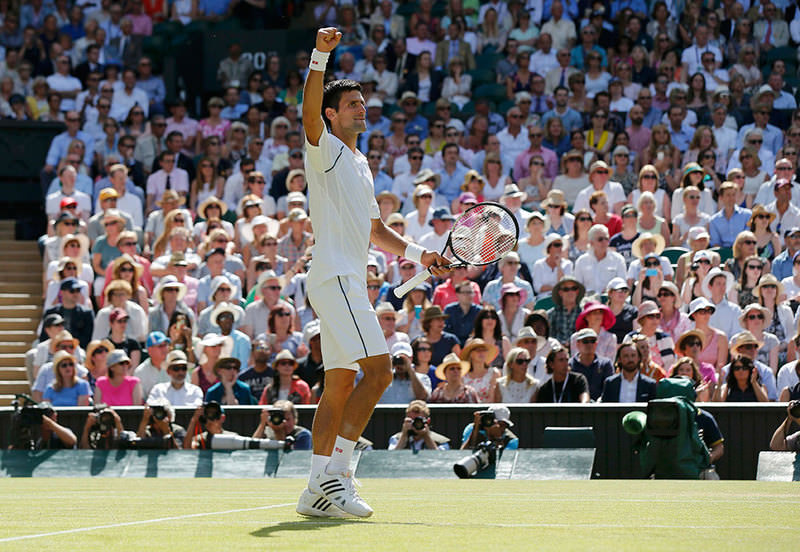 by Jul 10, 2015 12:00 am
Defending champion Novak Djokovic emphatically booked his place in a fourth Wimbledon final with a clinical 7-6(2) 6-4 6-4 defeat of gallant Frenchman Richard Gasquet on Friday.

Underdog Gasquet offered fans on a sun-baked Centre Court plenty of "oooh-aahh" moments with his trademark single-handed backhand but there were not enough to really concern the world number one who looked supreme.

There were a few more unforced errors than normal off the Djokovic racket in a tight first set but once he cruised through the tiebreak he bolted the door on the 21st seed whose wait for a first grand slam final continues.

In the second and third sets a miserly Djokovic made just nine unforced errors and his only slight concern was a stiff shoulder that needed a couple of visits from the trainer.

In the final the 28-year-old Serb will face either seven-times champion Roger Federer, the man he beat in five sets to win his second Wimbledon title last year, or Andy Murray, who beat Djokovic in the 2013 final.

"It was a good performance, considering the occasion. It's always tough. Richard had a great tournament and deserved to be in the semis," said the eight-times grand slam champion. "The first set could have gone his way, luckily it went to me."

The pre-match statistics did not give 29-year-old Gasquet's many admirers cause for optimism.

Djokovic had beaten him 11 times out of 12, had lost one of his previous 31 matches against the Frenchman and had not lost to a player ranked as low as Gasquet in a grand slam arena for five years.

Gasquet does possess arguably the most lethal backhand in the game though and arrived on court fuelled with the confidence of winning a five-set quarter-final thriller against Stanislas Wawrinka, the man who stunned Djokovic in the French Open final.

He used it to great effect early on, too, recovering from dropping his opening service game to break back with a flashing drive, played from shoulder height straight down the line.

At 4-4 he fired another beauty that Djokovic barely saw and then had the Serb on the run only to blaze a jump smash wide.

Those misses usually prove costly against the best and, although Gasquet continued to play with flair, he disintegrated somewhat in the tiebreak to gift Djokovic the opener.

"It was 2-2, then it was 7-2 very fast," Gasquet, who had been looking to become the first Frenchman since Cedric Pioline in 1996 to reach the final, told reporters. "It wasn't good."

Djokovic forged smoothly ahead early in the second set but offered a glimmer of hope at 5-4 when he went 0-30 down, only to dial up some unreturnable serves and pinpoint ground strokes.

Hundreds of fans left their seats at the end of the second set to revive themselves for the day's later blockbuster.

Djokovic did not keep them waiting too long, closing out the match with a single break of serve in the third set.