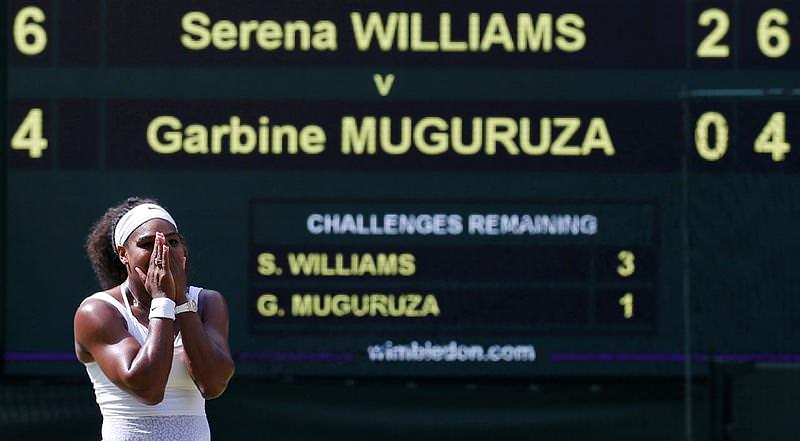 Serena Williams celebrates after winning her Women's Final match against Garbine Muguruza at the Wimbledon Tennis Championships in London, July 11, 2015. (Reuters Photo)
by Jul 11, 2015 12:00 am
Serena Williams made Wimbledon history as the world number one became the oldest woman to win a Grand Slam title with a 6-4, 6-4 victory against Garbine Muguruza in Saturday's final.

Williams was never at her overpowering best, but she recovered from a slow start to see off the Spanish 20th seed in an 82-minute Centre court triumph that will be remembered more for its historic implications than the quality of the champion's performance.

At 33 years and 289 days, Serena surpasses Martina Navratilova as the oldest player to win Wimbledon, and any of the other three Grand Slams, in the Open era.

Serena's sixth Wimbledon crown brought with it a slew of other remarkable landmarks that underline her credentials as one of the greatest female athletes of all time.

But it is her legacy rather than her bank balance that concerns Williams these days and she now holds all four Grand Slam titles at the same time -- the rare 'Serena Slam' she last achieved in 2002-03.

Serena is the first woman to land the French Open and Wimbledon back-to-back since she last won that difficult double in 2002.

Lifting the Venus Rosewater Dish for the first time since 2012 also leaves Serena needing only to defend the US Open to become the first woman since Steffi Graf in 1988 to claim a calendar Grand Slam.

She is just one major title behind Graf on the Open era leaderboard and within three of all-time record holder Margaret Court's tally of 24.

She is the first player since Graf in 1988 to win Wimbledon and the Australian and French Opens in the same year.

Given Serena's 39-1 record in 2015 and her astonishing streak of 28 consecutive Grand Slam match victories, few would bet against the American making more history in New York in August.

Regardless of her defeat, Muguruza, 21, has emerged as one of the brightest young stars on the women's tour after a bravura display in her first Grand Slam final appearance that often left Williams rattled.

Williams' thunderous serve was strangely out of sync in a nervous start to the first set and, after serving a double fault on the first point, she threw in two more to gift Muguruza a surprise break.

Muguruza had more than enough power to trade blows from the baseline and she came out on top so often in the early stages that the frustrated American screamed "that's so bad" after losing another point.

Muguruza, born in Venezuela and raised in Barcelona, had insisted facing Serena was a task to be relished rather than feared.

She was proving true to her bold claim and, by the time Muguruza moved into a 4-2 lead, it seemed an epic shock was on the cards.
However, Serena had recovered from worse predicaments earlier in the tournament.

And with the pressure ratcheted up, the inevitable Serena break back arrived in the eighth game when Muguruza missed with a wild forehand.

Williams scented blood and Muguruza crumbled, a double-fault on set point gift-wrapping the lead to Serena in a set that had been the underdog's for the taking.

Williams had won 28 of her last 30 tour-level finals, including her last nine at the majors, and, in her eighth Wimbledon final, she was finally back in that muscular groove.

But, serving for the match with 5-1 and then 5-3 leads, Williams was gripped by a bad case of nerves and Muguruza broke twice to prolong the contest.

Finally able to compose herself, Serena broke in the next game to seal yet another legacy-defining success.
Last Update: Jul 11, 2015 6:04 pm
RELATED TOPICS