Venus comes crashing to earth in 1st round 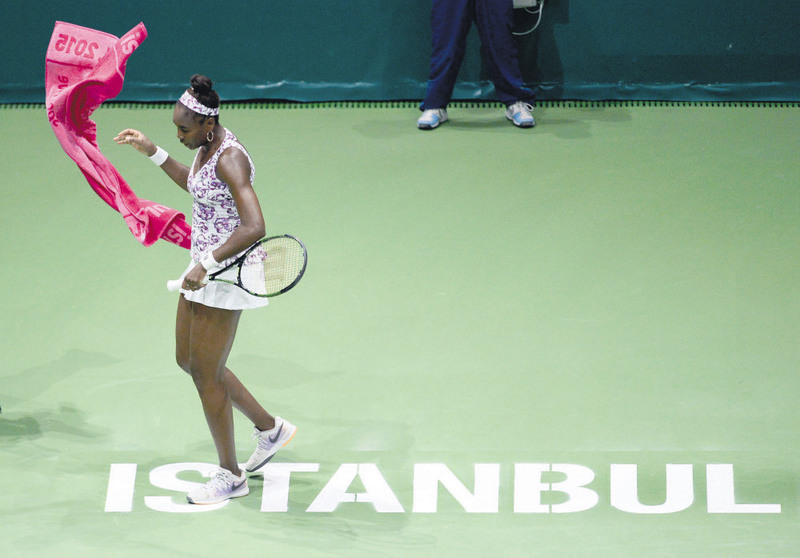 World No. 14 Venus Williams, who was gunning for the championship at the TEB-BNP Paribas Istanbul Cup one more time, was stunned by Kateryna Bondarenko in the first round. Turkish star Soylu won her first match of her WTA singles career

Venus Williams' Istanbul adventure did not last long. She was deemed the favorite for the TEB-BNP Paribas Istanbul Cup and her arrival in Istanbul decorated the Turkish newspapers' pages. She played an exhibition match on the Bosporus bridge on Tuesday. However, a big shock was waiting for both Venus and Turkish tennis lovers. Top-seeded Williams' bid to win the WTA Istanbul Cup ended at the first hurdle on Tuesday as the American icon lost 6-4, 7-6 (7/4) to Ukrainian qualifier Kateryna Bondarenko. It was like a joke but she had to say goodbye in the very first round of the tournament.

Williams, ranked 14 in the world, is no stranger to being upset by Bondarenko, with the 28-year-old Ukrainian having beaten her when the American was third in the world in Toronto in 2009.

Bondarenko - who retired from the circuit at the end of 2012 before returning two years later - looked to be cruising at 6-4, 5-2 before 35-year-old Williams rediscovered her touch and fighting spirit and battled back to even serve for the set.

"I'm really sad. I came here to play and to win but I ran into an opponent that was just too hot today. On a day like today I'm upset - it's normal, it's human. I calm myself down and focus and come back. That moment is that moment. We move on."

Francesca Schiavone and Camila Giorgi of Italy advanced, along with Alexandra Panova of Russia, Kurumi Nara of Japan and Daniela Hantuchova of Slovakia.

In the second day's last match, Turkish tennis player İpek Soylu beat American Anna Tatishvili who, due to health problems, had to retire. With this result, İpek Soylu won her first match in her WTA singles career.

World no. 190 Ipek Soylu faced World no. 124 Anna Tatishvili at the Esenyurt Garani Koza Arena. İpek could not start the match as she wanted but she managed to come back in fighting form. However, she could not maintain her performance and lost the set 7-5.

İpek made a bad initiation to the second set too and was down 5-2. After that she relaxed because she "had nothing to lose," as she said in the press conference. Ipek won five games in a row by breaking her opponent's serve twice to win the set 7-5 and she tied the game at 1-1.

Having some issues from her shoulder before the final set, Tatishvili had some serious health problems in the final set. Anna passed out when the first game was being played but she said that she wanted to keep going. After playing a little bit more, American Tatishvili decided to retire when it was 2-0 and due to this retirement İpek proceeded to the second round after competing for one hour and 59 minutes. Anna Tatishvili cried after she retired

After the match İpek Soylu said: "I am very happy to move to next round. This was the most important victory of my career. I could not start well today but hopefully I will tomorrow against Magdalena."

Jelena Jankovic, the No.3 seed, also went out, falling to Urszula Radwanska, 6-4, 3-6, 6-2. "It was a hard match and it was my first on hardcourts since the grass season," Jankovic said after the match. "I had problems with my timing, the ball was light and really flying. I tried to come back but just couldn't do it today - my opponent was just so solid, and I just made too many unforced errors."