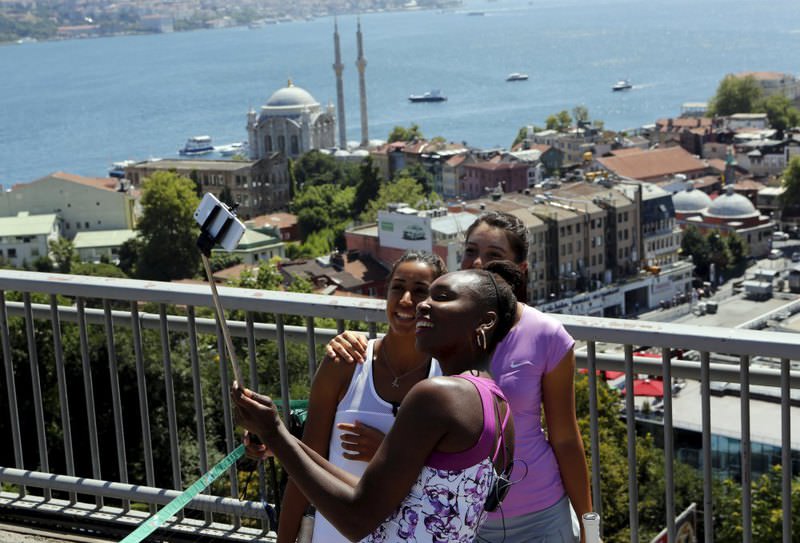 by Daily Sabah Jul 22, 2015 12:00 am
American tennis player Venus Williams, who played an exhibition match with Turkish tennis players İpek Soylu and Çağla Büyükakçay on the Bosporus Bridge on Monday, started training yesterday for the most important tennis tournament in Turkey, the TEB BNP Paribas Istanbul Cup. Williams has already stepped on the court and begun her first training session for the tournament, which will be played at Esenyurt Garanti Koza Arena between July 20 and July 26. WTA World no. 15 Venus Williams has 46 WTA titles in her career. The former world no. 1 Williams has eight Grand Slam singles championships.

The first surprise result has already happened at the tournament with the elimination of second-seeded Elina Svitolina of Ukraine. Svitolina was beaten 6-1, 6-3 by Magdalena Rybarikova of Slovakia in the first round of the Istanbul Cup on Monday. Svitolina was not the only seeded player to make an early exit. Sixth-seeded Daria Gavrilova was also beaten, as was No. 7 Anastasia Pavlyuchenkova. Meanwhile, Büyükakçay, facing Slovak Daniela Hantuchova (World no. 64) in the first round of TEB BNP Paribas Istanbul Cup, being played at the Esenyurt Garanti Koza Arena, said that it is going to be a tough match-up but there are no easy opponents in this tournament.

Stating that TEB BNP Paribas İstanbul Cup is the only WTA organization and that's why this tournament means a lot to her, Büyükakçay said: "It is going to be a hard match in the first round; Hantuchova is a very experienced opponent."

The general manager of the Koza World of Sports facility that hosts the tournament Yavuz Selek said that they are proud of being a part of this organization and wished good luck to all the players.
Last Update: Jul 22, 2015 1:22 am
RELATED TOPICS